Why Chinese investors are shying away from Australia

Why Chinese investors are shying away from Australia

In Australia, mergers and acquisitions (M&A) are on the rise. But largely absent from this activity are Chinese businesses who, until recently, have invested heavily in our economy. Looking at the reasons behind this reduced investment, I think this trend could continue for some time to come.

It should not come as a surprise to readers that we are seeing a sharp increase in merger and acquisition activity in Australia. Notable examples are the recent bid for Sydney Airport, Spark Infrastructure, Seven Group’s ongoing purchase of Boral and Star Entertainment’s bid for Crown Resorts just to mention some of the highest profile ones. This is as expected as companies and investors are flush with cash due to the stimulus enacted by central banks across the world and this cash is naturally trying to find a use. We have indeed according to Bloomberg data seen M&A activity (both proposed and executed) of $127 billion year to day which is 30 per cent higher than the total value of $96 billion for the whole of calendar year 2020.

What we have Is not seen much recently is Chinese companies and investors involvement in this increased activity M&A in Australia. Chinese have historically been large investors into Australia but the flow of money has been in decline for quite a few years now as highlighted by a recent report from KPMG which highlights that in 2020, total Chinese investment into Australia fell to AUD2.5 billion. The absolute peak year of Chinese investment into Australia was in 2008 with AUD17.5 billion but as recently as 2016, AUD15 billion was invested so we are talking about a substantial drop. COVID-19 related travel restrictions and the general uncertainty about the economic outlook of course impacted this but even if we look at 2019, we can see that the total was not much higher at AUD3.4 billion as we can see from this chart below: 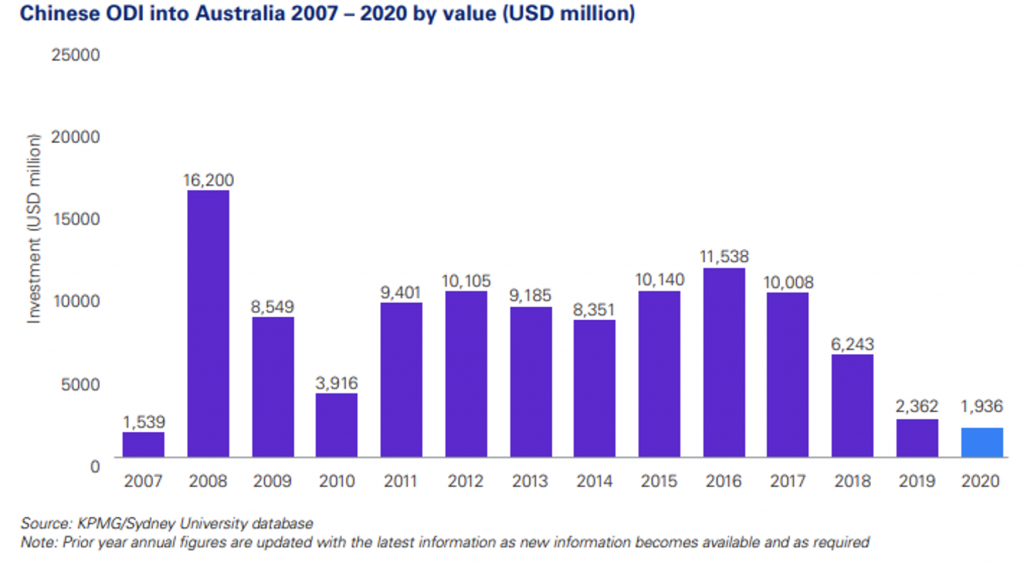 So why is this?

There are quite a few drivers behind this.

Firstly, China as a nation overall shifted its priorities and is focusing more on developing economies through its Belt & Road initiative where it is trying to build political influence through providing debt and equity capital for infrastructure investments as well as the resources and manpower to build said infrastructure.

Secondly and of course related, as is the case with the US and Europe, there has been a significant deterioration in the relationship between the governments of Australia and China and we have seen this resulting in Australia significantly increasing the powers of the Foreign Investment Review Board and new powers under a national security test to block deals that are not in the nation’s best interest. No doubt, Chinese politicians are likewise not encouraging investment in Australia and given the close involvement of the CCP in many Chinese companies, this is also having a dampening effect on the flow of investment.

Indeed, KPMG’s report includes the result of a survey of Chinese investors which shows that they are significantly more cautious when it comes to investing in Australia currently than just a few year ago with 65 per cent of respondents saying they are more cautious to invest in Australia due to the political debate which is quite an increase compared to a few years ago.

And there is a significant increase in the number that do not feel welcome to invest in Australia:

Based on these attitudes from Chinese investors and the bleak outlook for the political discourse between the countries (as I have written about here and here), I suspect that these trends will continue and that we will not see Chinese investors playing a large role in M&A in Australia going forward.