Why we need to reduce our reliance on China

Why we need to reduce our reliance on China

Just a few days ago, WA Premier, Mark McGowan called on the Federal Government to back down from any rhetoric that could be offensive to China. His concern, of course, is around his state’s mineral exports. But given China’s bullying tactics, surely a better response would be for our exporters to broaden their export markets.

A couple of months ago, I wrote a blog post looking at which sectors would be impacted if we cut our reliance on China as a destination of exports. The post created quite a stir on social media and generated considerable debate in the comment fields. This is a topic people feel quite strongly about and apart from trying to be an impartial observer while analysing investment opportunities, I am definitely one of them.

It is with quite a large portion of dismay that I read the comments by Western Australia’s premier Mark McGowan reported in the press on 15 June where he called for the government to “reset” the relationship with China which, if you read his comments, means a complete backdown from any rhetoric that could be construed as being offensive to China.

In my opinion, this is the last thing our politicians should do. It is clear to me there is a worldwide awareness and willingness to publicly acknowledge that a CCP run China is the major threat to global stability and safety and also an immoral regime with a horrendous record of human rights abuse etc. Speaking up against this, together with our allies, is not something we as a nation should refrain from.

I guess that Mr. McGowan is influenced in his views by the reliance that WA has on export revenues stemming from China. I would like to hear him argue for which of the 14 “grievances” on the list below – released by the Chinese embassy to media in November last year – that China apparently has with Australia that are worth not publicly arguing back against? Until he can convincingly do so, I would suggest Mr. McGowan focus his energy on trying to convince WA’s exporters to diversify their revenue sources and not be overly reliant on China.

Excuse the low quality screenshot here, this is an extract from the leaked dossier. 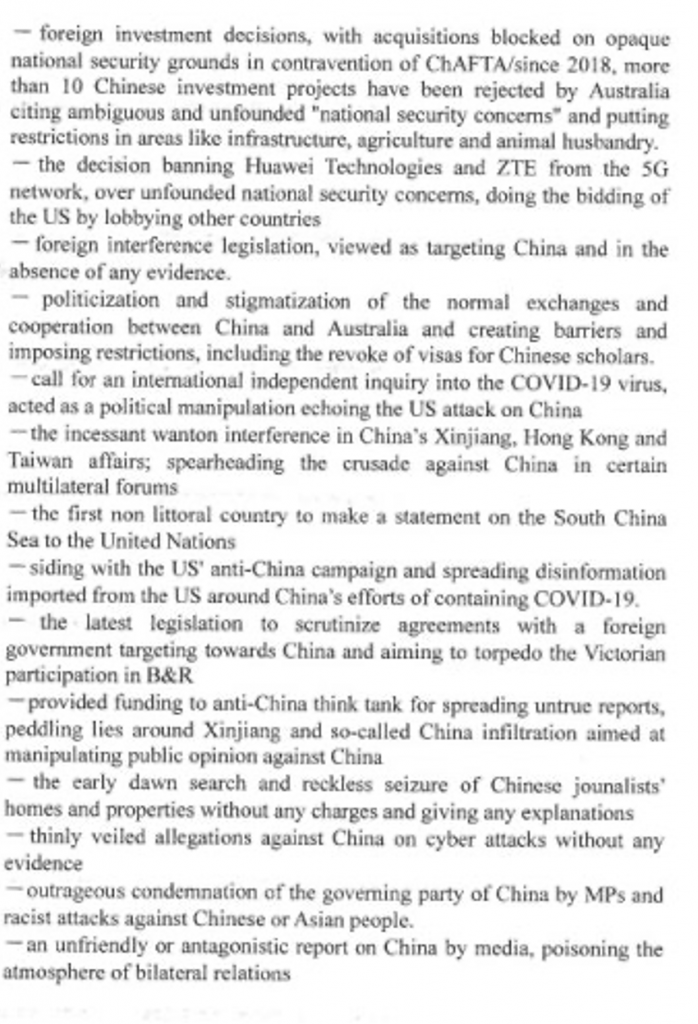