What will roar when the USD eventually reverses?

What will roar when the USD eventually reverses?

There is no question, as a consequence of the pandemic central banks employed radical unconventional monetary policy, alongside equally radical fiscal policy. In an ideal world, there would be no consequences, however every action must have a reaction. The reaction, with a substantial lag, of course, is inflation.

And now with inflation surging – albeit some leading indicators suggest it has peaked – the U.S. central bankers appear to be arguably reacting again, sending short-term rates and the U.S. dollar higher, and tightening liquidity by bringing the central bank’s balance sheet down.

The question is when and from what level?

Nobody knows and so, understandably, investors end up enduring volatility reflecting an inability to establish an equilibrium multiple of earnings because any status quo is ephemeral.

One view of the recent past is that economies grew steadily and inflation remained in check. Another view attributes the steady economic growth to precipitously declining interest rates. Either way, today, we are experiencing the consequences of artificially delaying or deferring a recession through the employment of unprecedented monetary and fiscal stimulus.

Some suggest the stimulus went on way too long, right up until inflation began emerging.

In other words, their view is the goose is cooked. The stimulus was overdone and this is reflected in the bond market with interest rates below the inflation rate and the yield curve flat.

As I have written about recently, the U.S. Federal Reserve has now flagged a reduction in its balance sheet, reducing liquidity at the same time it is raising interest rates. The risk of an overreaction that triggers a serious economic slowdown and even deflation is not zero.

According to Crossborder Capital the latest weekly balance sheet data from major central banks reveals policy liquidity shrinking at a steady 4 per cent clip in local currency terms and by a much weaker 17 per cent in U.S. dollar terms. Meanwhile, interest rate rises have spurred US dollar strength, which has exacerbated the liquidity tightening during 2022.

We don’t know whether a soft landing, a hard landing or something in between will transpire but we do know, the label will be determined by the reaction in the employment numbers. And then central banks will ease back on their tightening and the U.S. dollar will begin to reverse its hitherto interminable ascent.

Given the lagged response to rate rises investors nervously await the U.S. unemployment picture and its determination of a soft or hard landing or something in between.

In a hard landing scenario – unemployment rising dramatically, the stock market extends its current weakness amid a recession. And, perhaps somewhat exasperatingly, the U.S. Fed must eventually commence another round of interest rate cuts and bank credit guaranteeing.

If the actions of central banks since the year 2000 have taught us anything, it is that bigger rounds of stimulus are required to achieve smaller amounts of growth. So, the next one, in a hard landing scenario, would be a doozy.

That would trigger an enormous rally in markets. As Figure 1, reveals however emerging markets are historically cheap relative to the S&P500. If the U.S. dollar starts to reverse course, falling against cross-currencies, emerging markets will roar even more than the S&P500.

A rally in markets would probably also be triggered if, at a forthcoming meeting, the U.S. Federal Reserve resists the temptation to hike by 75 basis points, as currently expected, and instead hikes by 25 basis points or even skips a rate rise until the subsequent meeting, to allow the lagged effect to play out.

Given the effects of the liquidity injections in the second quarter of 2020 didn’t manifest themselves until the second half of 2020, it makes sense for the Fed to wait. But saving face means Fed Chairman Jerome Powell will need to appear to hold his resolve and deliver on his promises of not giving up until he sees inflation beaten.

Equities in aggregate are now poised on the outcome of interest rates. As I have written previously here at the blog, a bull market is unlikely to begin while rates are rising.

But that’s the aggregate.

Some themes will do better than others. We can’t ever be certain so we have suggested investigating several.

Energy security and decarbonisation are two themes we have written about previously.  More than 14 countries and 20 cities around the world have proposed banning the sale of fossil fuel-powered passenger vehicles (primarily cars and buses) in the near future. According to the International Renewable Energy Agency’s Electricity Storage and Renewables, Costs and Markets to 2030 report: “Electricity storage will play a crucial role in enabling the next phase of the energy transition. Along with boosting solar and wind power generation, it will allow sharp decarbonisation in key segments of the energy market.”

Since April when I wrote about those themes, investors in many lithium, cobalt, nickel and copper producers – the ingredients powering and building the energy transition – have done extremely well. Since April, Allkem (ASX:AKE) is up almost 19 per cent, likewise IGO (ASX:IGO), while Pilbara Minerals (ASX:PLS) is up 77 per cent. The Montgomery Small Companies Fund owns all of these names. They are arguably inflation-proof and recession-proof.  Of course, they aren’t stock market proof!

Meanwhile we could argue the U.S. dollar is historically expensive.  Cross currencies are at their lowest level against the greenback in decades.

As an aside, over the last two decades, I have frequently suggested the relatively safest time to trade currencies, with a long-term mindset, is when they reach historic extremes. For example, the AUD/USD exchange rate has traded above parody during two periods in the last 40 years – in the early 1980s and then again in late 2010. On the other side of the coin, it has traded below U.S. 65 cents over three periods – the late 1990s, the early 2000s and today. But that’s the point, the extremes are relatively clear.

The U.S. dollar will remain supported until the next recession, or until traders believe rate rises are done, and then it could drop precipitously. Investors could do well investing, with a ten-year time frame in mind, in currencies that benefit from a fall in the USD.

And a weaker dollar should be good for emerging markets. They remain relatively cheap compared to other equity markets and they tend to outperform when the USD falls. 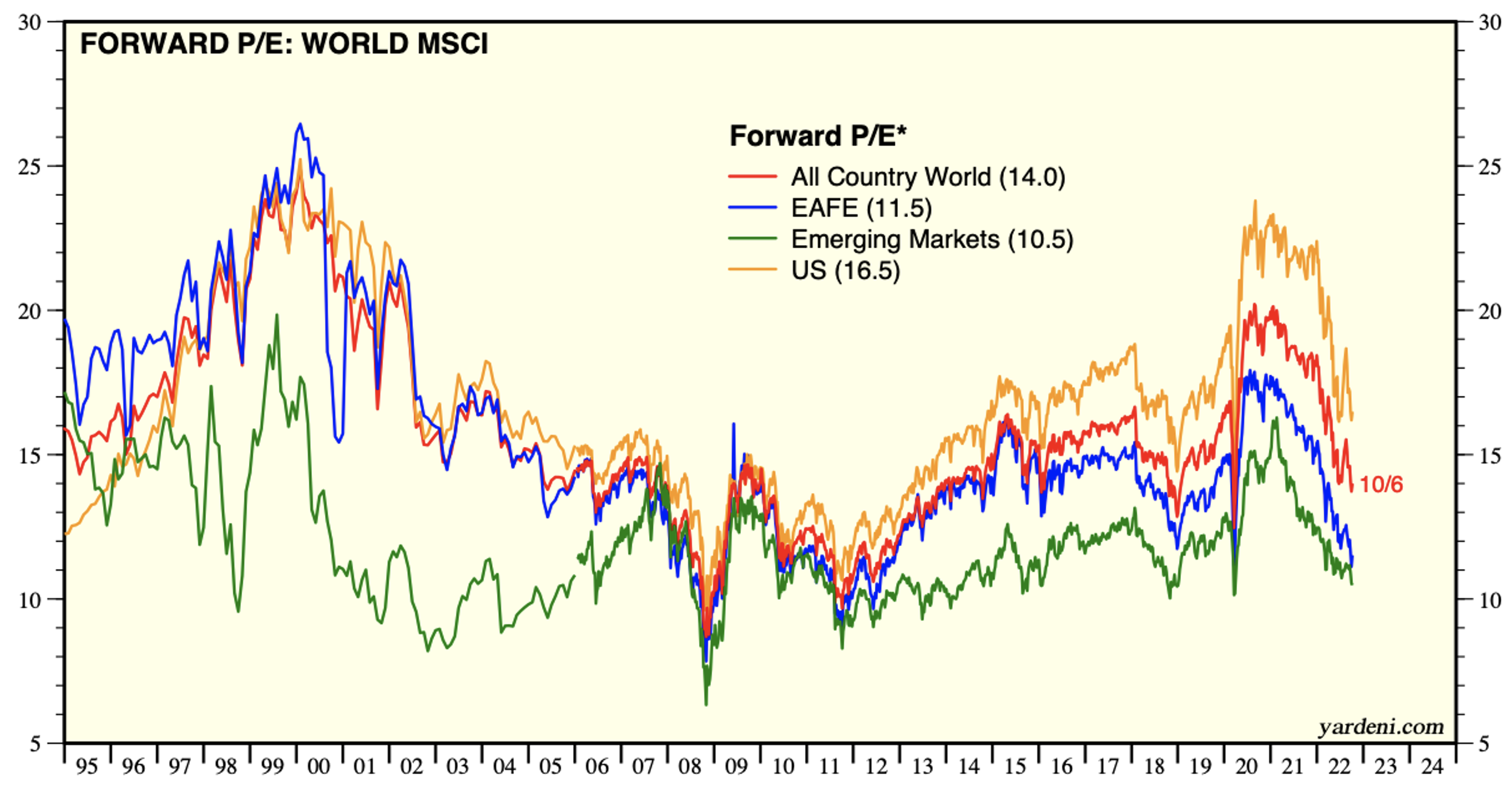 Not only do they appear to be relatively cheap, but their currencies could appreciate too giving investors, especially USD-based investors, a double dose of returns.

I recently discussed three possible scenarios to inspire the next bull market. Nobody knows which scenario will play out and therefore we don’t know whether the next bull market starts from similar levels to those seen now (soft and moderate landings), or from much lower levels (hard landing). What we do know is a bull market will eventually transpire and we also are reasonably confident the USD will give back some of its strength.

How are you thinking about preparing?

You can read my article on hree possible scenarios here:
THREE SCENARIOS THAT COULD KICKSTART A NEW BULL MARKET

The Montgomery Small Companies Fund own shares in Allkem, IGO and Pilbara Minerals. This article was prepared 19 October 2022 with the information we have today, and our view may change. It does not constitute formal advice or professional investment advice. If you wish to trade these companies you should seek financial advice.