Why it pays to invest when markets are heading south

Why it pays to invest when markets are heading south

Warren Buffett once observed that “In stocks, it’s the only place where, when things go on sale, people get unhappy.” Which is ironic, because bear markets give long-term investors a wonderful opportunity to make market-beating returns. And the lower the market falls, the more excited we should be about buying shares in quality businesses at knock-down prices.

In recent posts we have explained the arithmetic of investing when quality companies have endured compressed Price to Earnings (P/E) multiples, why I have decided to add to my small cap fund investments, that Warren Buffett’s Berkshire Hathaway has been buying, and we’ve offered some of the pithy Buffett quotes that serve to help navigate the current market gloom.

And today we offer another reason to consider becoming an optimist amid a sea of doomsayers: bear markets don’t last, they come to an end, and when they end it is because a bull market has begun. 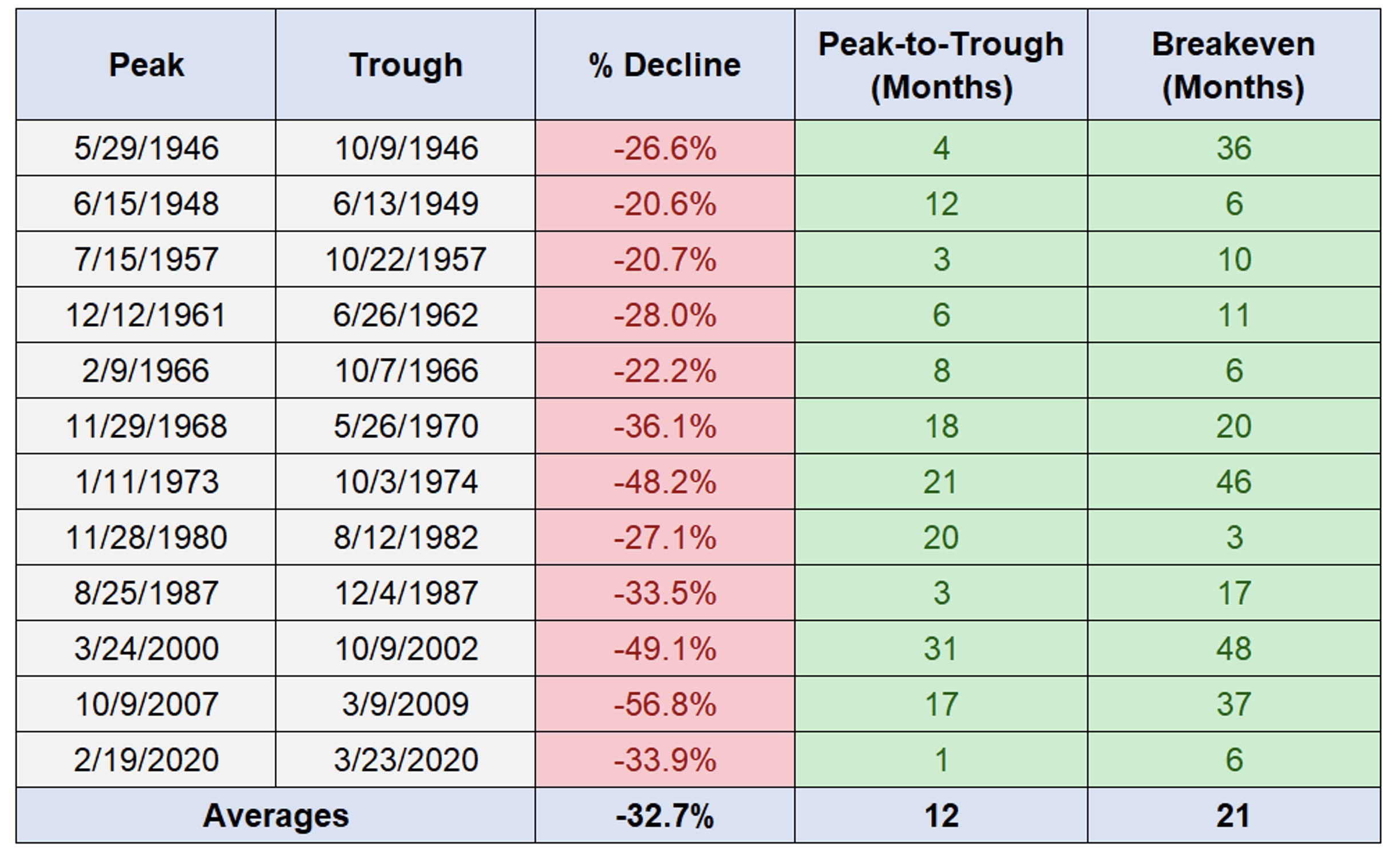 According to CFA analyst Ben Carlson (Table 1.), the average S&P500 bear market (measured from peak to trough) lasts a year and the average time to fully break even (as measured by the return to the previous peak) is a further 21 months.

Now, keep in mind, Carlson’s analysis is of an insufficient number of observations of bear markets since World War II for any findings to be statistically significant. Nevertheless, if we suspend that reality for a moment, history might offer some practical insights at least about the range of possible outcomes.

A further, and arguably more interesting, question to answer is; once in a bear market (a 20 per cent decline from peak), how long, on average, does it take to reach the bottom of the bear market?

Table 2.  How much further? 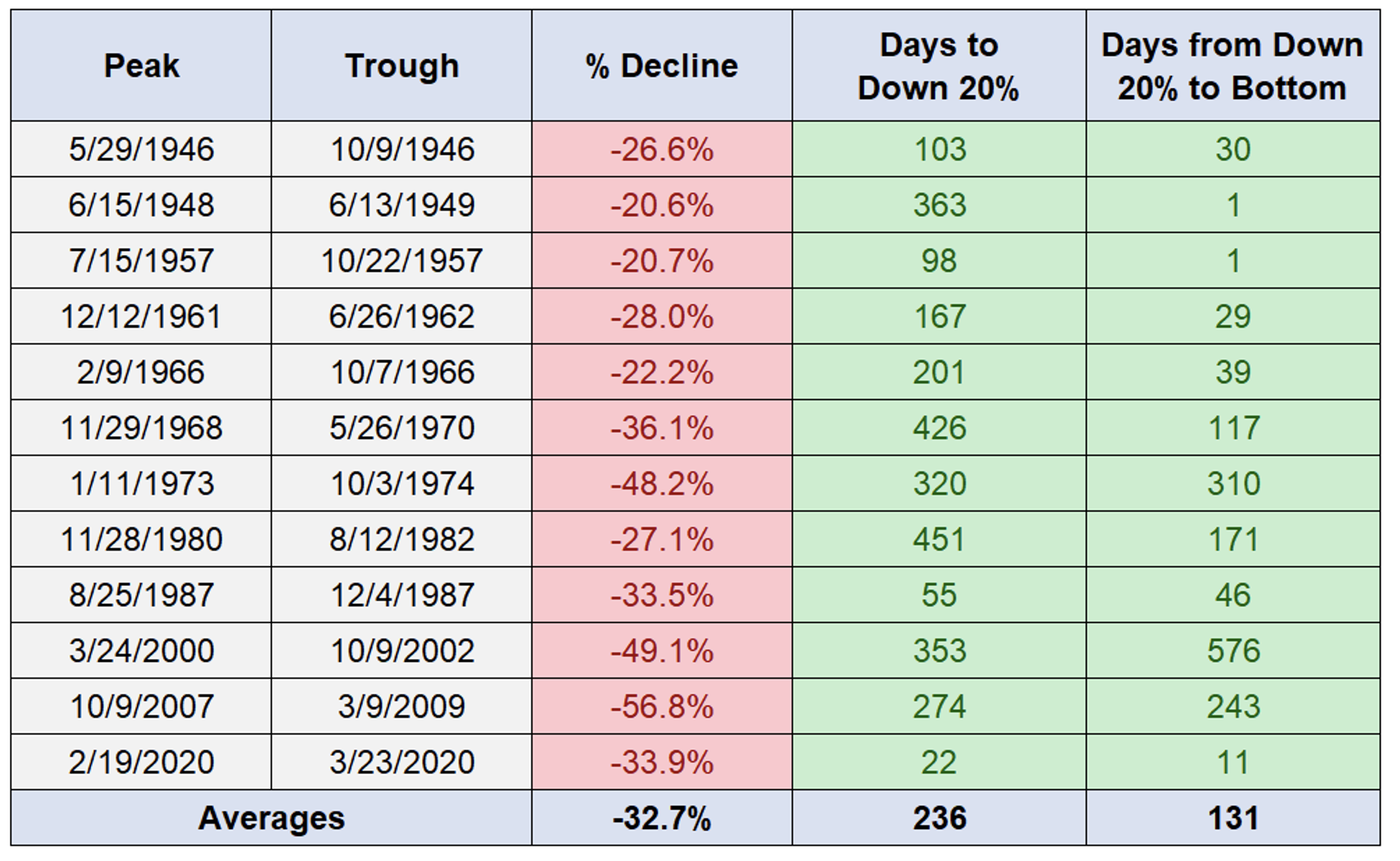 According to our own calculations, if the market takes the average time since WWII to reach its nadir, and then the average time again to recover its losses, the previous market peak will be seen again around 4 February 2024. Of course there are lies, lies and statistics.

Averages are often entirely useless; I could, for example, stick my head in an oven and my feet in a freezer and my average temperature would be about right. But I would be dead. So the above analysis is next to useless as a predictor of what will happen next.

The bear market will end

What is important however is that the work offers some reassurance the present bear market will end. And that’s why investing when times are darkest makes perfect sense.

But there is an even more helpful observation the above work reveals. The market is currently around 24 per cent below its all-time highs. We are confident it will eventually recover. We also know it takes, on average, about two years for the market to recover fully from the 20 per cent Bear Market signpost. And finally, for a full recovery from a 24 per cent slide, the market must rally 31.5 per cent.

If it takes two years for the market to rally 31.5 per cent, the equivalent Compounded Average Annual Return or Compound annual growth rate (CAGR) is 14.7 per cent. So that’s a return of 14.7 per cent per annum from here if some of the averages play out.

Let’s now take the worst post WWII experience and assume the market falls another 25 per cent from the peak (2000/02), takes 576 days to bottom, and then takes 48 months to recover (2000/02). The compounded average annual return from today, if it took five-and-a-half years for the S&P500 to regain the January 2022 highs, would be approximately 5.11 per cent.

Between the worst-case scenario (since WWII) to the average case, the returns on offer, from today, are somewhere between five per cent and 15 per cent per annum.

Finally, one of the most important investing axioms is this; the lower the price you pay, the higher your return.

If the market continues to fall from here, the subsequent returns as the market recovers to breakeven, will be higher. The lower the market falls, the more enthused you should become. Buffett once pointed out: “In stocks, it’s the only place where when things go on sale, people get unhappy.”

I trust you can now see why you should be salivating as stocks decline.

Our job, and yours, is not to invest in indices but to find businesses with faster than average growth and better than average balance sheet quality, competitive advantages and profitability. The odds of even better returns then rise further as we whittle down the stocks that comprise the index, to those that represent quality growth.

Some investors (yours truly included) prefer a fundamental basis for making assumptions. Historical patterns are seldom more than a rough approximation of what probably won’t happen.

“We don’t see a U.S. or global recession in ’22 or ’23 in our base case, but it’s clear that the risks of a hard landing are rising. Even if the economy does slip into a recession, however, it should be a shallow one given the strength of consumer and bank balance sheets.

“What does history say about returns around shallow and deep recessions? We studied market and sector return patterns around 17 U.S. recessions in the last 100 years, separating them into shallow (less than 3% peak to trough decline in GDP, 10 recessions) and deep (more than 3% GDP decline, 7 recessions).

“[With the market] down 23 per cent, are markets almost priced for deep, let alone a shallow recession? No. The decline in the market so far has been driven in the main by tightening liquidity, not fears of economic contraction. Even after a 30 per cent de-rating, Shiller’s CAPE for the S&P500 is still at 28.7x compared to an average of 23x ahead of deep recessions and 14x ahead of shallow ones.

“Inflation persisting at these levels and forcing tighter liquidity than already priced is the greater (derating) risk to the market. But as markets are pricing in growth levels close to trend, a firming up of recession expectations will also be a net negative.

“The good news on the tactical horizon is that growth surprises seem close to a bottom and bond volatility close to a peak. Also, this is happening at a time when sector correlations and measures of selloff breadth show that de-risking is no longer at an early stage. A breather in the selloff and a tactical rebound is likely. But none of this detracts from the facts that a) tighter liquidity is becoming a serious headwind for equity returns over the medium term, and b) a recession isn’t fully priced.”