How investors could benefit from the coronavirus

How investors could benefit from the coronavirus

Looking purely from an investing perspective, the global sell-off caused by the coronavirus pandemic could be manna from heaven for cashed-up value investors. I think we’re about to see some wonderful buying opportunities.

“Democracy destroys itself because it abuses its right to freedom and equality. Because it teaches its citizens to consider audacity as a right, lawlessness as a freedom, abrasive speech as equality, and anarchy as progress.”  Isocrates

I can’t completely concur with the ancient Athenian orator and teacher’s sentiments towards democracy, but I believe the Chinese leadership might have considered it prophetic up until their vulnerabilities were laid bare by coronavirus. Indeed, I would not be surprised if they thought their ambition to improve global governance under the auspices of their one ‘shared future for mankind’ was tracking well ahead of their expectations.

At the outset, let me make the observation that neither you nor I will be talking about coronavirus in five years’ time, let alone 10, 15 or 20-years’ time. That should provide the kind of perspective you require to navigate this period of market volatility successfully.

Obviously, if you have to sell stocks today, the coronavirus-related volatility is going to cause some pain, but if you aren’t in any urgent need to sell, the current volatility shouldn’t change your plans. And if you are anticipating cash inflows, or you are already holding cash – as we are – this event will prove very beneficial.

The framework for investing I promoted in my book Value.able, published ten years ago, is as relevant today as it was then: “Successful investing requires commonsense, but I am often staggered to discover that when it comes to investing on the stock market, commonsense isn’t all that common.”

Investors, who in normal circumstances might fear losing money, were willing to pay insane prices amid a fear of missing out. Back in early July last year, for Firstlinks, I listed some of the worst offenders.

Ten years ago I wrote in in Value.able: “By ignoring the prices paid and using their imaginations to value companies instead of their calculators, they lost fortunes”adding “When companies listed on the stock market make no money you cannot value them.”

When I listed the examples last year, I also noted that nobody could agree on when the insanity would end, nor how it would end. But end it apparently has. Here we are today, with more attractive opportunities than we have seen in a long time, delivered in one short week.

Because most stock market participants are emotional and impatient, we occasionally find prices diverge markedly from the underlying value of a business, producing opportunities for rational, long-term, value investors.

“Don’t fall into the trap of listening to the stock market. The market gets it wrong as often as it gets it right. The market is not wise; it should not be sought for counsel. Instead, it should be taken advantage of, rather than listened to. While prices are difficult to get away from, you must take a detached view of them.” Value.able 2010

In China the authorities’ attempts to corral the virus, in an area home to more than 320 million people and responsible for a quarter of China’s output, is already having a material impact on economic activity there. Over the weekend China released its February Purchasing Managers Index data (PMI), which is the government-published number that summarises the results of monthly surveys of enterprise purchasing managers. A PMI above 50 reflects an expansion of the manufacturing economy, whereas a PMI below 50 signifies a contraction. 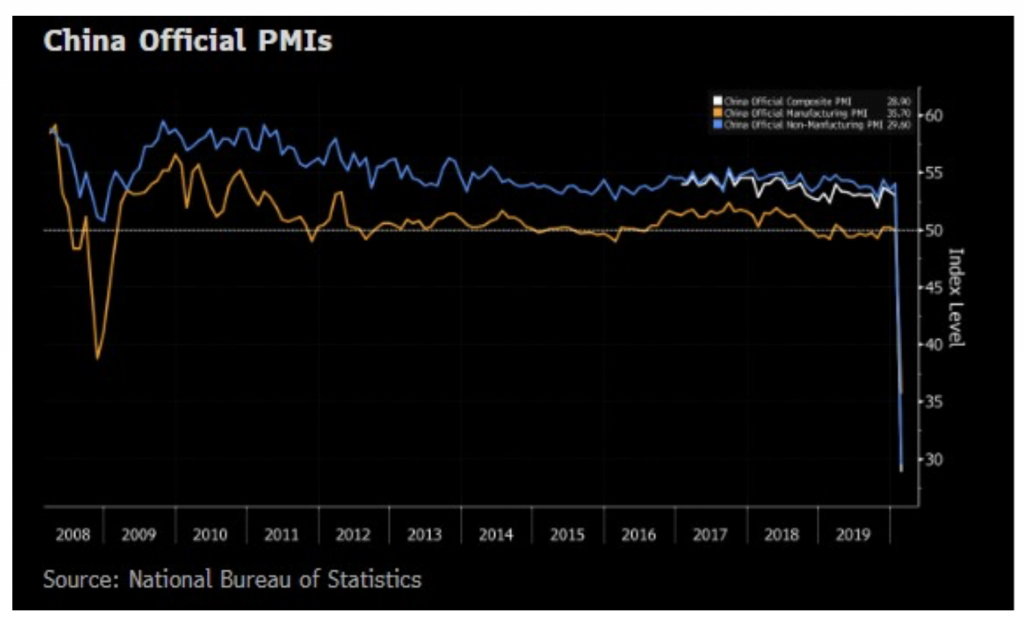 As Figure 1, reveals, China’s February PMI came in at 35.7, substantially weaker than even during the GFC when the lowest PMI recorded was 38.8. It is also lower than consensus estimates of 45. We hear anecdotes of a paralysed logistics industry as a lack of trucks to deliver goods to ports. Consequently, some ships are leaving Chinese ports 90 per cent empty. According to Alphaliner, a shipping data service, more tonnage of container ships is idled around the world now than during the global financial crisis and charter rates have plunged more than 70 per cent.

An increasing number of Chinese businesses are declaring ‘force majeure’ and seeking to delay, postpone, suspend or even cancel their contractual obligations. For business partners upstream and downstream, both domestically and globally, this development could have important ramifications on cash flows.

According to various lawyers, Chinese copper importers have already declared force majeure, cancelling purchase contracts.  Meanwhile several Chinese LNG importers have done likewise. There are also delays importing shipments of soybean and palm oil and many companies have the backing of the Chinese Government who has offered force majeure certificates to Chinese operators adversely impacted by the virus.

Meanwhile the virus has spread to 60 countries and it is believed the only reason the WHO has not declared a pandemic (and the reason Australia has essentially declared it early) is because China has placed enormous pressure on it not to do so.

A growing list of events have been cancelled globally, ensuring international travel will continue to plummet.

Events cancelled due to coronavirus fears

Last Friday, the Swiss government also announced an immediate ban on all “public and private” events in the country involving more than 1,000 people, while it was reported Giorgio Armani warned guests not to attend Milan’s Fashion Week and opted to live-stream the event.

It is reasonable to expect further disruption to business and in order to protect cashflows, larger companies with market power will lean on suppliers by delaying payments or requesting discounts for prompt payment. With this in mind the Reserve Bank has warned the coronavirus outbreak poses a material risk to the Australian economy.

Investors are only just waking up to the global concern and the extent of the potential disruption. As we have constantly written, this cannot be contained by countries more liberal than China, such as the US, Italy and France, as they lack the ability to enforce such draconian measures as completely shutting down all civic activity. And with the first cases being reported in Africa, where medical assistance is virtually non-existent, the possibility of a contagion is immediately apparent.

Market premiums have reduced amid last week’s sell off. As Figure 2 demonstrates, the forward PE for the ASX 300 has declined to levels seen in June 2018, when Australian 10 Year bonds were yielding 2.65 per cent. Today they are yielding 0.70 per cent.

As we have written many times in the past year, low rates are supportive for asset prices but they don’t render markets immune to sell offs from time to time. These sell offs are manna from heaven for value investors with cash on the sidelines.

The key to the next step for markets will be whether the contagion spreads to credit markets impacting liquidity. Weaker cash flows, as described earlier, do put real world pressure on companies’ ability to meet their debt obligations and if this translates to lower willingness to refinance, the outlook could turn very bleak.

At Montgomery we have never been smitten with companies loaded with debt and indeed lower levels of debt help define the quality we seek. Companies with the ability to sustain high rates of return on incremental equity, without much need for debt are, by our definition, quality businesses.

Nevertheless, any emergence of broader concern for a liquidity crisis would put even more pressure on stock prices and it is in such environments that we believe real value will emerge.

But it’s important to remember that the panic could be worse than the pandemic. While market’s certainly have not factored in the possibility that credit flows cease, causing a cascading series of credit events that lead to wider spreads and corporate bankruptcies, they may also forget that human beings are resilient, adaptive and extraordinarily durable. A vaccine may be developed much sooner than the 18 months currently being forecast and warmer temperatures in the Northern Hemisphere, as summer approaches, could reduce the rate of the virus’s spread.

Coronavirus and its impact on supply chains has its positives too. It could accelerate the development of decentralised manufacturing and 3D printing.  It could provide restocking opportunities following a hoarding panic and it will increase the adoption of stay-at-home entertainment offerings.

Meanwhile, according to the New York Times, “Chinese government agencies have announced a series of measures in the last few days aimed at getting the country’s trucking fleet and ports humming again.”

Fortunately, our quality and value framework is helping us make sensible decisions, just as it did when it suggested we refrain from investing in the high beta, high growth stocks of 2019 – those with the heroic valuations.

When investing we’ll put coronavirus to one side. We’ll look at Macquarie Group, which we own, and which has 354.4 million shares on issue trading at $134, for a market capitalisation of $47.5 billion, and ask: is Macquarie worth more or less than $47.5 billion?  The answer to this question matters more than whether the shares will rise or fall in the next week or next month.

The Montgomery Fund and Montgomery [Private] Fund owns shares in Macquarie Group. This article was prepared 03 March with the information we have today, and our view may change. It does not constitute formal advice or professional investment advice. If you wish to trade Macquarie Group you should seek financial advice.