Why revenue growth should accelerate for Australian Finance Group

Why revenue growth should accelerate for Australian Finance Group

While achieving revenue growth is proving to be challenging for the banks at present with the impact of ultra-low interest rates and the effects of the Hayne Royal Commission, there are parts of the credit market that are generating very strong growth.

Australian Finance Group (ASX:AFG) recently reported its result for the six months to December, with revenue growing 3.1 per cent on the same period in 2018, and underlying trends are pointing to a significant acceleration in revenue growth in the second half of the financial year.

There are two parts to AFG’s business: 1) the mortgage broking aggregation business and 2) the securitised mortgage business AFGS.

Commission revenue in the mortgage broking aggregation business fell 1.1 per cent due to the fall in mortgage settlements in the broader market as a result of tightened mortgage servicing requirements. AFG’s aggregation business is exposed to the volume of mortgage settlements rather than the amount of overall mortgage debt in the market. Increased minimum servicing requirements reduced the volume of mortgage applications over the last couple of years.

However, the removal of APRA’s minimum servicing hurdle rate in June last year, combined with the two RBA rate cuts saw mortgage applications bottom in the middle of 2019 and then rebound strongly in the second half of the calendar year. The benefit of the recovery only began to show up in AFG’s numbers toward the end of the year as it records commission revenue upon settlement of the mortgage, which generally occurs between 8 and 10 weeks after the application is lodged with the lender.

While total mortgage settlements fell 2.5 per cent for the six month period, settlements grew 6 per cent in the December quarter relative to the prior year, indicating a material acceleration through the half. Additionally, the company commented that application lodgements were up 25 per cent in January indicating that the growth rate is likely to continue to accelerate in the second half of FY20.

Partially offsetting the benefit of stronger growth in settlements in the second half is likely to be a smaller accrual for future trail commissions as a result of a recovery in refinancing activity. This will reduce the assumed average life of mortgages written by AFG and therefore the number of years of trail commissions that AFG can expect to generate from the mortgages it has originated.

The mortgage securitisation business also reported very strong results in terms of both growth in the mortgage book and net interest margin (NIM). AFGS mortgage settlements increased 46 per cent in the period to A$690 million, while the total outstanding balance on AFGS mortgages increased 52 per cent to A$2.514 billion.

Net interest margins increased primarily as a result of the contraction in the spread between the bank bill swap rate, which is the reference rate linked to AFG’s wholesale funding costs, and the average rate of interest earned on the AFGS mortgage book.

In Australia, the majority of mortgages are variable rather than fixed rate loans. For historical reasons, the variable rate charged is measured against the official overnight rate set by the RBA. However, wholesale funding of the book is linked to the 3-month bank bill swap rate (BBSW). While BBSW moves with the official RBA rate, they are not the same for a couple of reasons.

First, BBSW is a 3-month rate rather than an overnight rate. Therefore, it reflects the market’s expectations for what the RBA rate will be over the next 3 months, not just the next day. Additionally, BBSW is a reference rate for lending to banks. As such it implies a credit spread relative to the RBA official rate.

As the spread between the official rate and BBSW expands and contracts, the NIM of wholesale funded mortgage providers like AFGS moves in the opposite direction. The cost base of the major banks tends to dictate the pricing of mortgages. Therefore, AFGS is a price taker in the mortgage market.

With around two thirds of major bank funding sourced from deposits, their funding costs are less influenced by movements in the spread between the BBSW and the RBA official rate. This disconnect has become even more pronounced as a result of the current extremely low interest rate environment. This is because a large proportion of the deposit base is represented by transaction accounts that are already earning little or no interest.

Because they already earn close to zero interest, the banks cannot reduce the funding cost on these deposits if the RBA cuts the official rate any further. This is why the banks have only been able to pass on part of the recent RBA rate cuts to their standard variable mortgage rates.

With the majors able to pass on an increasing lower proportion of any future RBA rate cuts, there will be a growing disconnect between the interest rate earned by mortgage securitisation businesses like AFGS and their wholesale funding costs which are linked to BBSW.

The chart below shows the average BBSW to RBA overnight rate spread for each of AFG’s 6-month reporting periods over the last 4 years as well as 2H20 to date. This is compared to the net interest margin generated by AFGS over the same period, demonstrating the negative correlation between the two data points in each period. 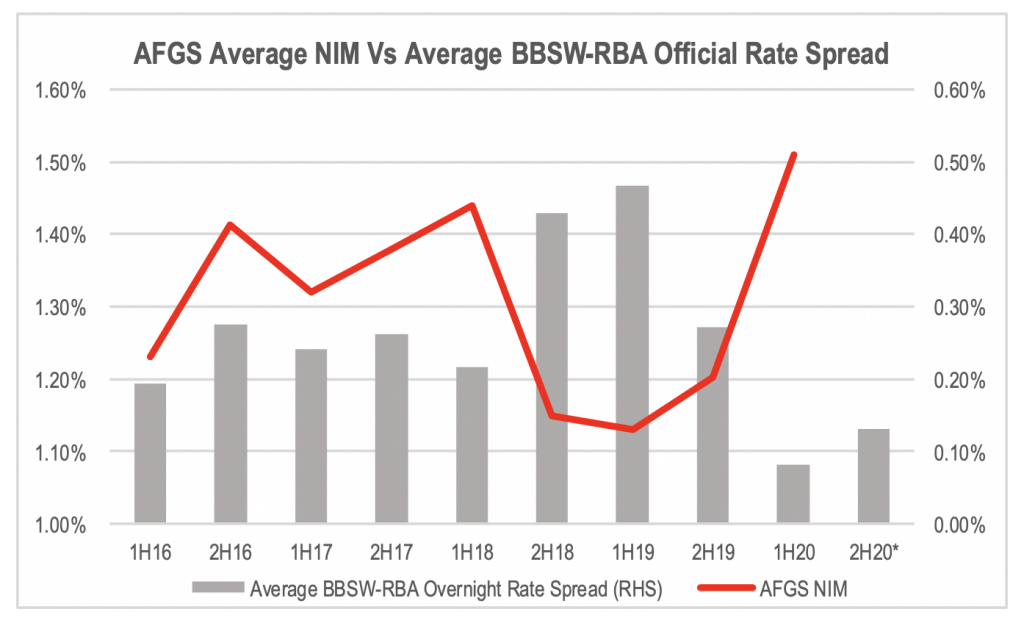 The current market concern regarding COVID-19 has two implications for AFG’s mortgage securitisation business. First, the market is now factoring in a step up in the amount of monetary stimulus that the RBA will provide in coming months. The 3-month BBSW has recently fallen 13 basis points below the current RBA overnight rate, suggesting the market is expecting the RBA to lower the rate by another 50 basis points. 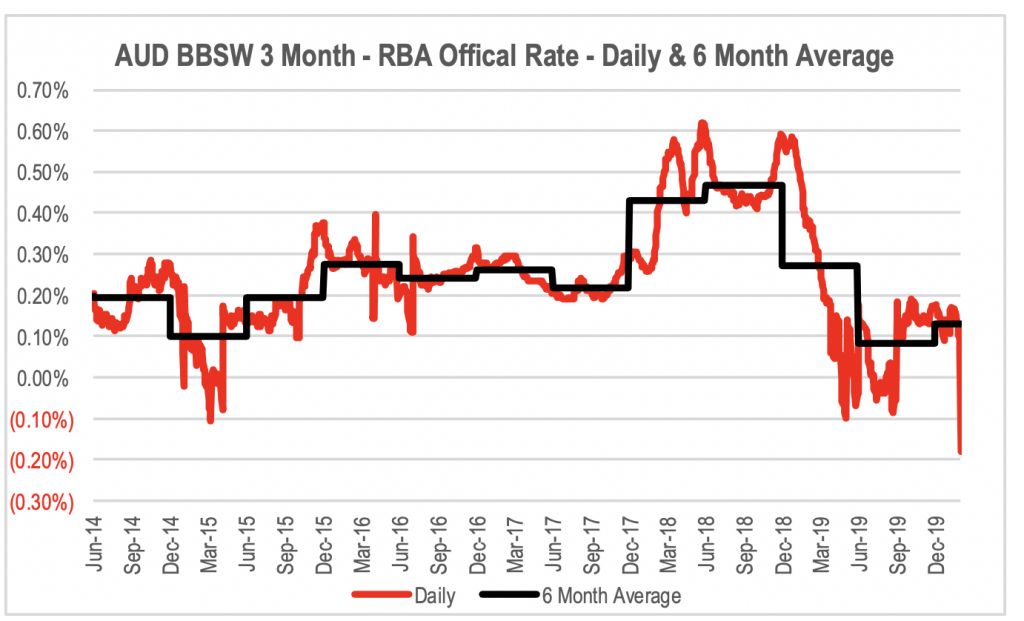 This will be providing AFGS will a margin uplift given the reduction in its funding costs, while the returns it generates from its mortgage book will remain relatively flat until the RBA cuts its official rate. Even when that occurs, AGFS’s NIM is likely to remain higher than last period given that the banks will not be able to pass on the rate cut in full without reducing their margins.

However, if the impact of COVID-19 on economic growth results in a global credit markets freeze like we saw after the collapse of Lehman Brothers in 2008, mortgage securitisation businesses like AFGS could struggle to raise funds from the wholesale markets, increasing spreads or even, in a worst case scenario, causing a liquidity squeeze.

At this stage, we view the worst-case scenario as being a low probability based on current information, but we keep a watching eye on corporate credit markets for signs of emerging dislocation.

However, the probability of continued margin expansion on the back of lower wholesale benchmark interest rates is relatively high, creating an upside return skew for the stock, particularly after the fall in its share price over the last week.

You are reading an article about: Companies, Financial Services, Stocks We Like