Get set for a major public stoush over immigration

Get set for a major public stoush over immigration

It’s probably no surprise that NSW Premier Dominic Perrottet – now expecting his seventh child, and with 11 siblings of his own – should be in favour of a ‘Big New South Wales.’ And urged on by leading bureaucrats, the new state Premier is backing a five-year doubling of the pre-pandemic migration rate, which he says will help boost the economy. But recent surveys show his views are in stark contrast to those of the general population.

A while ago, I wrote a blog post about Treasury’s 2021 Intergenerational Report highlighting the assumptions of very high levels of immigration for a long period of time. In that post, I also mentioned the result from the survey that The Australian Population Research Institute (TAPRI) did in October 2020. TAPRI has released their updated survey and, given the recent press reports of various politicians, lobby groups and government departments calling for a resumption of high immigration (NSW Treasury and Australian Chamber of Commerce to mention two that have come out publicly recently), I thought it would be interesting to see if anything has changed in the Australian population’s views of immigration.

The first question TAPRI asked “When our borders reopen which of the following would be closest to your views?” and the results show only 19 per cent of the population want to return to the pre-pandemic level of about 240,000 per year while 70 per cent say they want lower levels and 48 per cent want a much lower or even nil level:

The reasons given by the people who said that Australia does not need more people were spread pretty evenly between the impact it will have on infrastructure, concerns for the environment and the upward pressure immigration has on house prices: 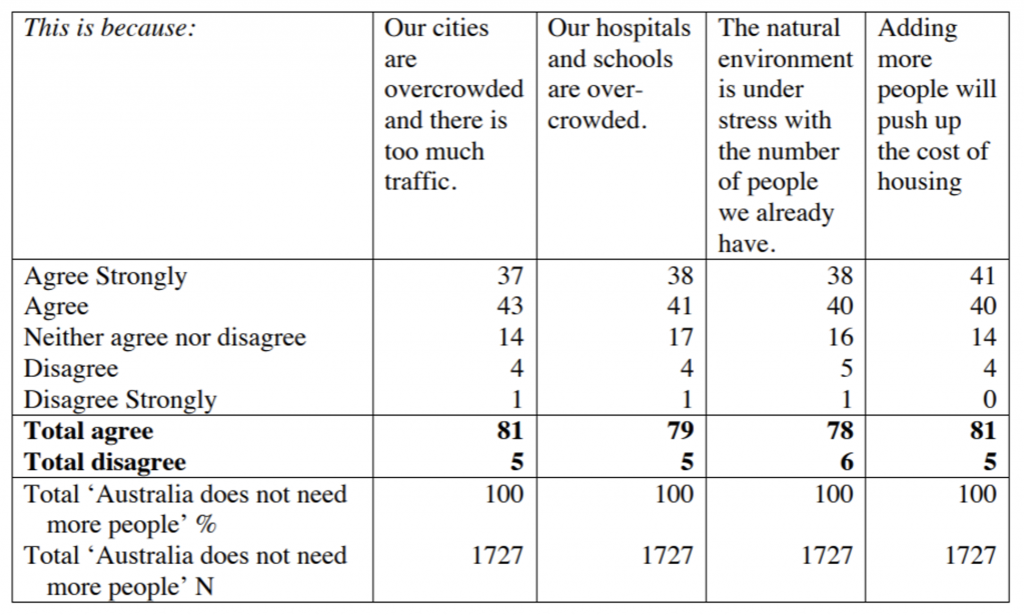 I have in a number of blog posts (Should we import cheap foreign workers, or pay locals more?) highlighted how dependent a number of industries in Australia are on cheap imported labour. It is therefore interesting to see the answers to the second question TAPRI asked “Many employers now argue that we must open the borders as soon as possible, to allow temporary and permanent migrant workers in to help the economy. What do you think?” which shows that a large majority of the population do not want to see this happen and instead prefer that these industries deal with worker shortages by becoming more attractive industries to work in for locals (or through increasing productivity as I have argued before):

There have also been strong calls from universities and the wider education sector to re-open borders as quickly as possible for international students. The education sector lobby groups often cite that educating international students is a $40 billion export industry but this is a widely inflated number as I have written about in this blog post. It is interesting to see the population’s reply to the question “Before the pandemic Australia’s universities recruited large numbers of overseas students. In 2018 they made up 32 per cent of all new student enrolments. The universities want governments to allow these numbers to be restored to their pre-COVID levels. Which of the following is closest to your views?” where it seems the average Australian believes that universities have become way to dependent on international students as a revenue source and are not serving domestic students as intended:

Given that both the major political parties are supportive of a high level of immigration, this survey shows there seems to be a big disconnect between what voters want and what most of our elected politicians want. So we question the motivation behind this and ask why there is no public debate about what the right level of immigration is? What is clear though is it is not healthy for our democracy not to have this debate because it will eventually give rise to extreme parties that will approach this issue in less than pleasant language, creating divisions within our society, which is something we should all strive to avoid.