A very small growing fish in a very large pond

A very small growing fish in a very large pond

Aristocrat Leisure Limited (ASX:ALL) has diversified its exposure beyond gaming machines over the last six years with a push into the online, and more recently the mobile games market. This began with its acquisition of social casino business Product Madness, and the internet gaming system and remote game server from GameAccount Network in late 2012 for around A$32 million.

At the time, Product Madness was a top five social casino operator with around 500,000 daily active users but was unprofitable. By adding its gaming content to the platform, and increasing the level of investment in the business, Aristocrat was able to grow the number of daily active users to around 2 million and average revenue per daily active user from US$0.09 to US$0.56 over the next six years.

Aristocrat significantly stepped up its bet in the online space this time last year with the acquisitions of social games developer Plarium for US$350 million followed by US based social casino and social games platform Big Fish. Outside of an acquisition in 2014, these were the largest acquisitions ever undertaken by Aristocrat.

The social casino and social gaming markets are growing and evolving rapidly.

At its investor day in May, Aristocrat estimated the size of the two markets globally: the social casino market US$4.5 billion; and the social gaming market is US$45.9 billion. This is expected to grow by 13 per cent a year over the next three years to around US$73 billion making it as large as the overall console and PC gaming markets globally.

This suggests Aristocrat has around 13-14 per cent of the overall global market, and is the clear number two player behind industry leader Playtika. 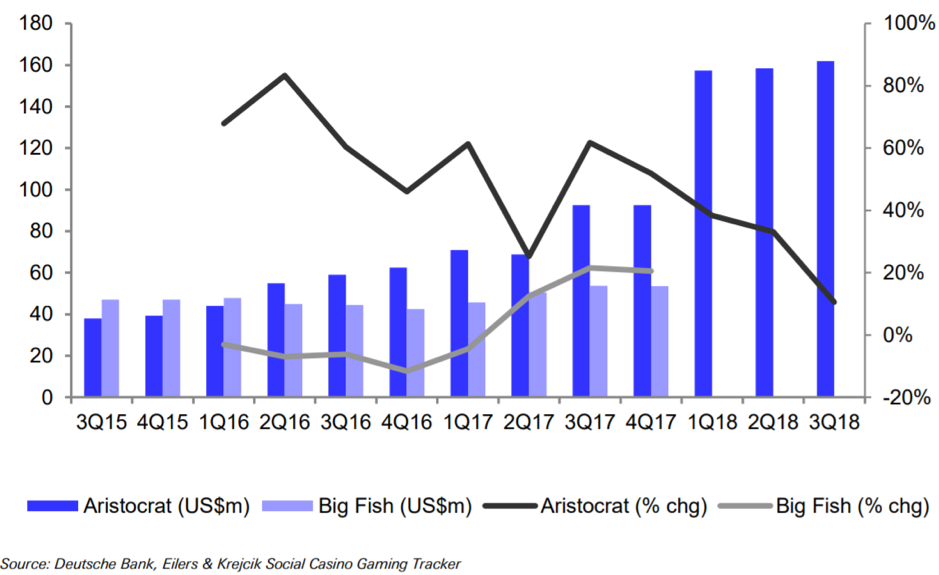 However, the slowdown appears to have been felt across the industry with Aristocrat maintaining share in the period. Encouragingly, industry revenue growth has reportedly recovered in September and October.

In social gaming, Aristocrat is a very small fish in a very large pond (pardon the pun). With proforma revenue of around US$550 million in the 12 months to March 2018, the company has just over 1 per cent of the global market. Aristocrat is minnow in this market behind established players like Activision and Tencent.

It appears revenue has been largely flat in this part of the business over the last six months as mature legacy games like Vikings and Gummy Drop are rolling over and the company releases new games that are very immature.

While the social gaming space provides Aristocrat with an enormous amount of upside, the business will require a significant increase in investment to broaden its portfolio across the various categories in the market. This is likely to see earnings and margins weaken in the near term for this business.

Success in the part of the market is far more uncertain than in the social gaming space given the company’s weaker position, and far more limited value add in terms of content, but the potential growth upside is also far greater in the long term.

The digital businesses offer the company material earnings growth potential that could drive the company’s overall earnings growth as the earnings from its core land based gaming business begin to peak on the back of its current significant product advantage.

However, there is also far greater uncertainty regarding the company’s success in this market given the immature and rapid evolution of the market and the popularity of individual games with consumers.

The Montgomery Funds own shares in Aristocrat Leisure Limited. This article was prepared 26 October with the information we have today, and our view may change. It does not constitute formal advice or professional investment advice. If you wish to trade ALL you should seek financial advice.

You are reading an article about: Editor's Pick, Stocks We Like, Technology & Telecommunications