What’s up in the stock market?

What’s up in the stock market?

With just a trading day left in October 2018, US stocks look set to record their worst result in a calendar month since February 2009 – when the global financial crisis was in full swing. This prompts a few important questions for investors: were stocks so expensive that a correction was due? Are stocks expensive now? And, if stocks aren’t so expensive anymore, then should everyone be as worried as they seem?

On September 20 2018 the S&P500 index, a measure of US stock prices, closed at its highest-ever level of 2,931. To this point US stocks had risen 17 per cent over the prior 12 months, 37 per cent in the previous two years, and were up more than four-fold since the depths of the global financial crisis at the beginning of 2009. The chart below shows this strong run in US equities. 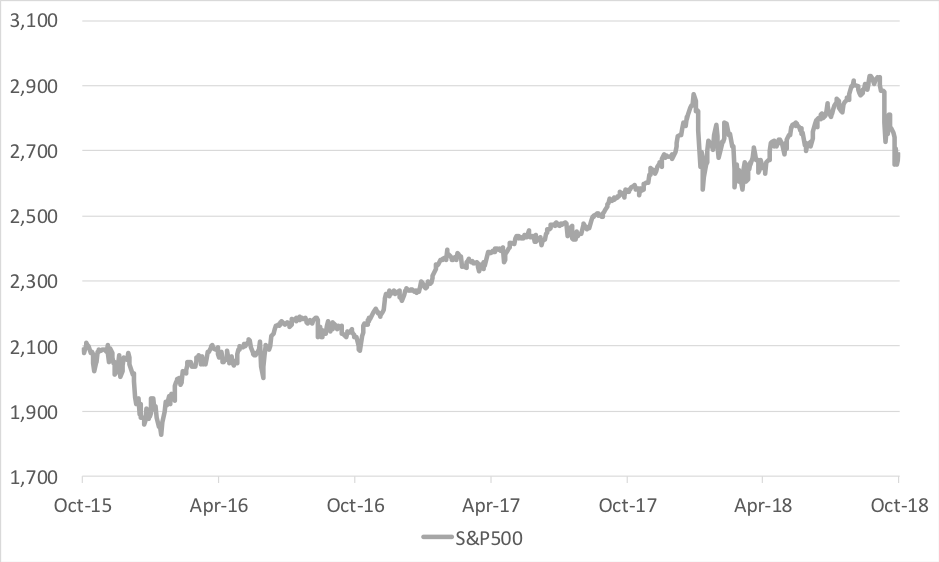 For some time leading up to this day in September it wasn’t difficult to find news headlines, research analyst reports, and technical analytics screaming out that stocks had become overvalued. This was especially the case given the share market’s unabated rise since President Trump’s election at the end of 2016 and the extraneous risks pervading financial markets in the shape of geopolitical tensions and normalising monetary settings. However, we see the setup differently.

Like him or not, Trump and his administration have had an objectively positive impact on corporate profits and therefore the value of stocks. This is not determined by a view on economic growth going forward, or how the trade war with China may play out. Rather, Trump effected an immediate step-change in the earnings of most American businesses by cutting the corporate tax rate.

At the end of 2017, Trump succeeded in passing the Tax Cuts and Jobs Act, under which the corporate tax rate in the US was reduced from 35 per cent to 21 per cent effective 1 January 2018. All else equal this means that US companies would now retain 79 cents for every dollar of pre-tax earnings generated compared to just 65 cents previously. The resulting mark up on after-tax profits, all else equal, would therefore be 22 per cent. It would be reasonable to expect that the value of stocks should rise by the same proportion as the uplift in earnings attributable to shareholders. This wasn’t the case.

In late September 2017, when the notion of a possible wholesale cut to the corporate tax rate was made public, the S&P500 traded at around 2,500. With some expectation of a 14-percentage-point tax cut, and a corresponding 22 per cent boost in after-tax earnings, it would be fair to assume that stock markets should have repriced upwards to around 3,050 (22 per cent higher than their level at the time).  Yet it took until September this year for US stocks to trade at a level that more fully reflected the tax break from the government – and even at its peak it fell slightly short.

The following chart shows the S&P500 in grey and the tax-cut adjusted value of the index in red. The adjusted series is calculated by taking the S&P500 and dividing by a factor of 1.22. We do this to remove the positive effect of the tax cuts from the value of the stocks, and make the series following the proposed changes in the tax code comparable to the series before that. We notice two things.

US stocks adjusted: S&P500, S&P500 adjusted for Trump’s tax cuts, and what the peak represented 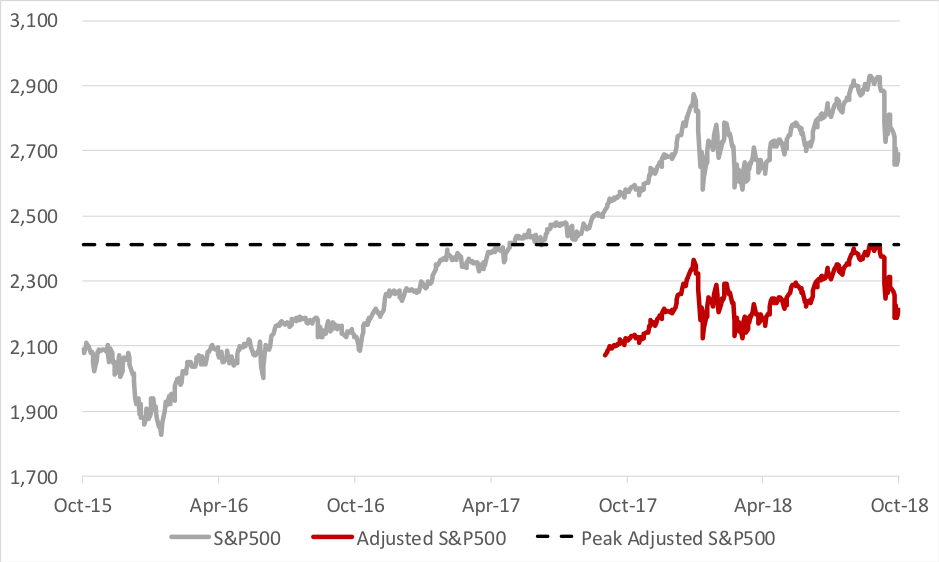 Firstly, the index did not jump at the prospect of the cut to the tax rate. The adjusted series therefore did not immediately connect with the original index. It took until the end of January this year for the red line to rise to a level close to where it was in September 2017 when the tax cuts were proposed. It appears the market had a delayed reaction to the benefits of the government taking a lesser share of earnings away from shareholders. At the same time revenues and earnings have grown, so stock valuations (multiples) have de-rated in this period.

Secondly, the series both peak at 2,411 on September 20 this year. The black dashed line represents the peak of the adjusted index series, and it intersects with the unadjusted level of the S&P500 back in May 2017. So, at the highest level of the S&P500 has traded, it was still only comparable to stock prices about a year-and-a-half earlier. Again, we would make the point that revenues and earnings are higher, and the market has de-rated.

What we are arguing here is that over the last year (before this month’s sell off), or more, the strong run up in share prices can be accounted for by changes in the tax rate alone. Any return from investing in stocks has come from Trump’s tax cuts. And in fact, the market has de-rated with respect to higher revenues and pre-tax earnings.

This month to date, the S&P500 index is down by almost 10 per cent. That sort of monthly decline is rarely ever seen – it’s only been worse in four months over the past 30 years – and represents a meaningful correction in US stock prices. The following chart shows how the current level of stock prices compares to pre-tax cut levels.

US stocks adjusted: S&P500, S&P500 adjusted for Trump’s tax cuts, and where stock prices are now 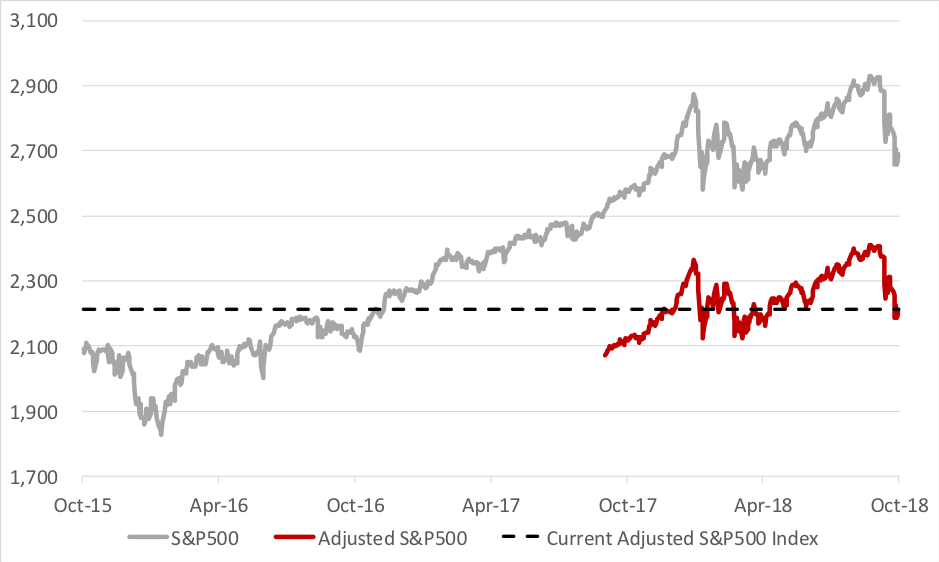 The current level of the S&P500 adjusted for tax cuts has fallen to 2,211. This is represented by the black dashed line which intersects the S&P500 series back in December 2016, right around the time Trump became President. It is reasonable to conclude that if we remove the impact of the tax cuts, stocks are trading at levels post the October sell-off that are comparable to the levels they were trading at about two years ago, despite higher revenues and pre-tax earnings.

Stocks aren’t being valued any differently to what they were when Trump came to power, despite the rise in the S&P500. And all the gains in the stock market over this longer period (through October) can also be attributed to Trump’s tax cuts. Outside of this the market in and of itself has given investors nothing.

We can see this in another way by looking at the market’s forward price-to-earnings ratio in the chart below. The S&P500 trades at 16x forward earnings today, a level that hasn’t been seen since the beginning of 2016 – in the days when Trump was still on the campaign trail.

US stocks have de-rated…to early 2016 levels 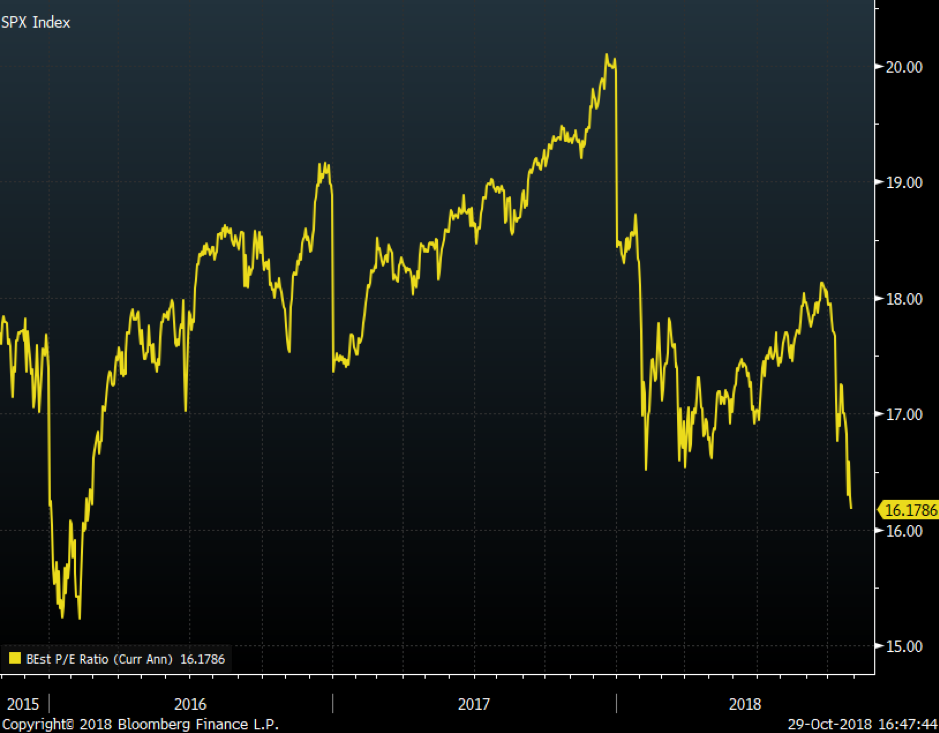 Cut a few different ways our analysis is telling us that stocks, at least in the US, may not ever have been as expensive as superficial measures may have suggested.

Moreover, following the October sell-off in the equity market, stocks appear to be trading at much cheaper levels than we have seen in a long while. To us this suggests an expanding opportunity set.

We expect this will manifest itself in higher gross long exposure in the Montaka funds, which may result from additions to existing portfolio holdings and/or the addition of new stocks to the long portfolio. This is an organic result of our position sizing framework and naturally gives rise to us owning stocks at ever-cheaper prices, and higher prospective returns.