With oil & gas companies paying no tax, is it time to trigger the ADGSM?

With oil & gas companies paying no tax, is it time to trigger the ADGSM?

For some years, there have been loud complaints that the Federal government has failed to deliver an effective energy policy that provides affordable, reliable and low-emissions electricity. This policy failure has resulted in soaring domestic energy prices. To make matters worse, oil and gas companies are paying close to zero tax. To my mind, it’s time for the new government to trigger the Australian Domestic Gas Security Mechanism.

Back in January, I published a blog post looking at the LNG industry in WA and what it is really worth to the WA economy and concluded it’s contribution is not much at all and significantly less than the resource companies try to portray.

On  May 16, the oil and gas industry association APPEA (Australian Petroleum Production and Exploration Association) held a conference in Brisbane where it aired warnings to the incoming government not to take any misguided actions that could damage the prospects for the industry and put at risk the $500 billion/year benefit to the Australian economy that APPEA claims the industry contributes.

This number of $500 billion/year is quite intriguing given recent research from The Australia Institute shows that most of the industry participants pay no tax at all and that the total tax paid in  2018/19 (the most recent year for which data is available) was $1.7 billion on total income of $110 billion or a tax rate of about 1.5 per cent.

Indeed, based on data from the ATO, five out of the six largest oil and gas producers have not paid any income tax since 2014 and the one which has (Santos) has paid a total of $6 million. This compares to total income of approximately $166 billion for the six companies combined as we can see from this table:

It is also interesting to note that APPEA commissioned and published a report back in 2013 projecting that the total Commonwealth income taxes from the QLD LNG developments would be $58 billion over the project lifetime. Now it is not unusual for large projects with heavy upfront investment to have large deductibles early in their life that minimise the tax they pay, but this report actually projects the amount of tax to be paid each year. Comparing these projections with the actual outcome is quite stark reading:

Up until 2020, the owners of the LNG export projects had paid a total of $0 in Commonwealth income taxes compared to the projected approximate $11 billion.

This analysis does also not include the negative impact that we are currently seeing on Australia’s east coast from our domestic gas prices, through the LNG export projects, now being intrinsically linked to the global LNG market. This has resulted in Australian east coast users paying significantly higher prices for the gas than in the past as can be seen from this chart from ACCC which shows the netback prices (the price at which an exporter should be ambivalent about whether to export their LNG or sell it domestically) have risen from the long-term average of $4-5$/GJ to well above $30/GJ so far in 2022. 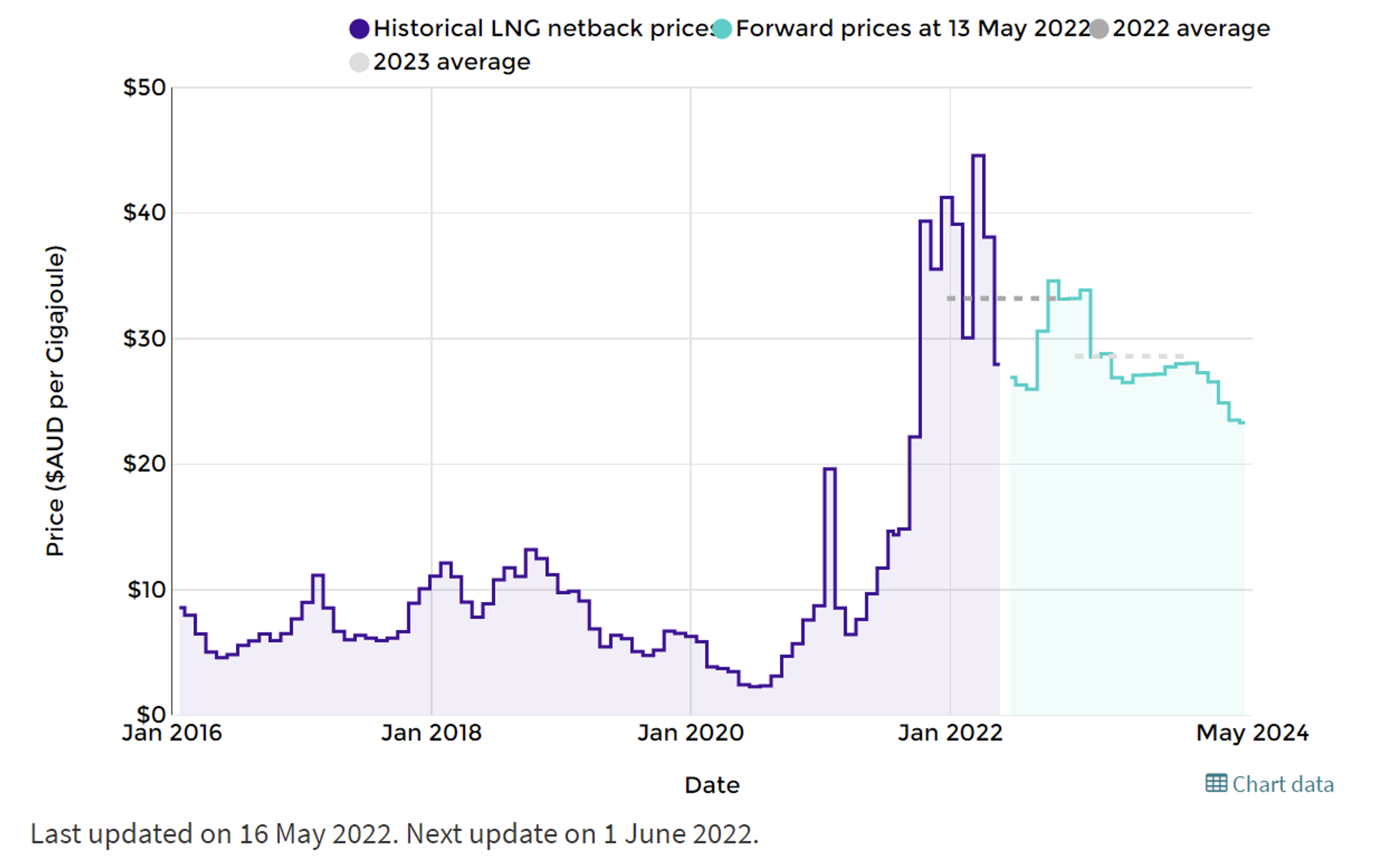 This rise in gas prices has resulted in a number of undesirable consequences:

As a result, I think it is fair to say that the export of LNG is having clear negative impacts on the Australian economy.

So, to sum up, the oil and gas extracting companies in Australia are paying hardly any tax despite surging prices, and the export of LNG is having clear negative side effects on the Australian economy. I think it is time to call on the incoming government to immediately use the main tool available to them and trigger the Australian Domestic Gas Security Mechanism (ADGSM) and force the exporting companies to sell more gas in the domestic market until our domestic gas prices go down to around $7/GJ. After all, as is written on the homepage of the ADGSM:

The Australian Government seeks a gas market that:

You are reading an article about: Companies, Energy / Resources