What is the LNG industry really worth to the WA economy?

What is the LNG industry really worth to the WA economy?

If you think the giant Liquefied Natural Gas industry is a tax and jobs creating engine for the West Australian economy, you might be surprised by some recent research by The Australia Institute.  They have found that, in 2020/21, tax collected was around half the money generated from motor vehicle registrations.  And LNG jobs represented less than 1 per cent of total jobs.

Long time readers know that I am not a fan of the resource tax regime in Australia. Fundamentally, I am of the view that companies involved in extraction of national resources should be treated differently from other companies. This is based on a view that the majority of the value of a country’s national resources should accumulate to the entire population of said country and tax regimes should be constructed that prevent excess rents being generated from extraction of such resources. I fully recognise there has to be an ability to generate a meaningful return on investment to stimulate the development of natural resources as the economic value of a resource that is never extracted is zero for everyone.

The natural gas industry in Western Australia and various WA politicians are very vocal on the benefits that the industry brings in terms of both tax revenues and job creation. It is very interesting to read a recent report from the think-tank The Australia Institute examining exactly how much tax revenue and jobs the industry generates. As the title of the report “Gas-fired robbery” suggests, the conclusion is “not much at all!”

If we first step back a bit and look at what the LNG industry in WA looks like, we can see that there are currently five producing projects of various age and with various owners. 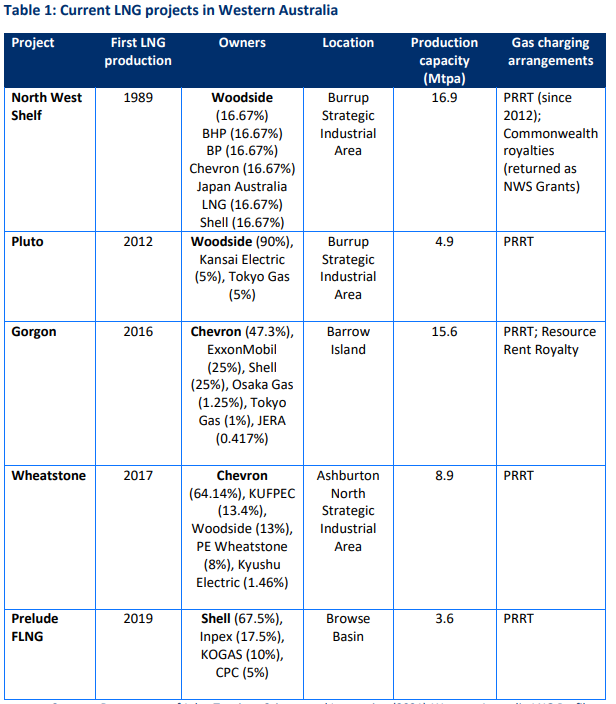 There are three different ways that the WA and the Commonwealth governments can generate revenues from the resource companies: 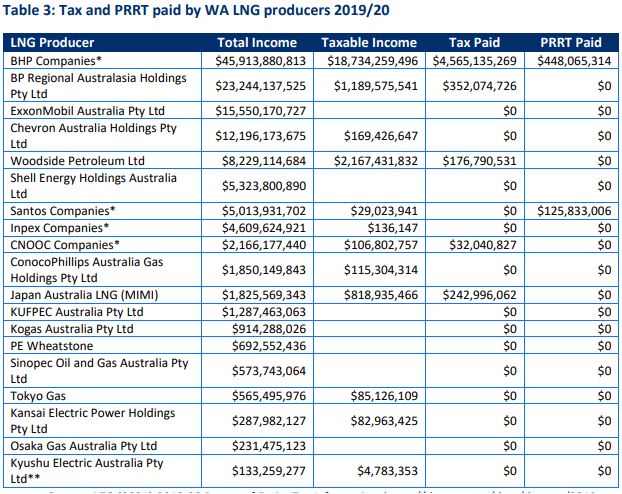 To put this in perspective, the $425m represents 1.06 per cent of the total WA Government’s revenues in 2020/21, hardly as big portion as one would imagine when listening to the industry’s spokespeople. To put it further in perspective, this is half the money generated by WA from motor vehicle registrations.

One can wonder why so little government revenues are generated from the extraction of resources whose value should inherently predominantly belong to the inhabitants of the country they are extracted from. The answer to this is complex but essentially boils down to a badly designed tax system.

I agree with the idea of taxing profits generated rather than royalties based on production volumes but the Petroleum Resource Rent Tax is designed with very generous deductible expenditures including intra-company financing deductibles meaning that companies can structure the financing of their Australian operations in such a way that they are unlikely to ever pay any Petroleum Resource Rent Tax as Shell has indirectly admitted in recent financial accounts as detailed here. A properly designed tax system should capture any supernormal profits generated and not allow leakage outside the country.

As I have mentioned before, Norway is the clear poster child in this regard where generally close to 10 pr cent of the government’s total revenue comes from the petroleum tax regime and where extracting companies are allowed to make a reasonable return on investment but with very high incremental tax rates once they hit certain hurdles.

If we instead look at the other touted benefit of the LNG industry, the number of jobs created, the benefits seem again to be widely overstated by the industry and politicians. On average, 11,000 people were employed in the industry in the year to May 2021, representing less than 1 per cent of the total employed people in WA, again hardly something that seems substantial. 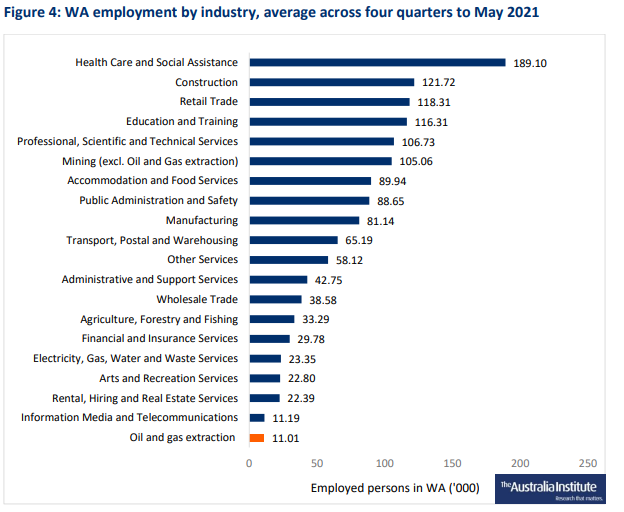 Overall, I think it is fair to say that the importance to the WA economy of the LNG industry that politicians and industry participants try to highlight is significantly overstated! It is also a dismal state of affairs that the people of Australia as a whole are not capturing more of the wealth created by its natural resources. Unfortunately, the political will to change this does not seem to be there.

You are reading an article about: Energy / Resources, Market commentary