With markets falling, is it safe to invest again?

With markets falling, is it safe to invest again?

In the famed 1970s thriller, Marathon Man, Nazi dentist Dr Christian Szell – who is looking for a stash of stolen diamonds – repeatedly asks the character played by Dustin Hoffman “Is it safe?” Right now, many people are likely asking the same question about investing in the share market.

With the distraction of local politics behind us, investors can return to matters that will shape their short and medium-term returns.

Given a lack of clarity about where the safe havens are, and notwithstanding the supply shocks associated with the war in Ukraine and the recent shuttering of China’s economy, what follows is a summary of the issues confronting equity markets and a possible answer to the question of whether it is time to add to your investment in equities.

Widespread and stubborn U.S. inflation, driven by surging oil and rents, as well as rising wages, has inspired inflation expectations for next year to more than six per cent, from near one per cent in 2020.

U.S. core Personal Consumption Expenditure inflation, which excludes more volatile food and energy, has risen from sub-two per cent in the first quarter of 2021 to an annual rate of 4.9 per cent, the highest since September of 1983.

Equity investors are of course aware of this trend and the persistence of supply chain bottlenecks that are in no small part responsible. Perhaps less obvious, but no less concerning, are the rapid reductions being applied by forecasters to U.S. economic growth.

According to Bloomberg, forecast U.S. GDP growth for 2022 was above four per cent back in Q3’21 but has recently plunged towards 2.75 per cent. Meanwhile the 2.5 per cent GDP forecasts for 2023 in place at the beginning of this year have given way to forecasts of 2.1 per cent.

Slowing U.S. GDP growth is important for share prices. Remembering that much of the equity market correction to date has been the consequence of PE compression – which always accompanies rising rates and accelerating inflation – a slowing rate of growth raises the spectre of reduced earnings. And when the ‘E’ in the PE ratio also declines, equity market losses can and often compound.

As waves of liquidation have hit U.S. equities amid a winding back of the Federal Reserve stimulus and rising interest rates, declining total returns for the S&P500 have exceeded the total return losses in treasuries. These returns are highly correlated to 12-month forward S&P500 earnings per share estimates. Consequently, the earnings estimates are now declining, from growth of circa 55 per cent year-on-year, to 27 per cent today.

The winding back of earnings expectations, and the broadening of the bear market, may still have some way to go, even as 50 per cent of NASDAQ Composite constituents – the most vulnerable being thematic and concept stocks, small cap tech and small cap growth, for example – have fallen by more than 50 per cent, and 72 per cent of constituents have fallen by more than 25 per cent (see Table 1.).

Heaping burning coals on the declining earnings outlook will be the decline in real disposable incomes, which are near minus 12 per cent year-on-year and represent the sharpest decline since at least 1960.

The decline is of course partly due to the high support/stimulus payments received last year but much of it can also be attributable to the sharp rise in inflation.

Historically, when real income contractions of this magnitude have occurred, they were followed by a marked slowdown in consumer spending.  We believe, therefore, at the very least, investors should not expect upgrades from, or re-ratings for, companies exposed to consumers just yet.

Is it time to invest?

However, the baby is being thrown out with the proverbial bathwater and high-quality names across a broad variety of sectors and industries are now being sold down too. As we have witnessed many times in the last three or four decades, ultimately, indiscriminate selling gives way to discernment and finally selective buying. A capitulation sell-off may therefore eventually give way to another once-in-a-decade opportunity to improve the general quality of portfolios and lock in superior returns. Remember, the lower the price one pays, the higher the return.

What are the factors investors should be watching to decide if it is safe to dip one’s toe back in the water?

The current sell-off has been largely macro-driven. Concerns about inflation and rising interest rates, and now slowing growth (stagflation), are principally responsible for the current reassessment of equity investor returns. These seem likely to remain this year. It seems reasonable to conclude the expectation of good news on these fronts will be necessary for the current ‘risk-off’ sentiment to ease before reversing.

The question of course, is where are the revelations going to be?  Will slowing growth lead to recession, which restores bonds as a safe haven, reducing their yield and setting equities up for a recovery post-recession?  Or will we see high inflation and strong economic growth, empowering only companies with pricing power to improve margins through a combination of higher volumes and higher prices?  Finally, do we end up with Jerome Powell’s ‘soft-landing’ scenario, which will be positive for both equities and bonds?

In the short run, the market seems very oversold making it susceptible to a sharp short-term recovery (Figure 1.) 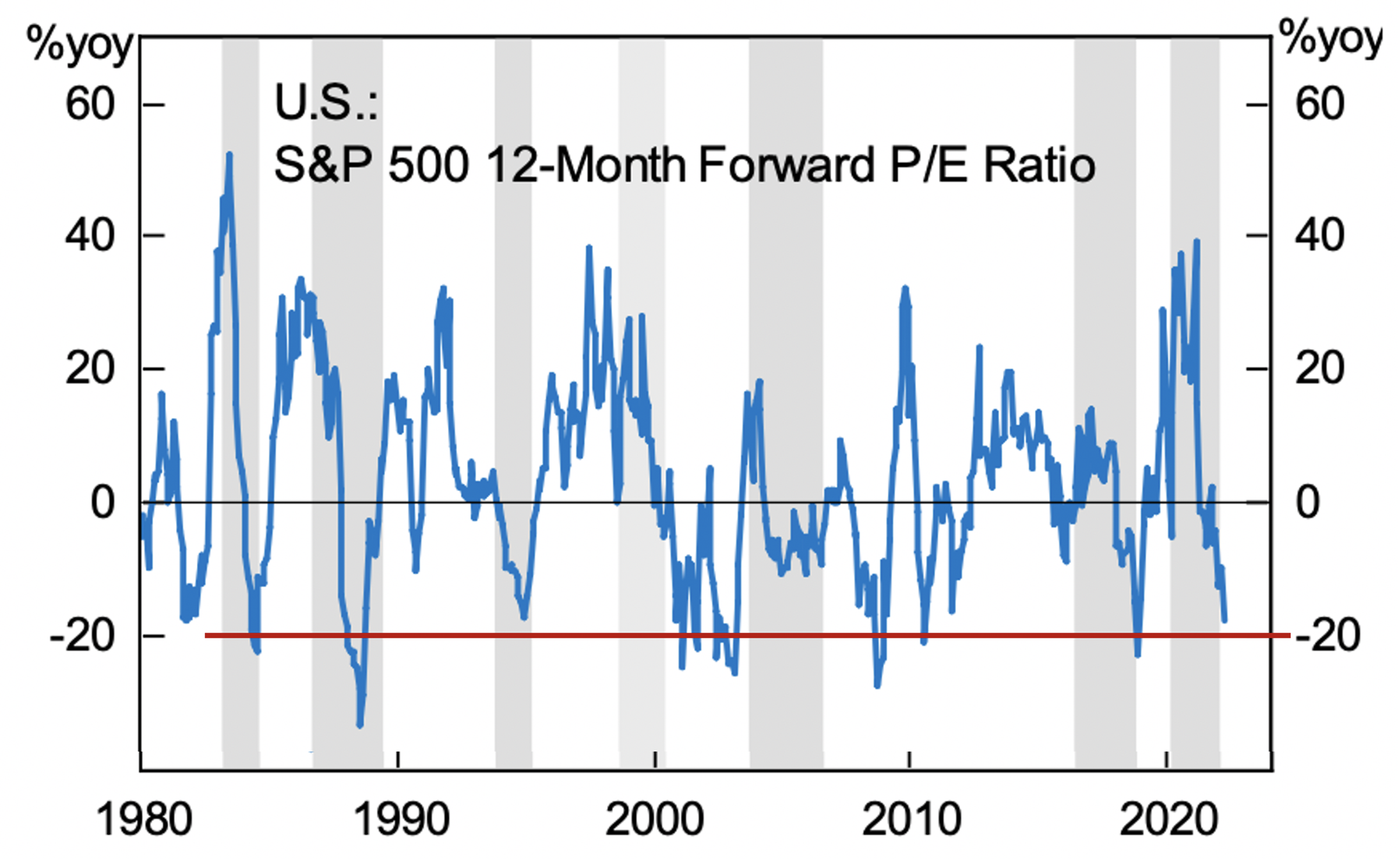 As can be seen in Figure 1., the pace of PE compression is historically significant and is nearing a point (red line) from which PEs have historically expanded again.

The PE compression reflects rising interest rate expectations but importantly, however, it does not appear the market has factored in any recession or even any slow-down in earnings. The slow-down in earnings growth estimates however still suggests investors are factoring in some growth.

And investors should not ignore the tax-like impact on consumers and growth from the combination of rising interest rates, rising fuel costs and the rising U.S. dollar (which of course saps capital from and fuels inflation for importing nations). The market has not factored in a contraction in earnings (keep also in mind the very steep slump in real disposable income cited above) and for this reason many commentators believe further declines in the stock market should be expected.

And unlike previous bear market episodes, the Federal Reserve does not appear to be coming to the rescue of investors. Indeed, if anything, the Fed’s Jerome Powell has toughened his Hawkish stance. Meanwhile, as liquidity is being withdrawn, money supply growth continues to slow relative to bank credit growth, meaning there is less liquidity for financial assets.

Finally, while some commentators and macro economists point to evidence, and warn, of more frequent bear markets (US S&P500 drawdowns of 20 per cent or greater) during periods of rising inflation (Figure 2.), I note my firm belief long-term declines in union membership and rapid advancement in autonomous technology will keep a lid on long-term wages growth and ultimately on inflation. 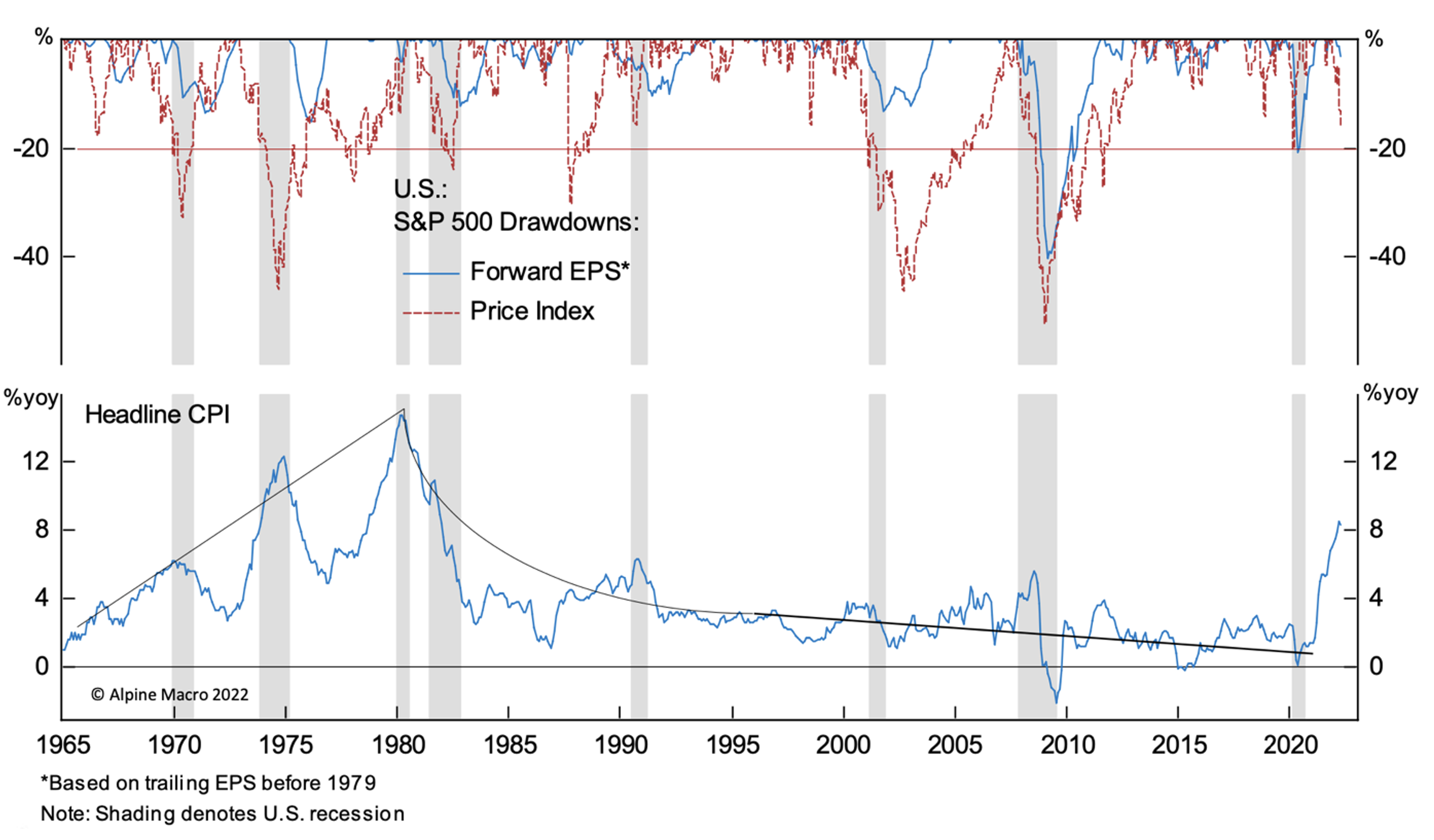 Investors should be sharpening their pencils and working on the stocks and funds in which they plan to invest, in preparation for making additional equity market investments.