Right now, inflation is the new bogey man. And it’s having an impact on equity markets. But is rising inflation just a blip caused by short-term bottlenecks in the supply of labour, or a long-term structural issue? If it’s just a blip – which I think it is – then any weakness in the share prices of high quality companies will provide us with a classic contrarian opportunity.

Last week, US inflation surprised on the upside. US CPI inflation in April printed at 4.2 per cent, with core CPI at three per cent.  According to inflation historians, the reading was the highest in over 25 years. The alarmists noted it was the highest in “a quarter of a century!” The equity market vomited briefly.

Since then, inflation alarms are being rung at significantly increased volumes.

At the end of April, US Federal Reserve Chairman Jerome Powell told investors to expect inflation to spike but for that spike to be transitory. “In the United States, fiscal and monetary policy continue to provide strong support. Vaccinations are now widespread, and the economy is beginning to move ahead with real momentum. During this time of reopening, we are likely to see some upward pressure on prices…But those pressures are likely to be temporary as they are associated with the reopening process. An episode of one-time price increases, as the economy reopens, is not the same thing as, and is not likely to lead to persistently higher year-over-year inflation into the future – inflation at levels that are not consistent with our goal of 2 percent inflation over time.”

The US Federal Reserve believes, in essence, there are two reasons to expect the spike in inflation to be transitory.

The first and obvious one is the base effect. The typical 12-month measure of inflation will move well above the US Fed’s two per cent target over the next few months simply because the very low inflation readings from March and April 2020 drop off the comparison calculations.

The second observation made by Jerome Powell is that his channel checks (he points out he has better contacts than anyone else in both the business and the not-for-profit sectors) confirm rising commodity prices are the result of supply chain bottlenecks. These too are expected to self-correct, albeit they may take a little longer to resolve than the aforementioned base effects. 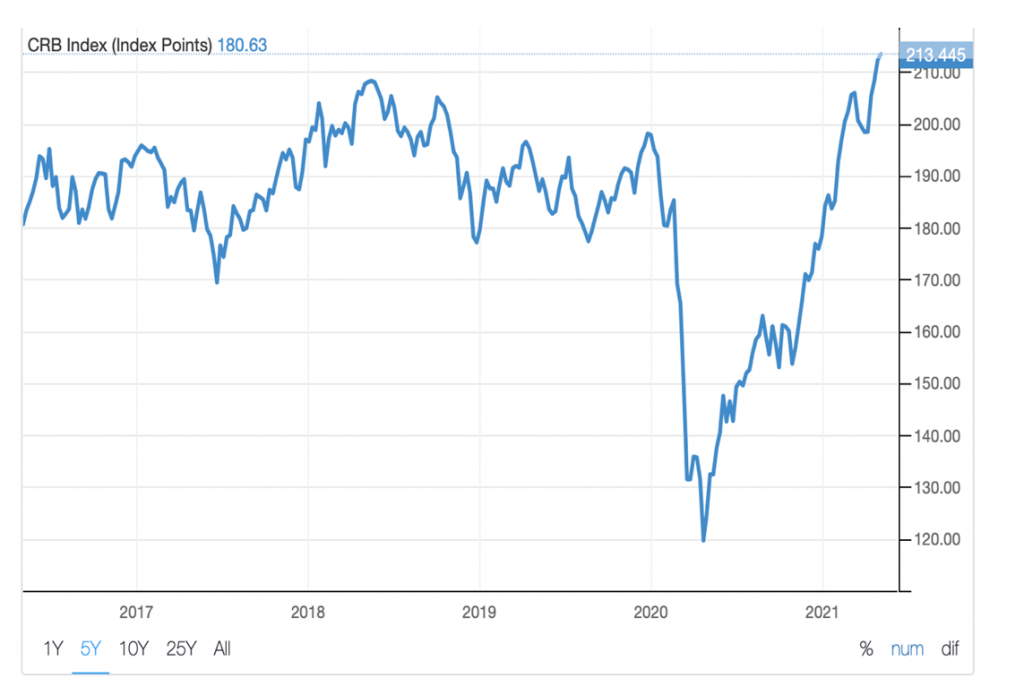 Pointing, by way of example, to higher steel costs impacting Berkshire’s housing and furniture businesses, Buffett observed, “People have money in their pocket, and they pay higher prices… it’s almost a buying frenzy.” He described the economy as “red hot.”

All this talk of inflation and its implied impact on bond rates and the yield curve is dampening enthusiasm for stocks at the profitless or very pointy end of the growth spectrum. And that’s putting it mildly.

Afterpay has fallen 47 per cent since its 2021 peak. The once lauded WAAX stocks have also fallen out of favour, with Wisetech 23 per cent, Appen 56 per cent, Altium 31 per cent and Xero 23 per cent lower than either their January 1 level or calendar 2021 highs.

Elsewhere, Kogan has fallen 53 per cent, Laybuy Group 50 per cent, Youfoodz 61 per cent, Temple & Webster 23 per cent and Mydeal 56 per cent.

In anyone’s language these stocks have seen a crash.

One of the biggest concerns inflation observers point out is that of this week’s inflation print only 1.2 per cent of the 4.2 per cent increase in prices (less than a third) was due to base effects. Underlying CPI, they note is already at three per cent, which is significantly higher than the 10-year trend of just under two per cent.

Importantly, however, the accelerating increase is due to supply shortages and bottlenecks, which of course Fed Chair Jerome Powell has already noted are expected to resolve.

One observation that is worth watching closely is the extent to which excess deposits and savings translate to spending. Additionally, we should keep an eye on the extent to which rising prices inspire faster spending – a self-fulfilling chase to beat high prices that causes higher prices.

The final concern is wages. Persistently higher inflation rates require rising wages. The extent to which wage growth accelerates and is exacerbated by generous unemployment welfare supplements in the US are additional factors keen investors should be aware of.

US bond rates to hit four per cent?

Another bear is former New York Fed President Bill Dudley. He writes in the Washington Post this week that Treasury Secretary Janet Yellen was right when she recently made the innocuous observation that the Federal Reserve might at some point have to increase interest rates, adding “I would go even further: Not only will the Fed have to raise rates, but rates are likely to go much higher than investors anticipate.”

Justifying a possibility of US ten-year bond rates, Dudley writes: “Judging from Fed officials’ latest economic projections, they think the rate consistent with 2 per cent long-run inflation would be somewhere between 2 per cent and 3 per cent, with a median of 2.5 per cent. This seems reasonable: It suggests an inflation-adjusted neutral rate of 0.5 per cent, which is well below the long-term historical average of about 2 per cent. And if history is any guide, the Fed will have to take rates considerably higher than neutral before its tightening cycle is done.

“Second, the Fed’s new long-term policy framework implies even higher peak rates. The central bank has made it abundantly clear that it won’t start raising rates until inflation is expected to exceed its 2 per cent target for some time – which, in my view, means it will probably have pushed the economy past maximum employment, and then will need to make monetary policy tight to cool the economy down.”

Importantly, in a June 2020 column for the Washington Post, Bill Dudley, writing about the Federal Reserve’s 250-to-1 leverage ratio, alluded to whether we should be concerned about higher interest rates. “So how worried should we be about this? In my view, the answer is: Not very. That is because the benefits of a strong economic recovery that necessitated higher short-term interest rates would be much more valuable to the nation…”

Are our memories that short?

Prior to COVID, one narrative occupying our imaginations was the rise of automation. The ‘Jobs for machines, life for people’ narrative had become so concerning to some it inspired talk of a Universal Basic Wage (UBI).

And remember AlphaGo? AI Robot Go player AlphaGo beat Lee Se-dol, the world’s highest- ever ranked Go player, in all but one of their five matches, a clear signal that machine deep learning had gone from linear to parabolic.

That Go tournament took place in 2017. Now take a look at Figure 3., which reveals spending on IT and software. 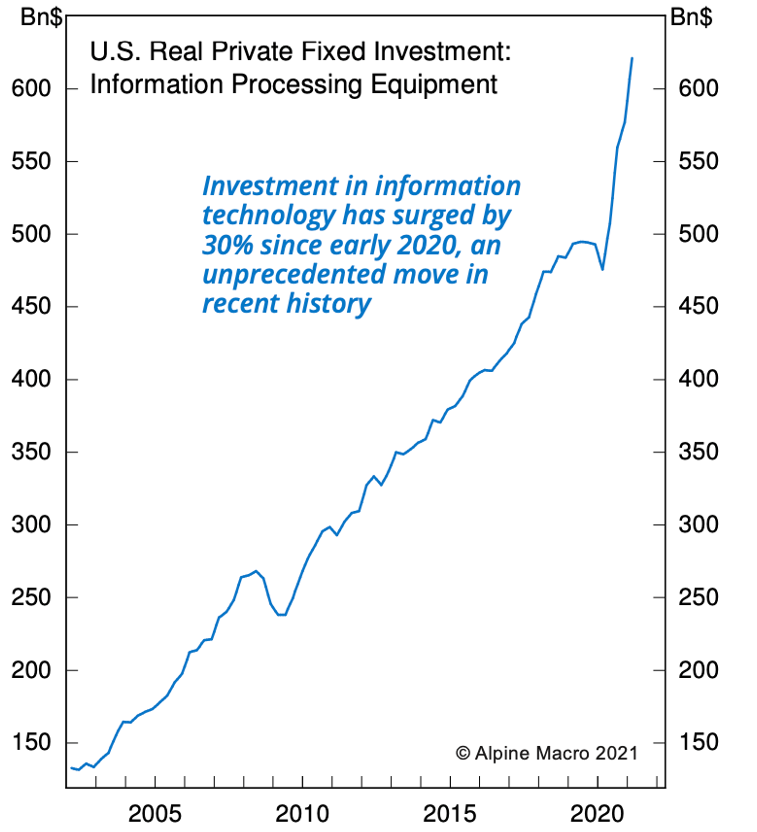 In the last two years alone, ultra-low interest rates have spurred a near vertical acceleration in IT spending.

In other words, investment in machines that displace labour has increased. This narrative has been forgotten but the impact on labour is more significant than ever. It hasn’t gone away during COVID.  When COVID is long forgotten we will return to debating a response to job losses from the rise of machines, AI and robots.  And while the impact on wages and jobs will be negative, in the absence of any legislative or regulatory response the marginal cost for business will decline and profits will rise.

The best environment for investing in equities is when the economy is growing and disinflation (declining rates of inflation) exists. Indeed according to macro research house Gavekal, virtually all of the gains in the S&P500 since 1880 have occurred during periods of disinflation.

For now, inflation is the new bogey man, the new shadow the market is jumping at. And while alarmists will appear as inflation predictably jumps, it is important for investors to remember the long-term narrative. Inflation will bounce around in the short and even medium term but structurally it appears to be heading interminably down.

Lower inflation appears to be a structural reality. Short term bottlenecks in the supply of labour due in part to a lack of migration will eventually abate and inflation base effects will appear again but as disinflation (declining rates of inflation). Historically, economic growth combined with disinflation is an ideal time to be in equities. Current and intermittent weakness in the share prices of high quality companies with bright long-term growth prospects should be seen as a classic contrarian opportunity.