Why I still prefer equities to bonds

Why I still prefer equities to bonds

When markets are volatile – as they are right now – we start hearing more and more from commentators talking up the benefits of holding bonds in a portfolio. After all, bonds are regarded as safer and more stable than equities. But if you look at long-term returns, another picture emerges.

The inverse relationship between price and yield isn’t the sole preserve of Government bonds. All assets are worth less when interest rates rise, and their prices, therefore, move in the opposite direction to interest rates. An asset is only worth the present value of all its future cash flows. Think of it this way, when rates are higher, you can invest less today to earn a prescribed amount at a future date. That lower amount you can invest today is the present value of the future amount. So, when rates are higher, assets are fundamentally worth less.

As well as their instructional value, Government bonds also give investors a valuation signal or guidepost for all assets.

Is the market today fair value?

When determining a fair Price-to-Earnings (P/E) ratio for the equity market, for example, we start by requiring the yield on a low-risk treasury bond.  If we use today’s Australian Government ten-year bond, the rate is 3.96 per cent.

The next step adds a risk premium to cover the additional risk associated with investing in equities. According to various calculators[1] and providers implied market risk premiums vary and for the purpose of this exercise we’ll use 3.43 per cent.

Add the two together and we arrive at 7.39 per cent. In theory, this is the ‘equilibrium’ earnings yield the Australian market should be generating for an investor to be indifferent between investing in Australian equities and bonds. Think of it as an estimated fair value.

The P/E ratio is the inverse of the earnings yield, so by dividing 7.39 per cent into one (1), we can determine the equilibrium P/E ratio for the ASX200, which is 13.5 times earnings.

For equity investors, the value of the signalling function of bond yields is hard to underestimate. And for longer term investors, it is also helpful to have an appreciation of what the term structure of interest rates might be. What regime are we entering?

Figure 1, supplied by macroeconomic research house CrossBorder Capital in the UK, reveals a model based on a regression of the U.S. stock market P/E multiple against a time-series of bond yields. The three major marks point to the average 10-year yield from the term structure in each period. For example, the 10-year Treasury Bond Yield averaged approximately five per cent for the post-WWII average yield curve. Depending on the equity market risk premium adopted, this is equivalent to an equilibrium P/E multiple of between 10 and 15 times earnings. According to CrossBorder Capital, however, they observe an equivalent P/E ratio of 15-20 times. According to them, the more recent post-GFC (2008/09) yield curve produces an average yield of nearer two per cent and an equivalent P/E multiple of between 25-30 times.

Reverting to a 1976-82 yield structure – the period during which stubborn U.S. inflation was being tackled by aggressive monetary tightening under Fed Chair Volcker’s “keeping at it” directive – produces a Treasury yield of 10 per cent and a P/E of 10 times. I note CrossBorder’s number might be lower were they to include the equity risk premium. 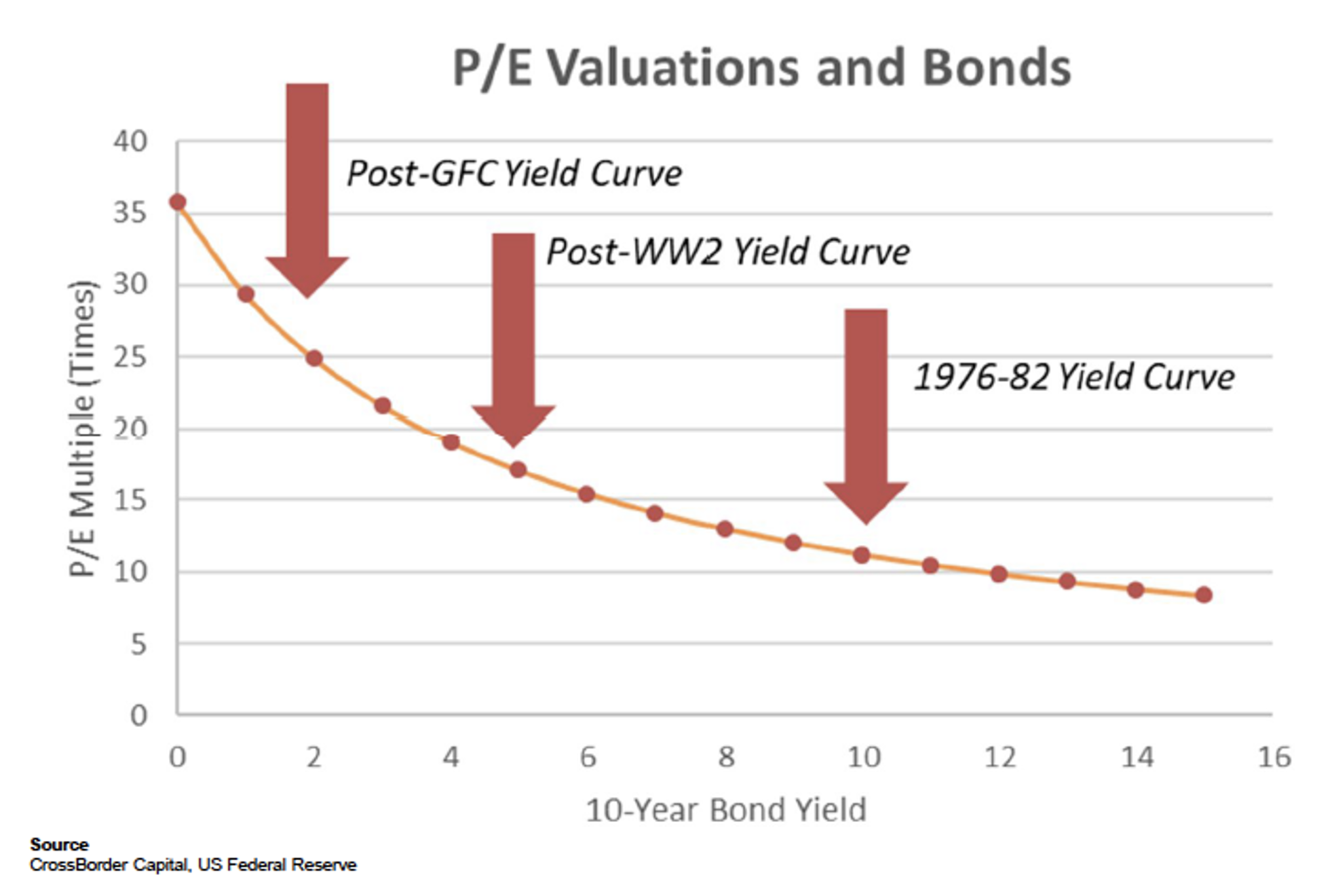 A good gauge of future P/E ratios for the aggregate indices could be determined if the future yield curve could be predicted.

Perhaps the past offers some insight. CrossBorder research provides four choices from their assessment of prior experience.

Their first observation is the U.S. financial sector is now far larger in relative terms, more integrated with the U.S. real economy, and less resilient to the extremes of monetary tightening such as was experienced in the late-1970s. Therefore, that period’s term structure is seen as an anomaly (see Figure 2) and unlikely to be repeated.

Similarly, and despite sound reasoning to justify expecting a similar term structure to the mean of the post-war years (the dashed line in Figure 2.), globalisation (witness the UN discussing debt forgiveness for poorer nations collapsing under a mountain of debt denominated in U.S. dollars), today’s economic climate, large debts and ageing Western populations, suggest such a term structure could not be supported or survived! 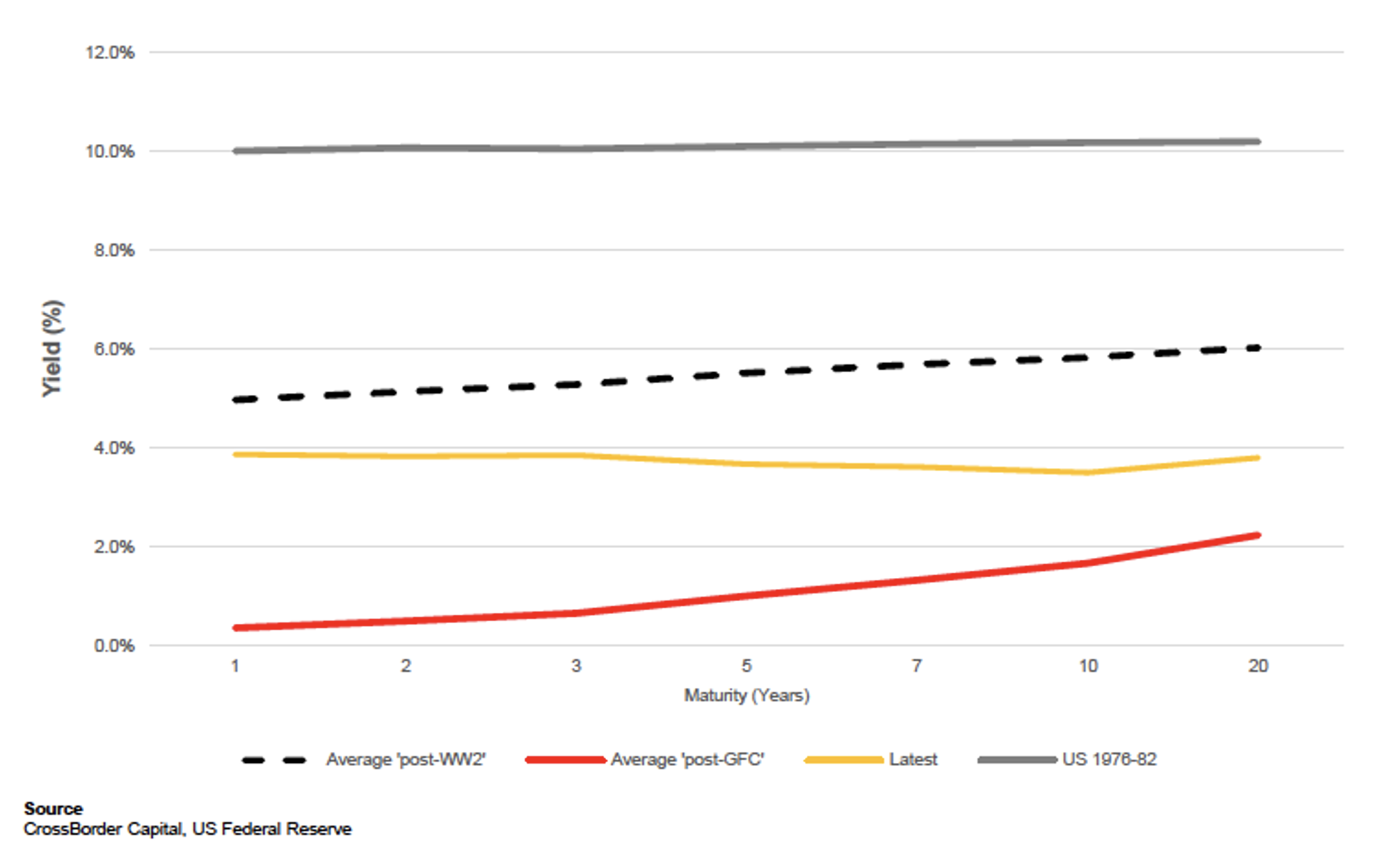 In such an environment, bonds may be “safe and stable” but ultimately lower-returning compared to equities, which generate a dividend yield, earnings growth, and potentially P/E expansion from current levels.

[1] We’ve used http://www.market-risk-premia.com/au.html for this example.

You are reading an article about: Investing Education, Market commentary