Is it time to tilt to high quality tech names?

Is it time to tilt to high quality tech names?

Over the past year or so, we’ve seen spikes in the valuations of fast growth, momentum stocks. But if inflation rears its head, that could change in a heartbeat. Which is why the next big rotation could see these over-valued – often profitless – firms dumped in favour of long-duration quality tech businesses.

Investing in global stocks has been particularly rewarding during 2020 and the early part of 2021. The future however could be more challenging and more discernment will be required. This discernment will be no more necessary than required in the tech sector.

During the pandemic a wide range of technology stocks massively outperformed the broader benchmarks as well as their non-digital peers. Highly profitable megacaps such as Facebook, Apple, Amazon, Microsoft and Google, outperformed extraordinarily, reflecting their incredible economics and their scarcity. Work From Home (WFH) enabling technology companies also outperformed even though many of these companies were reporting explosive topline growth but little or no profitability.

The prospect of inflation however fundamentally alters the landscape.

Recently, a well-connected friend told me Australia’s Central Bank believes there’s a 25 per cent chance inflation could get away from them. The idea that Central Banks could be ‘behind-the-curve’ is one markets are most nervous about.

I currently believe the very long term involves structurally lower rates of inflation, primarily due to a lack of wage growth. You see, massive investment in automation, robots and AI – investment that has accelerated during COVID – displaces labour, removing a significant driver of wage inflation. Without wage inflation, consumer price inflation is harder to come by. Meanwhile, the proportion of unionised workers is significantly lower than it once was, meaning collective bargaining of wages is tougher. Consequently, the annual wages increases typical of the past appear to be a thing of the past. And for every unit of productivity we use far less oil than we once did, meaning oil’s influence on the cost of living has fallen significantly.

Added to that list is that our population is ageing. As we age we consume less. Consequently, growth is slower, and pressure on consumer prices lower.

The short-term could deliver some volatility

But that’s the long-term picture for inflation. Economic growth with disinflation is very good for growth companies and innovative companies with pricing power. The shorter-term picture however could be very different and it could deliver some volatility. Being prepared to take advantage of any ensuing volatility requires a quality portfolio that can withstand that volatility, reduce downside risk, while being invested in sufficiently liquid issues.

Rising vaccination rates and a reopening from lockdowns has meant less time at home and therefore an economic return to ‘normal.’ Investors should be a little cautious, especially about remaining invested in companies that might still be growing revenue but at much slower rates after their customers return to the office.

Meanwhile accelerating economic growth also raises the spectre of inflation. While central bankers are reassuringly jawboning a dovish view of inflation, there is probably a 25 per cent risk that they are behind the curve with respect to raising rates.

Inflation’s re-emergence, no matter how small the probability, concerns markets because of its effect on intrinsic values and market prices. History shows that the higher the inflation rate, the lower the earnings multiple investors are willing to pay for stocks.

For 37 years bond interest rates have been declining and in recent years they have fallen precipitously. The greatest beneficiaries of declining bond interest rates were businesses with earnings way out on the horizon, those companies that are profitless today but are forecast to earn a lot in the future. I call them the “Profitless Prosperity” stocks. These companies see the greatest positive impact on their theoretical values from declining bond rates.

Of course, the reverse is also true. When rates start to rise, intrinsic values start to fall. As Table 1., demonstrates the rise in bond rates from 0.5 per cent to 1.4 per cent, if applied as a discount rate, results in a decline of 23.5 per cent of the present value of a dollar earned in 30 years.

Table 1. Impact of rise in US bond rates on Present value (PV) of future earnings

And of course, Table 1, shows what happens when bond rates rise to 1.40 per cent. They have recently traded as high as 1.70 per cent and some central bankers suggest 2, 3 or even 4 per cent bond rates are possible! 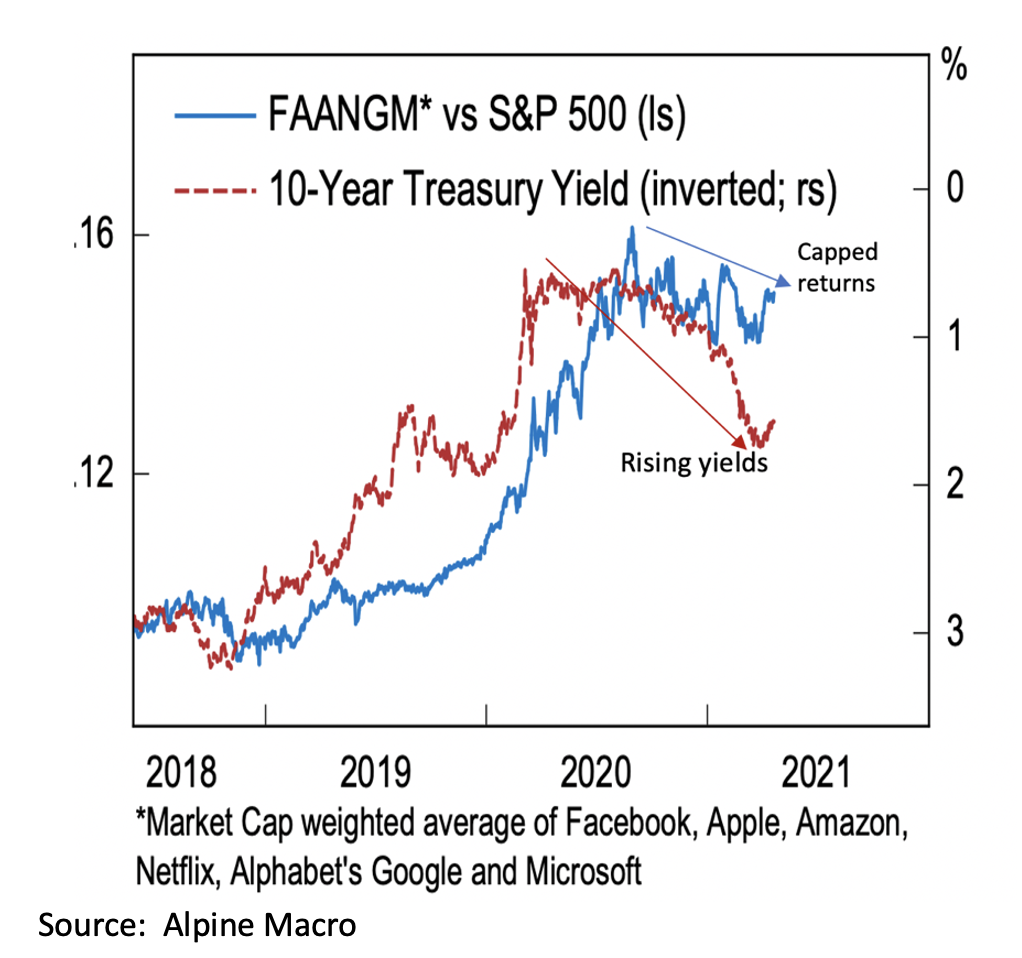 For the next few months there is every risk that both the leading tech companies and the profitless prosperity companies are put under some pressure.

The vulnerability of long-duration tech stocks

There are a number of reasons for this and inflation fears are but one. In addition to the vulnerability of long-duration tech growth stocks to rising long-term rates, all these US companies will be reporting their second quarter year-on-year comparisons soon. And while these may still surprise to the upside (as they did for longer than expected in Australia), markets may look through the current strength to the tougher quarter-on-quarter comparisons instead.

We believe investors will become more selective, as they have done in the past after previous shakeouts. The consequence is that any forthcoming volatility may be greater for the super long-duration tech set where price and sales multiples are off the Richter scale.  Examples include Roku, Peloton, Slack, Docusign and Zoom, which trade between 10 times sales (for Peleton) to 35 times sales (for Zoom). EV to EBITDA sits at about 2500 times for Roku and 147 times Zoom. Meanwhile Roku, Docusign and Slack generate negative Returns on Equity.

Contrast these multiples to the tech giants whose combination of growth and profitability could not have been imagined by capitalism even a decade ago. Facebook’s ROE sits at 25 per cent, Apple’s is 82 per cent and Microsoft 43 per cent.

Table 2. illustrates the relatively low multiples for superior tech companies – in terms of returns to equity holders – versus the expectations built in to higher momentum peers.

Of course, the leadership is already changing. Funds have been flowing out of the longest duration, momentum winning tech names even though revenue growth is merely slowing.  Witness for example the up-to-50 per cent slides in Peloton and Afterpay, a decline of a third for Docusign and Zoom, along with slides in Appen (-70 per cent), Wisetech and Xero.  And that’s to say nothing of the selloff in cryptocurrencies, SPACs, tech stocks, and ARK ETFs.

We currently believe any surge in inflation could see the fast growth, momentum stocks hit harder than established, more profitable and much larger tech peers. As such we currently believe it is wise to tilt towards quality and away from momentum in the tech names. Of course, at Montgomery and at Polen Capital, a ‘quality’ philosophy is entrenched in our investment and portfolio construction processes.

The Polen Capital Global Growth Fund owns shares in Amazon, Alphabet, Facebook and Microsoft. This article was prepared 01 June 2021 with the information we have today, and our view may change. It does not constitute formal advice or professional investment advice. If you wish to trade these companies you should seek financial advice.

You are reading an article about: Companies, Global markets, Stocks We Like