How to profit from the boom in batteries

How to profit from the boom in batteries

According to Roskill Information Services, demand for lithium-ion batteries will increase more than ten-fold over the decade to 2029. This will inevitably lift demand – and prices – for the minerals required to make the batteries. And this should put some Australian miners in the box seat to profit from the next energy revolution.

VW’s announcement of a €25 million capital expenditure program to develop a comprehensive range of EVs – from affordable to luxury and performance, a network of tens of thousands of fast-charging stations across the world, as well as more ‘gigafactories’ and battery recycling plants – is a convincing case in point.

Demand for batteries however will come not only from the global pivot by car manufacturers to BEVs. Large power utility projects are increasingly adopting battery technologies as are residential power consumers. EV purchases have skyrocketed from just over 500,000 in 2015 to over two million vehicles in 2018 and three million in 2020.

The 2015 United Nations Climate Change Conference in Paris set the framework for a rapid global shift to a sustainable energy system in order to avoid the risk of catastrophic climate change. The challenge for governments has shifted, from discussing what might be achieved to determining how to meet collective goals for a sustainable energy system.

According to the International Renewable Energy Agency report, Electricity Storage and Renewables, Costs and Markets to 2030, published in 2017, “Electricity storage will play a crucial role in enabling the next phase of the energy transition. Along with boosting solar and wind power generation, it will allow sharp decarbonisation in key segments of the energy market.”

The report also notes: “As variable renewables grow to substantial levels, electricity systems will require greater flexibility. At very high shares of VRE, electricity will need to be stored over days, weeks or months. By providing these essential services, electricity storage can drive serious electricity decarbonisation and help transform the whole energy sector.”

In 2018, Europe was reported by Wood Mackenzie to have the second highest level of energy storage in the world with 600 megawatts of battery power, noting: “An impressive [range] of large utility projects has been commissioned in 2018, including a number of approximately 50-megawatt behemoths”. And Wood Mackenzie expects continued strong growth in installations.

Europe’s leading position stems from its clearly articulated decarbonisation strategy. The EU aims to be climate-neutral and a net-zero greenhouse gas emissions economy by 2050. The objective is the centrepiece of the European Green Deal and is in line with the EU’s commitment to global climate action under the Paris Agreement.

Meanwhile, a virtuous circle of declining battery prices, leading to increasing demand and, in turn, leading into increasing investment in battery technology, is well entrenched. In 2010, a 1KWh capacity lithium-ion battery pack cost more than $1,000. Two years ago, prices were $156, according to Bloomberg New Energy Finance.

Cheap batteries will of course lower the cost of manufacturing cars as well as commercial and residential storage solutions, accelerating their adoption.

As an aside, recycling could also help to reduce costs. In 2017, lithium battery recycling projects were in operation or under development in Belgium, Canada, China, Germany, Japan, and the United States. In Australia just two per cent of the annual 3,300 tonnes of lithium-ion battery waste is currently recycled, with the remainder shipped overseas. The CSIRO claims Australia could lead the world in the re-use and recycling of lithium-ion batteries. The CSIRO also suggests the formation of a recycling industry might not only address waste issues but stabilise global lithium supplies to meet consumer demand. It is claimed, if recycled, 95 per cent of waste components could be turned into new batteries or employed elsewhere.

According to Roskill Information Services, in 2017, the global markets for lithium products were estimated to be batteries, 48 per cent; ceramics and glass, 26 per cent; lubricating greases, 7 per cent; polymer production, 5 per cent; continuous casting mold flux powders, 4 per cent; air treatment, 2 per cent; and other uses, 8 per cent (other uses may have included agrochemicals, airbag ignition, aluminum alloys, carbon dioxide absorption, cement and concrete additives, dyes and pigments, industrial catalysts, organic synthesis, pharmaceuticals, and scintillation).

According to Roskill’s June 2020 forecast, Li-ion battery demand will increase more than ten-fold by 2029, reaching in excess of 1,800GWh capacity. The pipeline capacity of battery gigafactories is reported by Roskill to exceed 2,000GWh in 2029, at more than 145 facilities globally.

Today, it is reported 180 gigafactories either exist or are under construction, and a calculation of demand planned by major battery and automotive entities suggests capacity of 3000GWh by 2030.

These estimates compare to the 455GWh of Li-ion battery production capacity in 2020 as reported by S&P Global Market Intelligence.

Current estimates therefore are for a near seven-fold increase in the next nine-and-a-half years.

Demand for the upstream ingredients must surge. 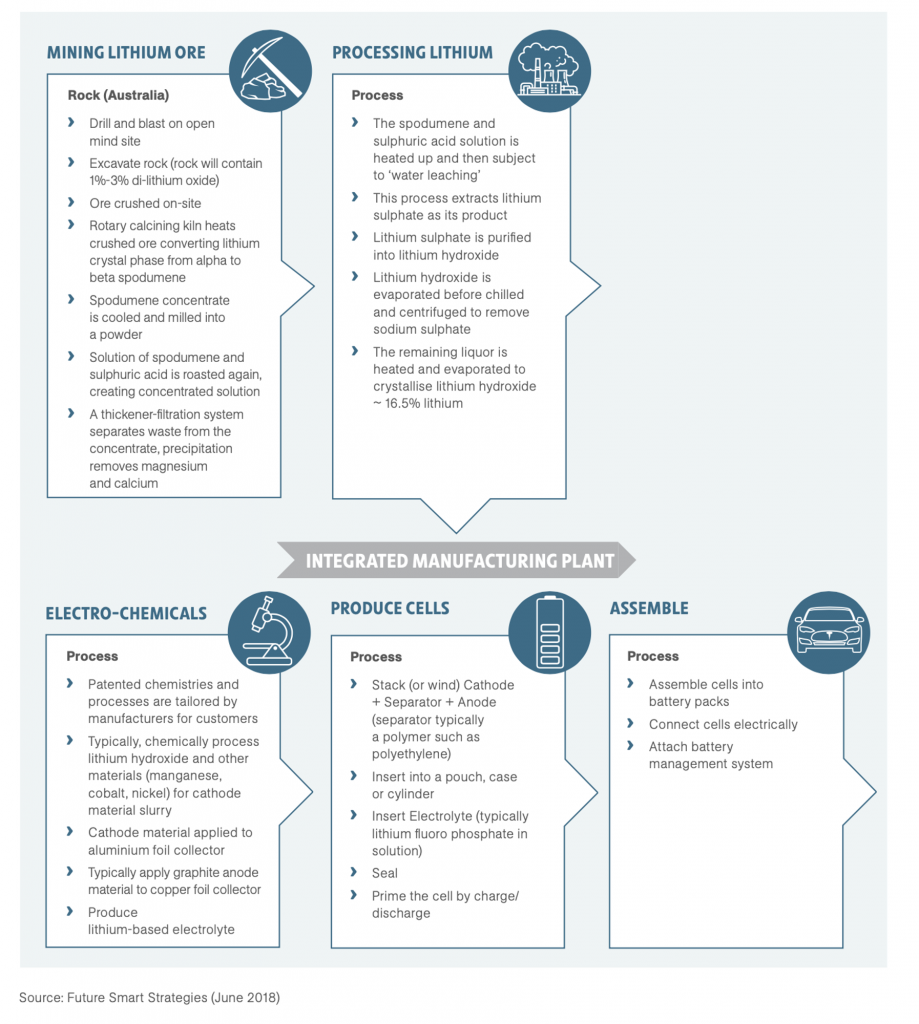 According to the Australian Government’s 2018 report The Lithium-Ion Battery Value Chain, “Australia is developing its lithium extraction capacity faster than any other country. Forecast output from existing Australian operations and planned projects tracked by the Western Australian Department of Mines indicates a potential supply of more than 1mt LCE by the early 2020s.”  Importantly, this projection indicates underlying industry demand for lithium at a higher rate than then forecast by many industry analysts. For example, McKinsey & Company forecast only 669,000 tonnes of global LCE demand in 2025.

With the world’s third-largest reserves of lithium (behind Chile and China) and being the largest producer of hard-rock or mineral lithium spodumene (Chile’s is sourced from brine deposits, not hard rock spodumene), Australia has a comparative advantage in its access to the minerals vital for making lithium-ion batteries. Australia’s lithium reserves are estimated to amount to over 18 per cent of the world’s resource and we also produce nine of the 10 elements[1] required for lithium-ion battery anodes and cathodes. The tenth element for production is graphite of which Australia also has commercial reserves.

Lepidico notes “between 2010 and 2017 the compound annual growth rate (CAGR) for lithium chemical demand was 11.7 per cent. However, the CAGR for electric vehicle batteries was a massive 60.2 per cent over the same period, albeit from a relatively low base. Many lithium chemical commentators and producers predict that lithium chemical demand will continue to grow at between 16 per cent and 18 per cent annually from 2017 to 2030, with Lithium-ion batteries accounting for the majority of this growth. This being the case, by 2025 lithium demand would be between 630,000 tonnes and 860,000 tonnes of lithium carbonate equivalent (LCE) and by 2030 demand would rise to between 1.4 million tonnes and 1.9 million tonnes of LCE per year.

Small cap company Orocobre is a lithium carbonate supplier and, in partnership with Toyota Tsusho Corporation (TTC), has built and begun operating the first commercial, brine-based lithium production facility in two decades. In 2018 Orocobre announced the Stage 2 Expansion of its flagship Olaroz Lithium Facility in Argentina taking anticipated production and capacity to 42,500 tpa of lithium carbonate by 2025 (note their relationship with Toyota/Japan will also allow their material to produce Lithium Hydroxide, a material permitting chemically more stable cathodes, which is necessary for higher energy density batteries offering greater range).

Investors can quickly gain an understanding of the pressure on lithium supply and therefore prices from the accelerating transition from ICEs to BEVs. And of course, this does not account for the possibility restrictions are implemented on the export of the raw ingredients for Li battery production. The pace of EV adoption however will be limited by battery production and in turn battery production is dependent on the supply of the raw materials. There is a point at which the price of raw materials becomes too punitive to make batteries using current technology. While vehicle prices might rise to preserve car manufacturer margins, alternative technologies are incentivised and explored. The point is EVs may take investors on an ascent but the ride will inevitably be met with bumps along the way.

The Montgomery Small Companies Fund owns shares in Orocobre. This article was prepared 08 April 2021 with the information we have today, and our view may change. It does not constitute formal advice or professional investment advice. If you wish to trade Orocobre you should seek financial advice.