How soon till we see the collapse of profitless prosperity?

How soon till we see the collapse of profitless prosperity?

Is it just me?  Or have investors in loss-making US technology companies, like Uber, gone completely insane?  As a value investor, I see no good reason to fork out good money for businesses that have never made a profit, and possibly never will.

I just reread my articles about the space-letting company WeWork. In 2018, WeWork lost its owners US$1.7 billion. Billion! Then I looked at my notes on Uber. Uber recorded a US$3 billion operating loss in 2018.

In normal circumstances, if a company announced that kind of loss, with no immediate prospect of stemming it, its shares would plummet.

But today, the two companies still have an estimated market capitalisation of US$80 billion to US$90 billion.  That’s roughly the same market capitalisation as the Commonwealth Bank which generated US$6.7 billion in profits in 2018 or Volkswagen (US$14 billion in profits), Morgan Stanley (US$8.5 billion), Christian Dior (US$3 billion), Lockheed Martin ($US5 billion) or Caterpillar (US$6.1 billion).

Sure, these companies might not be growing their revenues as quickly, but they are making profits today and likely will be in years to come. As Uber and WeWork grow revenues, however, so do the losses required to generate those revenues also grow.

I get that as interest rates fall the mathematics of present valuing future cash flows generates a sharper boost to the value of more distant dollars earned. But in order for that valuation to have merit, the future dollars must actually be produced. There appears to be no consideration of the risk that profits don’t ever arrive. I don’t think Uber or Tesla, for example, will exist in their present form, in a decade’s time.

An astonishing 30 per cent of bonds in the world’s most watched global bond index now have a negative yield. According to Deutsche Bank, that’s more than US$15 trillion and it’s tripled since October 2018!

Amid global economic uncertainty, so desperate have investors become for a safe haven that they are willing to pay governments to borrow from them. 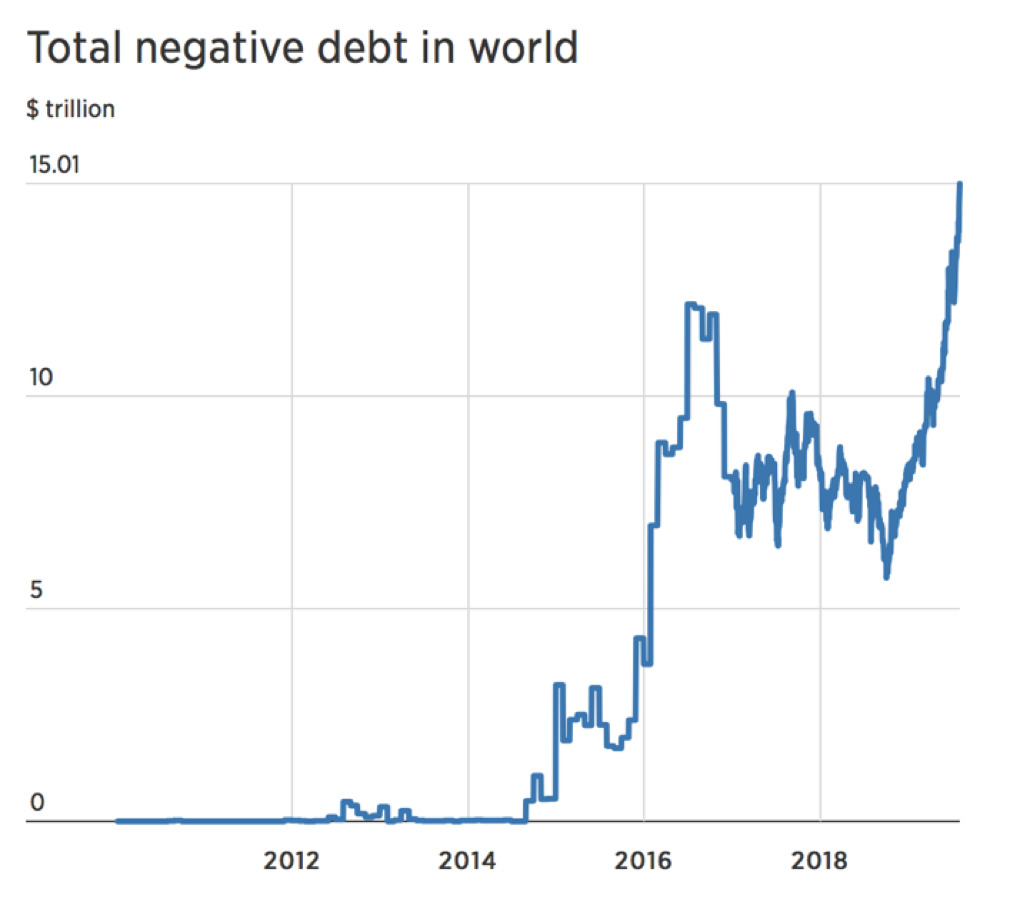 Investors and commentators are attributing the rout in rates to economic slowdowns, the China-U.S. trade war, ageing of the global population and QE.

It’s a phenomenon that is recognised by central banks including our own central bank, The Reserve Bank of Australia.

Back in July, European Central Bank (ECB) President Mario Draghi told markets that the ECB will probably lower interest rates before the end of the year, stating, “a significant degree of monetary stimulus continues to be necessary to ensure that financial conditions remain very favorable and support the euro area expansion.”

It’s the “continues to be necessary” part of the statement that has me concerned for investors because while lower rates boost valuations, evidence suggests they aren’t helping the real economy rise out of its funk.

Demand for negative yielding bonds is evidence that bond investors are concerned; meanwhile, equity investors are euphoric, producing profitless prosperity, which itself is unsustainable.

As Herb Stein once wryly observed, if something can’t last forever, it must stop.

Perhaps Warren Buffett has read Herb Stein’s thoughts, explaining why Berkshire Hathaway – rated AA by Standard & Poor’s – has announced the issue of US$4 billion of five-year yen-denominated bonds with a coupon of about 0.17 per cent. And recall Berkshire is already holding record levels of cash.

Buffett has made several references in the past to the wisdom of borrowing when cheap to do so, ahead of rates rising or in anticipation of better value.

So, if it’s good enough for Berkshire Hathaway, shouldn’t you be thinking about returning to the tenets of value investing too?