Over the past year, the Australian dollar has fallen against the US dollar. It’s a trend I don’t expect will change any time soon. This has important consequences for many Australian businesses and for investors.

Just over a year ago, I published a blog post looking at what had happened during the previous year in terms of currency movements. Given it is now becoming clear that the RBA will start cutting interest rates again and there is generally a very clear correlation between interest rates and currency movements (see the theory of Interest Rate Parity), I thought it would be interesting to revisit the analysis and see what has happened in the last year.

To recap, when I wrote the last update on currency movements, the US dollar had dropped by about 10 per cent over the preceding year compared to a basket of the world’s other major currencies (the DXY index). We can see this has steeply reversed, and the US dollar has instead increased by a bit over 4 per cent since my last post which is to be expected given that the Federal Reserve increased US interest rates three times during the period to December 2018: 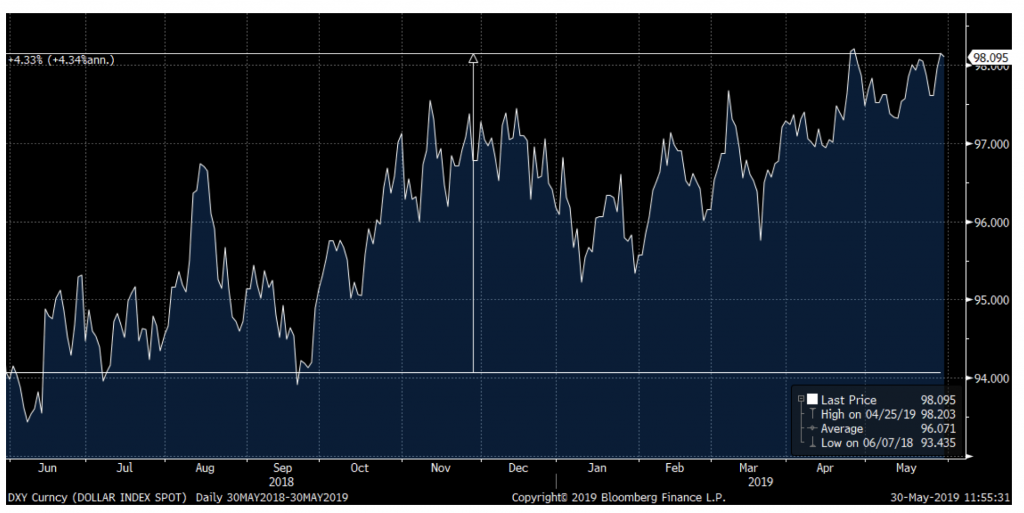 If we now look at how the Australian dollar has performed compared to the US dollar during the same period, we can see that it has fallen by about 9 per cent:

This is to be expected given the interest rate increases in US and the increasing expectation that the RBA will have to cut interest rates.

If we compare to the Euro, we can see that there have been some ups and downs during the period but that overall the exchange rate is roughly the same as when I last wrote about it:

The picture looks quite similar when we compare the Australian dollar to the Chinese Yuan – after some ups and downs, we are at very similar levels as last year:

The implications for companies are the same as I wrote a year ago:

In The Montgomery Fund, we are continuing to be defensively positioned and are generally overweight export oriented companies compared to the overall index as we do not see that the interest rate differential with the US will start to reverse any time soon.

Over the past year the Aussie dollar has fallen against the US dollar, and considering a very clear correlation between interest rates and currency movements it’s a trend that may not change any time soon. Click To Tweet