While Australia’s declining housing market is good news for first-time home buyers, it’s bad news for the economy. One big concern is what’s called the reverse wealth effect. Another is the adverse impact that a falling market could have on state budgets which could in turn have an impact on infrastructure spending.

Australia states get a significant portion of their revenues from stamp duty on property transactions. The rate varies between the states but is between 3-5.5 per cent. The table below shows the stamp duty payable on a $1 million property. 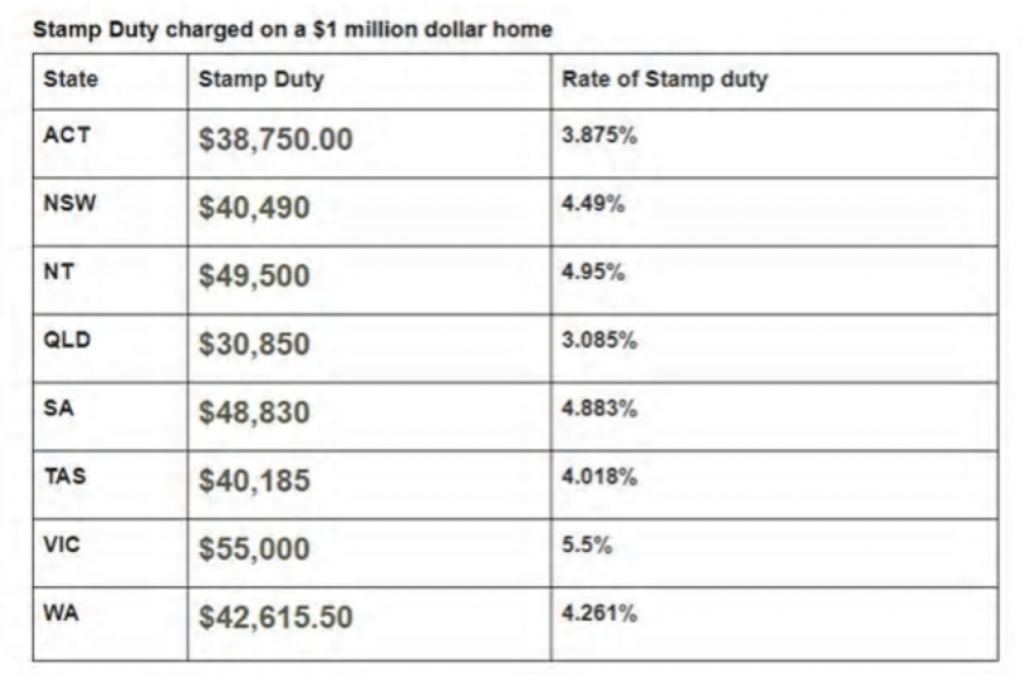 As you can see, it is substantial sums of money and given the size of the property market, it adds up to significant money overall.

In total, the states around Australia collected a bit over $50 billion in stamp duty in FY2017 which is almost double the amount from 10 years before. 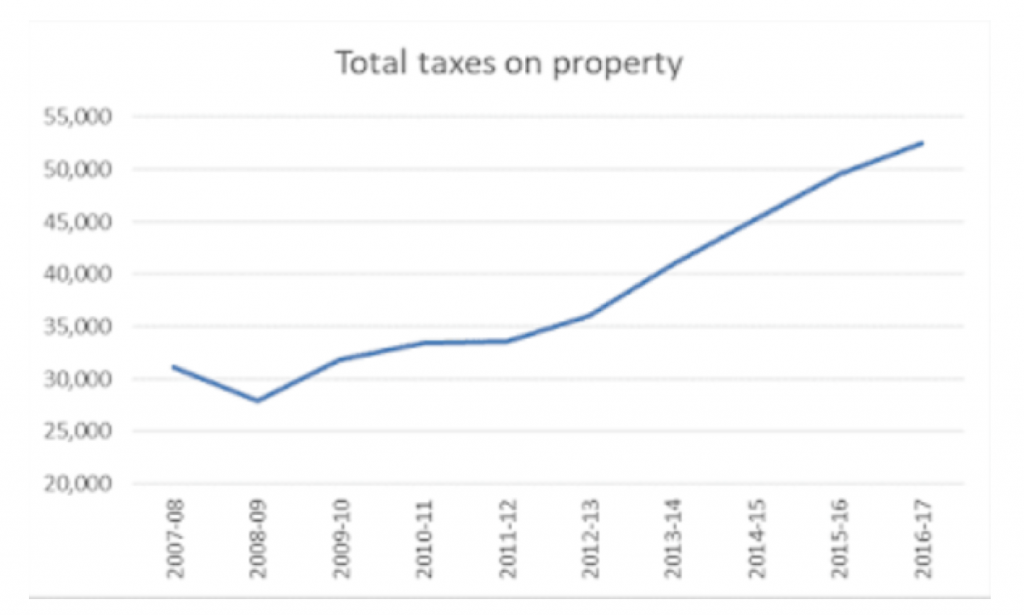 The states of NSW and Victoria have been the biggest beneficiaries of stamp duty due to having seen the highest increases in property prices. In 2017, stamp duty receipts accounted for 10.8 per cent of total NSW state revenues and 10.6 per cent in Victoria. 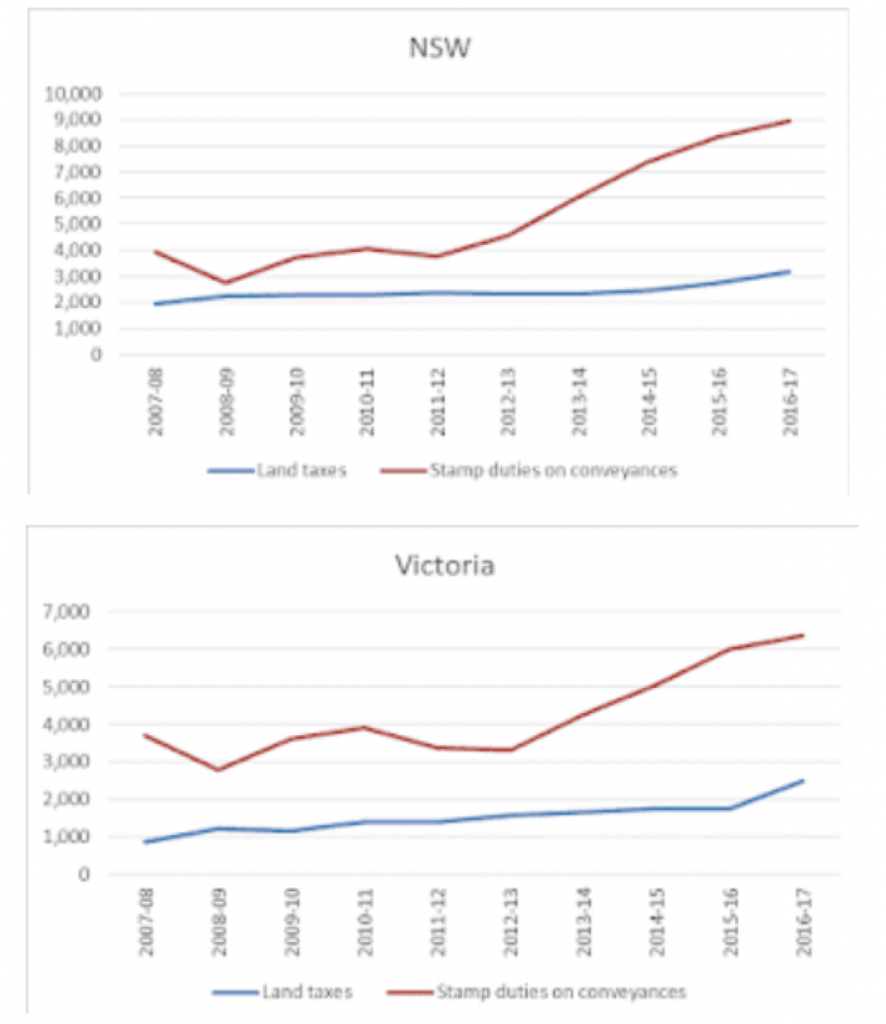 What is happening in the property market has therefore the potential to have a large impact on state finances.

The pricing trends are well known. Sydney is down the most over the last year with a bit over 7 per cent and with Melbourne starting to approach a 5 per cent fall during the last year. 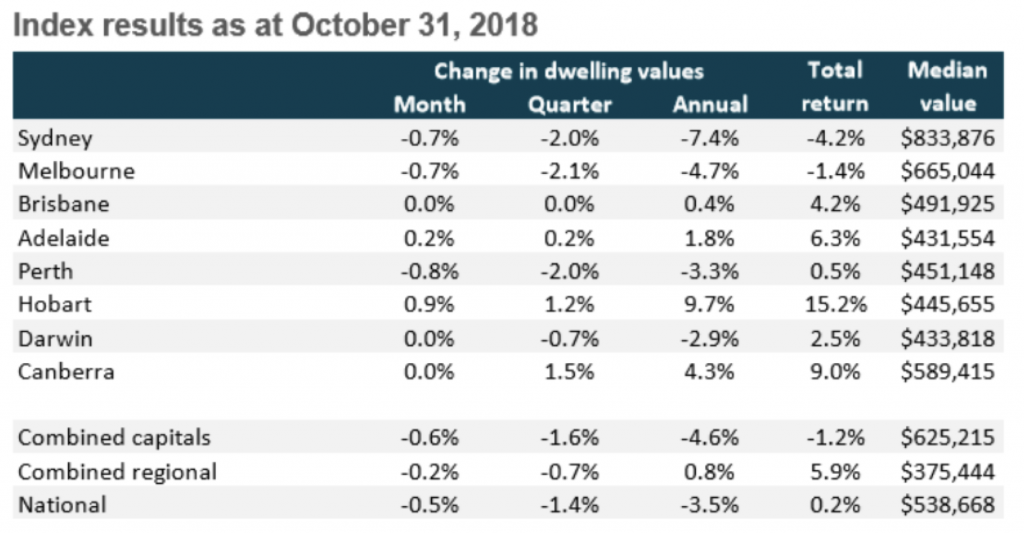 Adding to falling values, is the upper end of the market is falling the most and as stamp duty is a progressive tax, as it is only collected above a threshold, this means that stamp duty overall is falling more than the average house price falls should indicate: 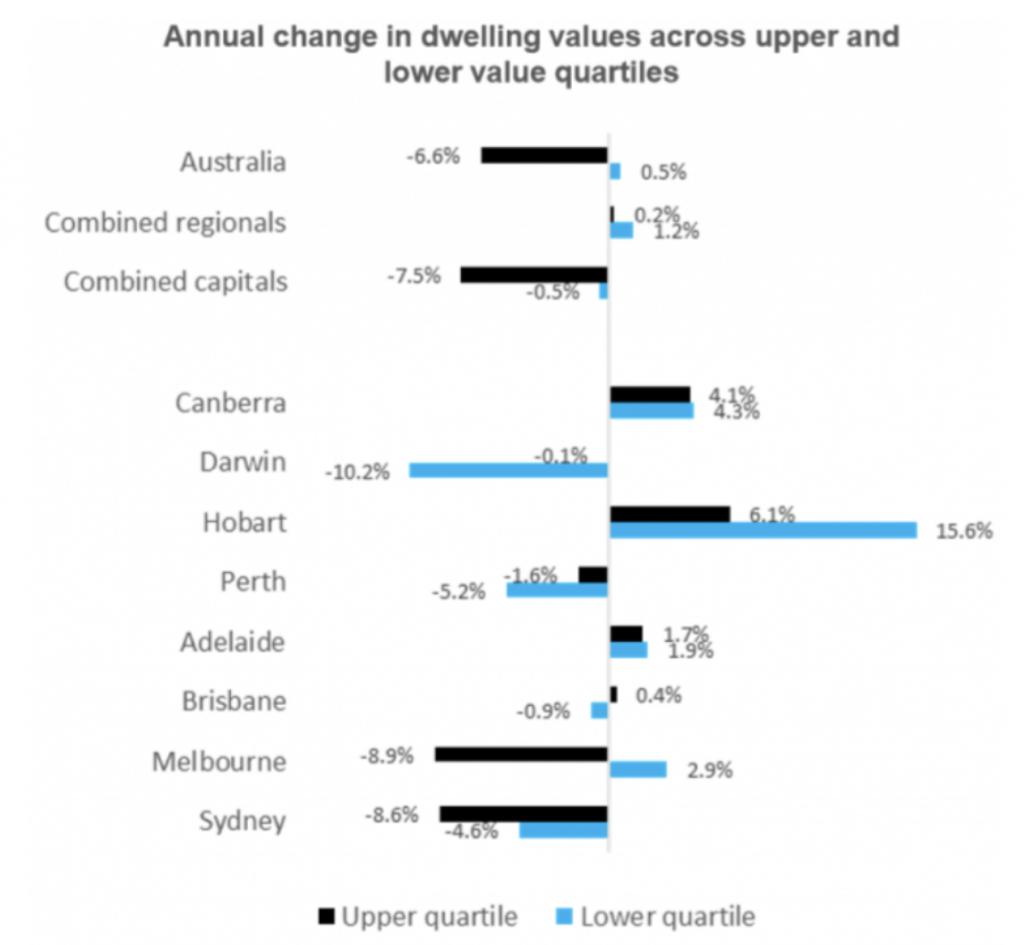 What is probably less known is that the transaction volume has also collapsed as can be seen in the chart below from Macquarie which shows that current transaction volumes are the lowest since the early 90s and down around 30 per cent since the most recent peak in 2016. 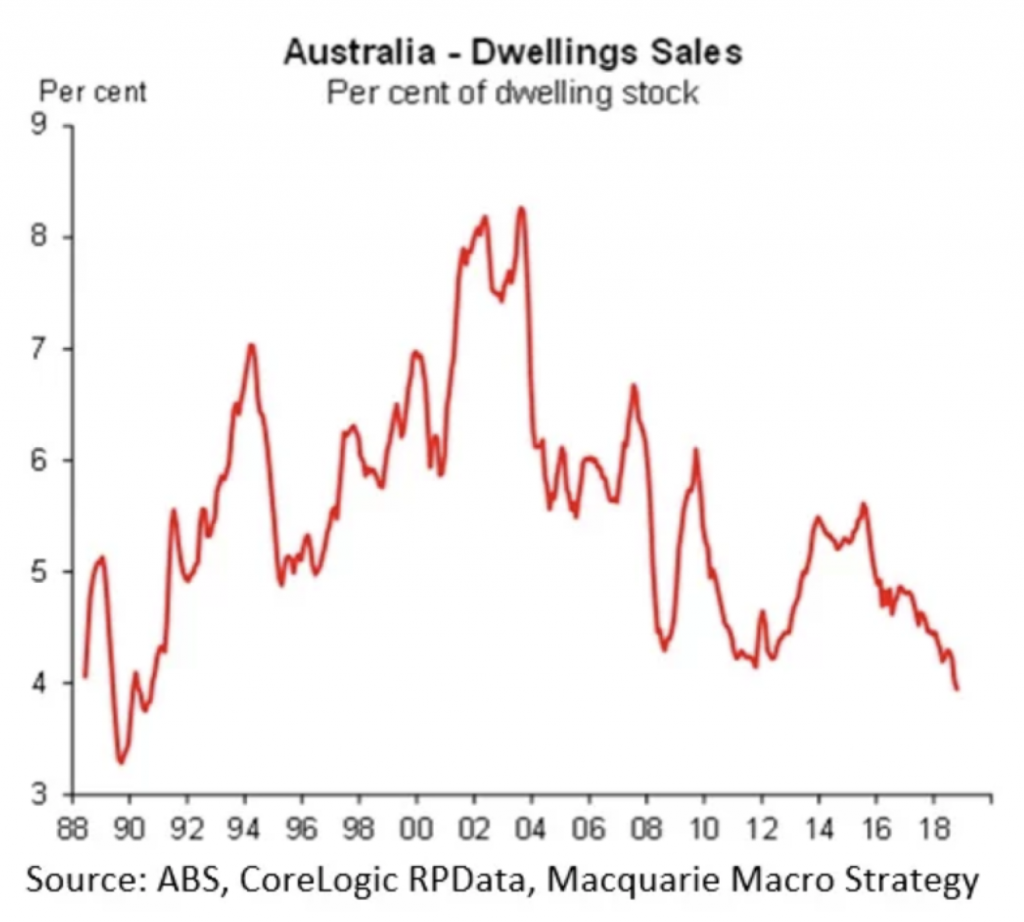 The combination of falling house prices, negative mix effect from the most expensive homes falling the most and the steep drop in transaction volume must surely mean that the treasurers in our two most populous states should take a very good look at the assumptions for their budgets for the coming years. 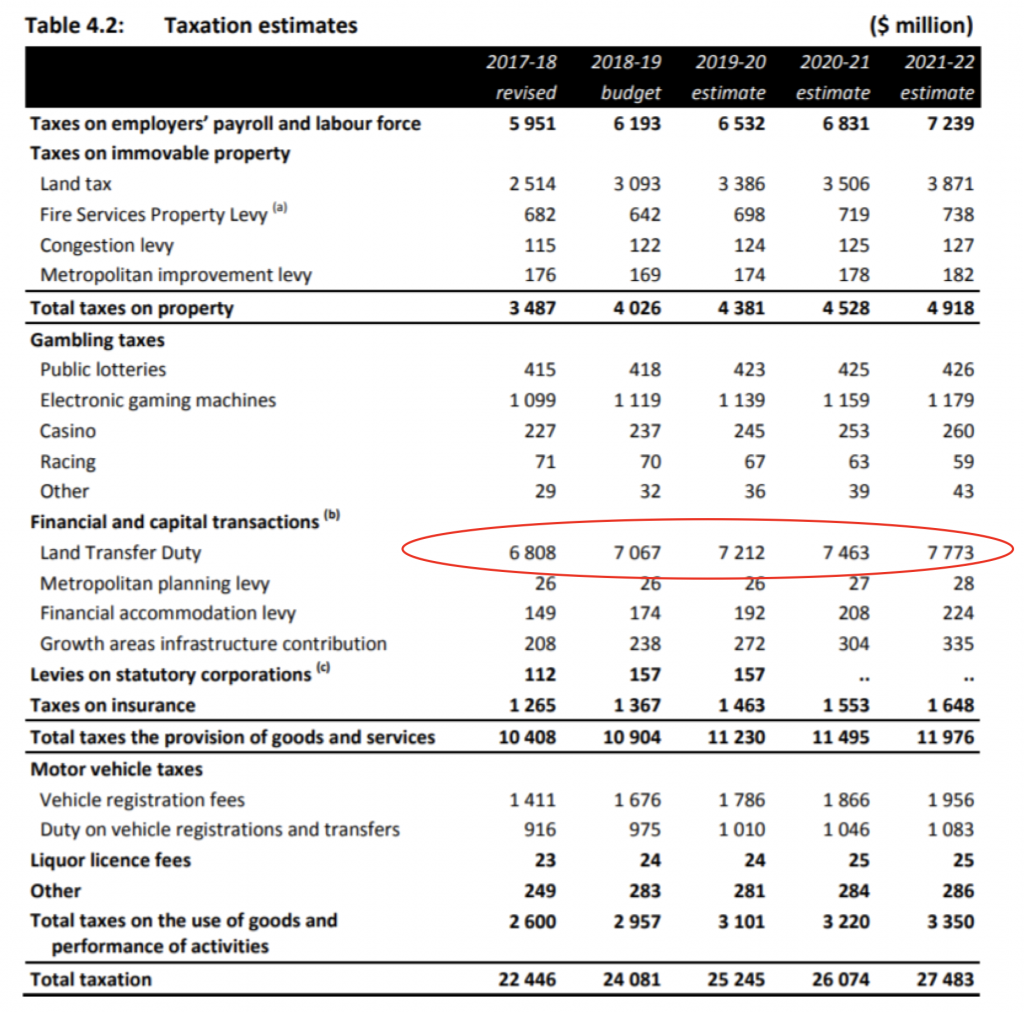 The next step is then to ask what the implications are if the budgeted strong recovery does not happen?

The governments have a few choices:

What we can be certain of is that the state treasurers are watching the property market with great interest and are hoping for a quick recovery!