This week’s insights are focused on the RBA’s minutes released earlier in the week. The RBA has identified additional considerations being made that will influence their future rate decisions, with a hint of a slow down in rate rises.

Data from the latest payroll, jobs and wage estimates recorded is for the two weeks up until the 17th of September shows that:

As a result of the extremely tight labour market, payroll jobs have demonstrated slow growth over 2022. The average monthly growth over the past six months has been 0.3 per cent. This time last year we were facing very different labour market conditions due to the Delta Covid-19 variant,  where payroll jobs fell due to lockdowns.

The rise this month was experienced across all states and territories with the ACT and WA leading the rise, up 0.7 per cent and 0.6 per cent respectively. The education and training industry accounted for more than a third of the payroll job increases. Wages paid over the month to mid September were up 2.7 per cent, largely driven by the payment of periodic bonuses across multiple industries which tends to occur around September every year.

Ongoing wage pressure is expected to continue as inflation remains and the cost of living continues to rise.

After two years of little increase, overseas migration has begun to significantly contribute to Australia’s recent population growth. The country has experienced a large increase in yearly arrivals, which is up 183 per cent as of March 2022. With additional skilled migrants being able to return to Australian shores due to reduced restrictions, we would expect to see the labour market begin to adjust accordingly.

The September Labour Force statistics were released on Thursday, 20th of October, displaying early signs of stabilisation across most indicators: 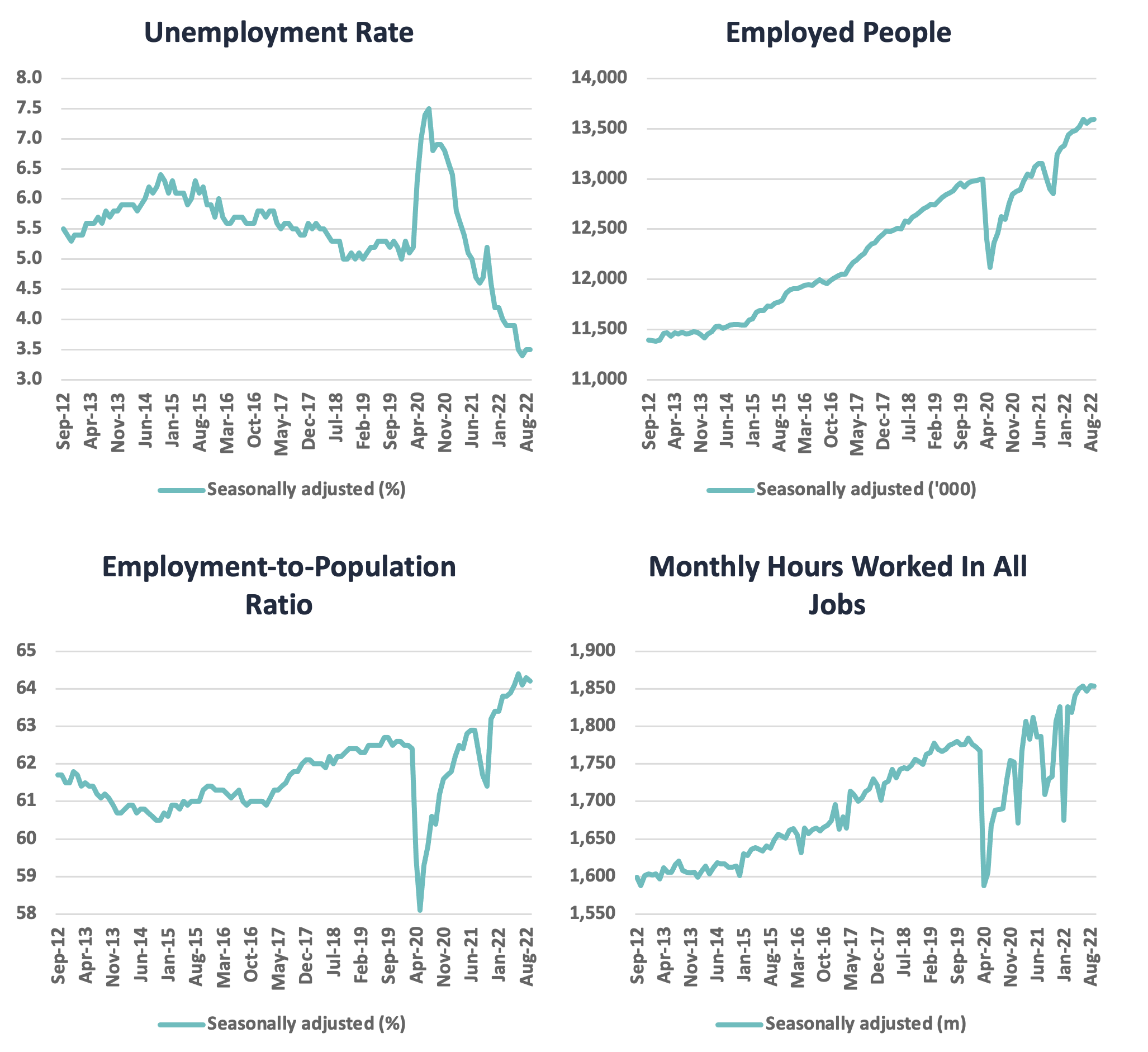 It is the investment team’s view that the tightness of labour market is at or near peak, operating in excess of its sustainable potential. We anticipate a mean reversion will be experienced over the coming data releases. This reversion will likely be driven by the return of migration and increased cost of capital as a result of the lagging impact of the RBA’s interest rate hikes and quantitative tightening, that will likely lead to the dampening of both consumption and investment.

Michele Bullock, Deputy Governor of the RBA, delivered a speech on Tuesday 18th October that provided insight into the RBA’s decision to increase the cash rate by 25 basis points as opposed to another widely anticipated 50 basis points, inline with the movements of most other central banks across the developed world.

The Deputy Governor stated that it was clear across all board members that a further rate increase was necessary. Inflation was too high and is anticipated to increase further, fuelled to some extent by demand side factors. Additionally, unemployment is at its lowest level in around half a century, which is expected to translate into upward wage pressure, further fuelling domestic inflationary pressure. 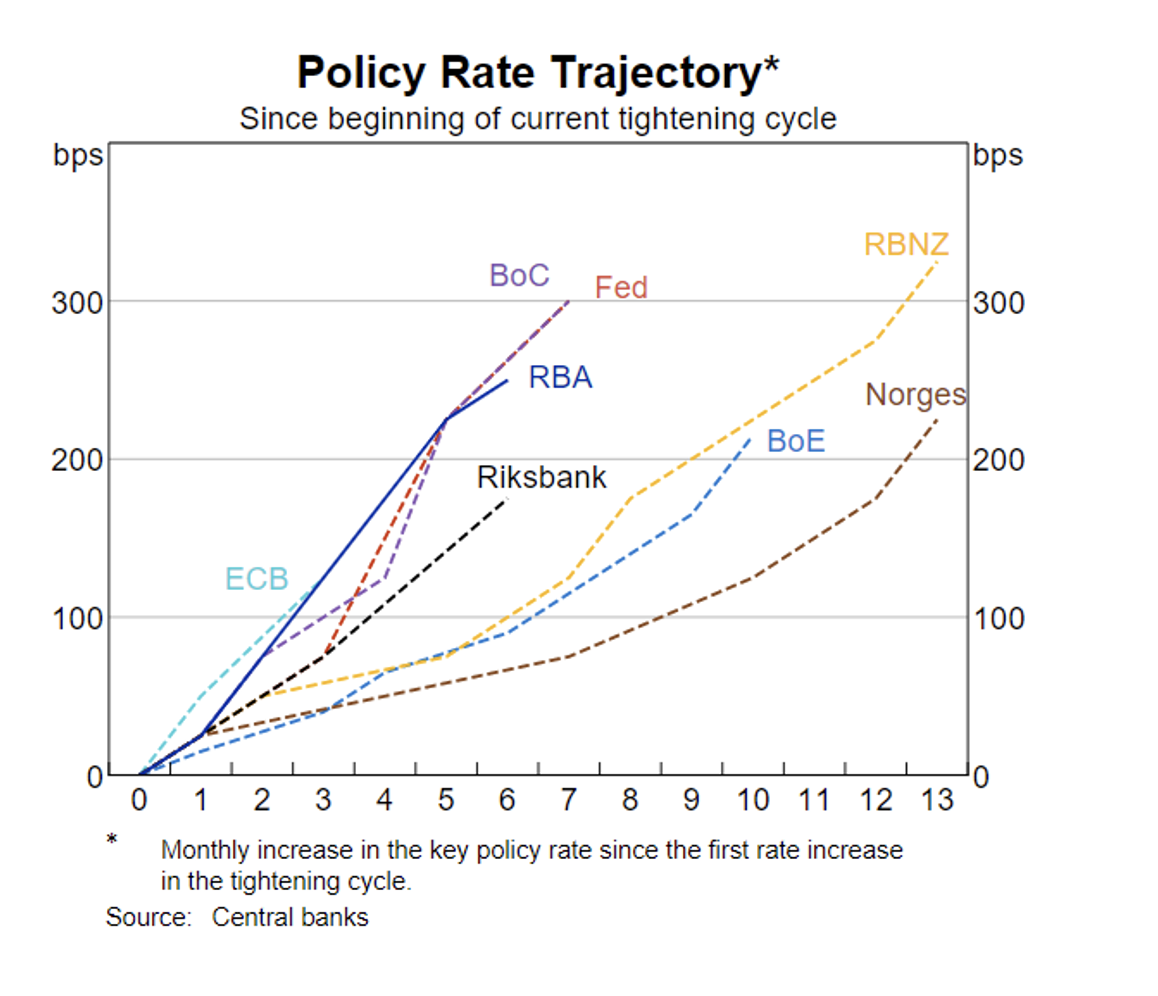 It was accepted across the board that interest rates have some way to go in order to achieve the target inflation rate of 2–3 percent. However, discussions have turned to the appropriate size of increases moving forward, particularly given the RBA’s ability to reset its cash rate monthly (with the exception of January), which is broadly more frequent than many central banks, such as the Federal Reserve or the Reserve Bank of New Zealand.

It was the investment team’s interpretation that the RBA Board will continue to increase the Cash Rate over the remaining two meetings of the year at 25 basis points per meeting – in line with current market pricing. We will pay close attention to household consumption data, particularly over the January break, before reassessing monetary framework over 2023, with decisions commencing February 7th.

You are reading an article about: Aura Group, Market commentary