Since January, world markets have been selling off. As a result, a number of quality small cap businesses are now trading at very attractive multiples. Is now a good time to invest in quality small caps?

Back in June, I asked the question in my whitepaper: are we there yet. At that stage, noting the selloff in the equity market was entirely composed of a contraction in price-to-earnings (P/E) multiples, we pointed to the fact earnings per share forecasts were still positive and required some downward revision, leaving the market vulnerable to further declines.

Today, it’s reasonable to assume a substantial amount of time has been afforded to analysts to review their earnings forecasts such that they might now, more reasonably, reflect outlooks for the remainder of 2022 and 2023.

It is perhaps the conversations those analysts are having with professional investors that has informed the latest investors sentiments survey published by Bank of America Merrill Lynch. That survey of 212 managers with more than US$610 billion in assets confirmed professional equity investors are now meaningfully ‘underweight’.  Indeed, a record 52 per cent of respondents are underweight stocks, while cash levels jumped amid bearish sentiment exceeding the levels witnessed during the 2008/09 Global Financial Crisis (GFC).

The extent of bearish sentiment can also be seen in P/E multiples for U.S. small caps. As Figure 1, reveals, S&P600 SmallCap P/E ratios are also level with those seen during the GFC.

According to the latest Ed Yardeni price-to-earnings chart pack published 16 September 2022, small cap P/E ratios have only been this low twice in the last 23 years. The first time was during the GFC, and more recently, during the outbreak of the COVID-19 pandemic.

According to the American Association of Individual Investors (AAII) latest survey, which notably was taken before the large drop in markets, bearish sentiment – expectations that stock prices will fall over the next six months – pulled back by 7.3 percentage points to 46.0 per cent (Table 1.). Bearish sentiment is above its historical average of 30.5 per cent for the 42nd time in the past 43 weeks and is at an unusually high level for the 27th time in the last 35 weeks. The breakpoint between typical and unusually high readings is currently 40.5 per cent. 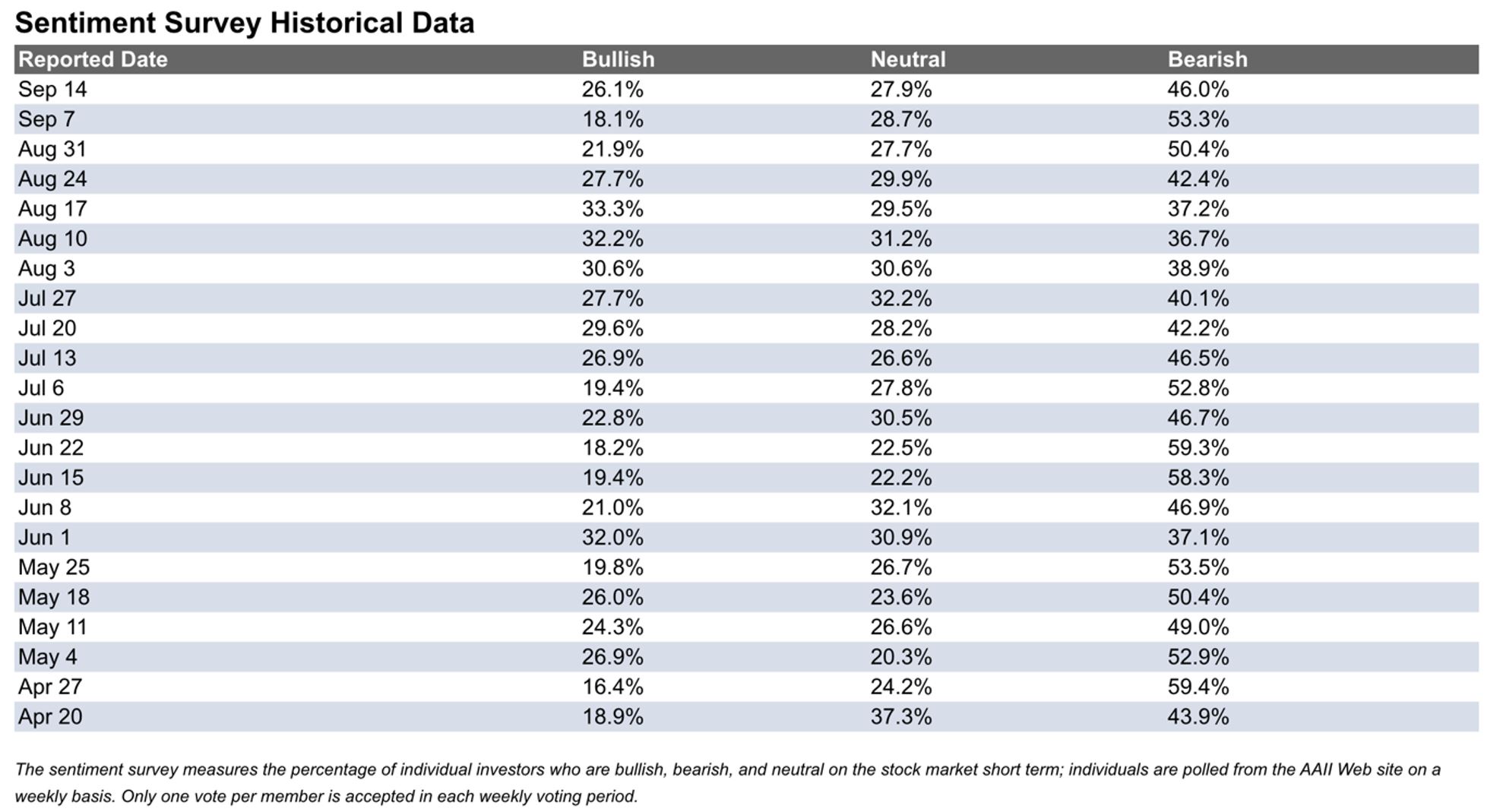 The AAII bull-bear spread (bullish minus bearish sentiment) is –19.9 per cent and is unusually low for the 28th time in 34 weeks. The breakpoint between typical and unusually low readings is currently –10.9 per cent.

Turning points, like all market moves, occur amid uncertainty, and with margin debt having reportedly declined precipitously, along with meme stocks and crypto currencies, an argument can be built that some of the financial excesses have been unwound.

The combination of P/E deratings, downward EPS forecasts revisions, and the unwinding of financial excess suggests investors with a longer timeframe are in a better position to assume reasonable returns from owning higher quality small caps. Of course the possibility remains earnings could contract further as the economy slows, and a flight to safety might spur further selling beyond that inspired by an unwinding of previous exuberance.  I remain invested in both the Montgomery Small Companies, and the Polen Capital Global Small and Mid Cap Fund and will continue to add should further declines transpire. Indeed, remembering the lower the price one pays, the higher the return, lower prices should be welcomed rather than feared.

We can never be sure what markets will do next. V-shaped recoveries are a rare exception.  Typically, bear markets bottom over an extended period of time amid a process involving retests of the lows and wild volatility. Nevertheless, what I can be sure about is my returns from investing in these small cap funds around these levels or lower will be better than the returns I will generate from investing at the market highs.

For more on how today’s low P/E ratios set investors up for attractive returns read this.