Who will win the battle over airport pricing?

Who will win the battle over airport pricing?

Right now, there’s a battle being fought in the media between Australia’s airport owners and the airlines that use them – Qantas and Virgin in particular – over the pricing of airport operations. The gloves are definitely off. But setting aside the arguments around relative pricing power of monopolies vs duopolies, one quirk of the debate focuses around falling bond rates, and how this impacts the investment landscape.

In my multi part series on Sydney Airport (ASX:SYD), I touched upon the existing regulatory regime for Australian airports and noted the ongoing Productivity Commission (PC) inquiry into airport regulation. To refresh, the inquiry was aimed at investigating the effectiveness of price and quality of monitoring in promoting efficient operations, timely investment and facilitating commercially negotiated outcomes in airport operations.

The findings and recommendations are important as any proposed changes can have a significant impact on passenger charges for aeronautical services, which will impact airport profitability and dividends.

Despite some potential issues around international charges for Sydney and Brisbane airports, the draft report found the existing light-handed regime was generally working as intended and helped spark a mini-rally in the SYD share price at the time. 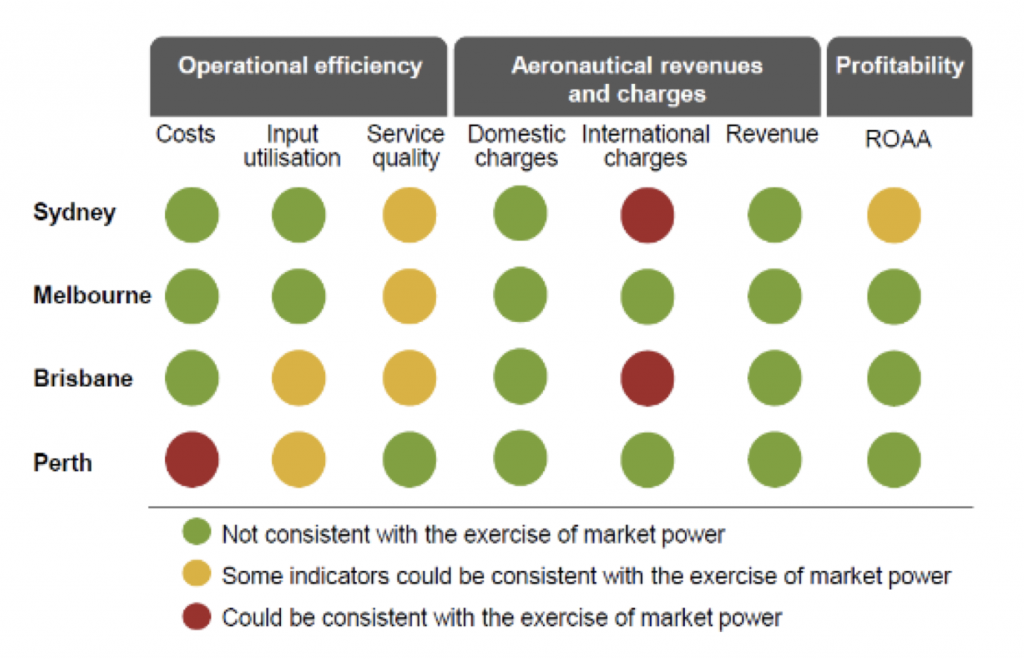 While the final report (due for release late October) is expected to be broadly consistent with the draft, the issue has attracted significant media attention following a rare joint address at the National Press Club by the Qantas and Virgin CEOs calling for an arbitration process to resolve disputes. The Qantas CEO has gone so far as labelling airports as “investment unicorns” due to their monopoly status enjoying unregulated revenue streams. The airports have hit back by saying an arbitration process will stymie investment and that Qantas and Virgin for the most part enjoy a cosy duopoly on domestic airline services, especially regional services.

For its part, the ACCC – the entity responsible for airport monitoring – appears to be on the side of the airlines, calling for airlines to have access to independent arbitration.

The following graphic from the Australian Financial Review shows the current state of play with the various vested parties: 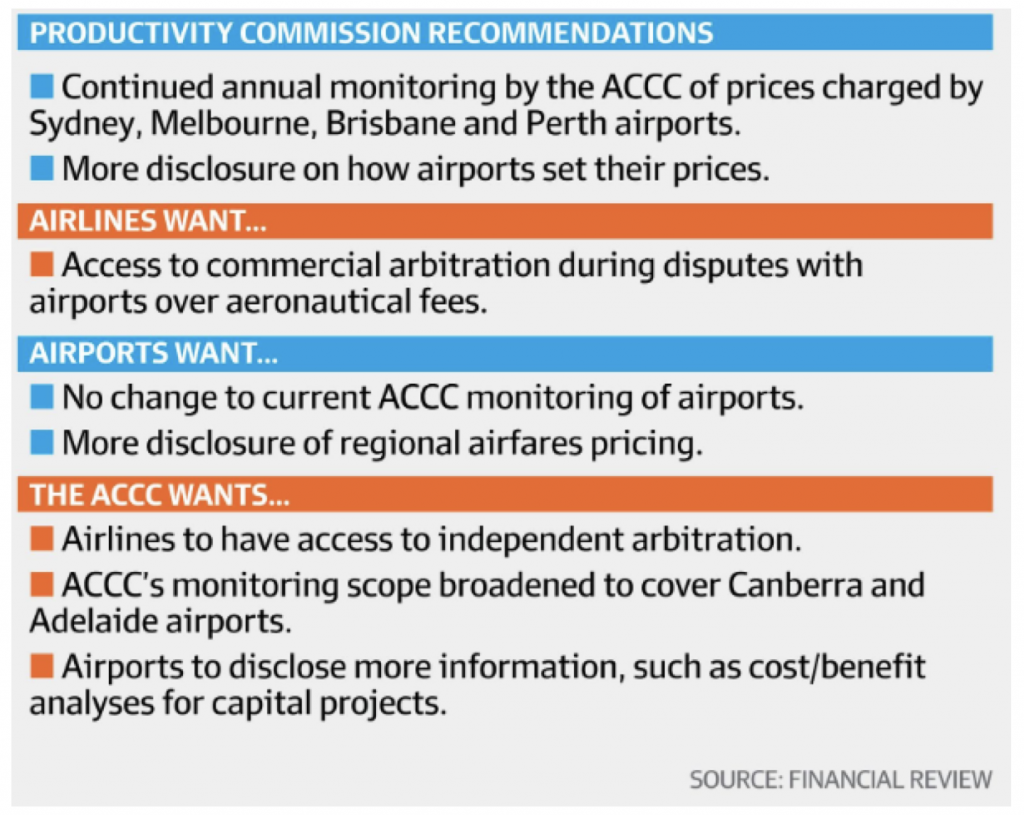 What is at stake?

The issue at stake is the return on investment for what is a monopoly asset – despite the airports’ claims that competition exists as travellers can choose other holiday destinations, any Sydney resident has no choice but to use the airport when flying in and out of the city.

Any change to the status quo may impact Sydney’s dividend as the airport currently generates around 40-45 per cent of its earnings before interest, tax and amortisation from aeronautical services, as opposed to commercial ventures such as Retail and Property. The existing aeronautical services agreement between Sydney and major airlines (the Board of Airline Representatives, or BARA) comes up for renewal in mid-2020.

A part of the negotiation in setting airport services fees is based on the airport receiving a “commercial” return on its investment dollars largely in the form of a per passenger charge.

For example, more than half of SYD’s 3-year capex guidance of approximately $900 to 1,100 million is slated for aeronautical services. SYD factors in this investment (along with service requirements) when negotiating passenger charges with airlines to ensure it generates a return commensurate with hurdle rates.

Aeronautical returns in a world of falling rates

Every market participant is aware of how global rates have for the most part followed a downwards trajectory over the past 5+ years – with Australia being no exception. Falling rates not only have an impact on asset valuations, but they (theoretically) should impact hurdle rates of return on investment for most companies.

For monopoly assets like Sydney Airport, the relationship between lower rates and required return on investment is more linear given the relatively high degree of predictability of future revenue.

In general, monopoly assets are regulated by their governments to ensure there is no price gouging to generate super profits for their owners. For example, Aurizon’s below rail network (AZJ) has a prescribed rate of return which is re-set by the Queensland Competition Authority (QCA) every 4 years. When setting AZJ’s revenue, it refers to the benchmark risk-free rate as a “building block” to determine the overall return allowance on AZJ’s Regulated Asset Base. In a world of falling rates, this has meant falling revenues for AZJ’s rail network.

Sydney (and the other major airports) however are not bound by a framework around prescribed returns. Based on the ACCC’s monitoring report into airports, aeronautical revenues of the 4 major airports have been relatively stable over the past 3 years despite a significant fall in global rates. The longer-term trends are more mixed, although it is worth noting Melbourne / Perth (the two airports with the greatest decline) have reported large additions to its asset base – i.e. the denominator of the return calculation – in anticipation of future growth.

It is this point that has likely prompted the “investment unicorn” comment by Qantas CEO Alan Joyce.

What about the airlines?

On the flip side, it’s arguable that incumbents Qantas and Virgin enjoy a form of duopoly for domestic services, although international routes generally have more competition in terms of international carriers and – in general – destination flexibility (international passengers are also more lucrative for airports).

Airports also contend any savings delivered would not necessarily translate to lower passenger fares, with the airlines pocketing any benefits. It’s also worth noting that airport fees are not a significant component of the ticket fares for most passengers.

While this scenario is entirely plausible – for airlines, any abnormal profits for a sustained period is likely to attract increased competition.

And coming full circle, any potential entrant would base their decision on adding services on…. a projected return on investment.

One thing is for certain – vested interests are at the heart of every argument.