The national debate over immigration policy has been heating up for some time. Clogged roads, crowded trains and buses, and surging house prices are just some of the issues being blamed on our increased migrant intake. So, which businesses would be impacted if the government tightens the tap?

As a relatively new immigrant to Australia – I first came here as an exchange student from Sweden in 2000 and met my (now) wife in Sydney before permanently moving here in 2012 – and also as someone who has lived and worked in five different countries, the immigration debate is something I follow with interest.

In the public debate over the last year, I have noticed a shift in tone towards a more restrictive immigration policy. We have though not yet seen any move by the leadership of the major two parties to change anything even if internal debate has intensified.

Without weighing into the debate on whether the current level is too high or too low, I’d like to suggest possible implications for various sectors if there were to be a change in the immigration policy.

The Australian Population Research Institute (which brands itself independent but is generally quite critical of the current level of immigration) this week released a report titled “Immigration and public opinion in Australia: how public concerns about high migration are suppressed”[1] discussing the reasons why there has historically not been any real public debate about this. I’ve reproduced a chart from this report below.

Australia has since 2005/6 seen a very significant increase in the Net Overseas Migration (NOM) from a level of ~70,000 per year to about ~200,000 per year. NOM is now the major contributor to population growth as the natural increase is stable at around 125,000 per year. 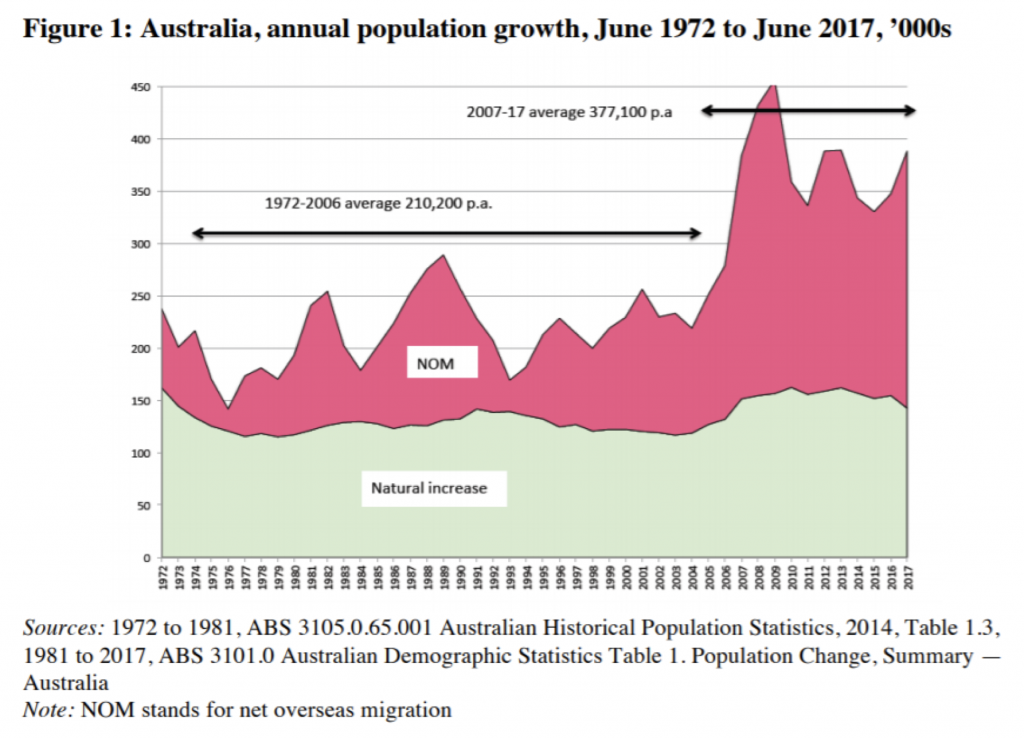 There are many reasons for this growth in NOM, but to list a few:

There are potential negatives from immigration, especially rapid immigration. Some of these include:

Recently, a few opinion polls have shown that the majority of Australians are in favour of reduced immigration[2]. Internal debate within the government about the right level of immigration is also underway[3].

Again, without taking a side on whether Australia should reduce or maintain the current level of immigration, let’s look at what effects a potential cut to immigration could have on the Australian economy:

There are also a few sectors that could potentially benefit:

Overall, it is probably fair to say that lower levels of immigration would be negative in the short term for Australia if measured through a purely economic rationalist’s lens. The same lens however might suggest a benefit over the longer term or using a broader set of measures that take into account less tangible factors.

The debate is definitely worth watching, and even participating in. Importantly, investors must watch for any change in policy.

[2]   Report on Immigration and public opinion – access this here.