What to make of KKR’s bid for Ramsay Health Care

What to make of KKR’s bid for Ramsay Health Care

As you’ve probably read in the press, a consortium led by US-based investment behemoth, KKR & Co, has just lobbed a $20 billion bid for Ramsay Health Care (ASX:RHC), Australia’s dominant private hospital business. This values each RHC share at an all-time high of $88, well above the previous day’s close of around $64. So it’s potentially good news for RHC investors – including The Montgomery Fund.  But what are the chances of the deal going through?

Back in September last year, I published an article looking at Ramsay Health Care’s FY21 results and pointed out the difficulties the pandemic had caused in terms of lost revenues due to elective surgery bans, increased costs due to staff being sick/close contacts and increased costs for personal protective equipment. We were positive on the outlook for a recovery in surgery volumes once the world opened up again. The longer surgery restrictions are in place, the more the waiting lists increase and the harder the doctors will eventually have to work to clear these waiting lists which should benefit the hospital operators as their incremental margins should be high on additional throughput.

Since this time, which was towards the end of the Delta wave of COVID cases, we had the Omicron variant sweeping through Australia and countries in Europe where Ramsay operated hospitals and this resulted in further restrictions on elective surgery. The share price of Ramsay did not recover. From the chart below, we can see that the share price (since the day of our article being published) was down 3.6 per cent up until Tuesday compared to the ASX300 which was up 4.4 per cent so an 8.0 per cent underperformance has been frustrating as we continued to believe in the longer-term story.

Then, on 19 April, the Australian Financial Review released an article suggesting that a consortium led by KKR, the large global private equity firm, had approached Ramsay’s board with an indicative bid at $88/share and had been allowed to perform due diligence. Yesterday, Ramsay confirmed this and the share price has reacted positively and is at the time of writing trading at $81/share which is up 25 per cent compared to the price yesterday, but still about 8 per cent below the $88 bid price (actually the bid price is $87.515/share as it will be reduced by the dividend of $0.485/share already paid on 31 March). This is an all-time high level for Ramsay and very positive news for investors in The Montgomery Fund.

So why is a private equity firm interested in Ramsay? I can see a number of reasons why:

So what will happen now? I see four real possibilities:

We can summarise this thinking in the following table which shows a probability weighted outcome of $83.7/share or about 6 per cent higher than the current share price. This indicates to me that the market is assigning higher probability on the bidders walking away than I do and therefore we are retaining most of our shares in Ramsay despite the pop in the share price today: 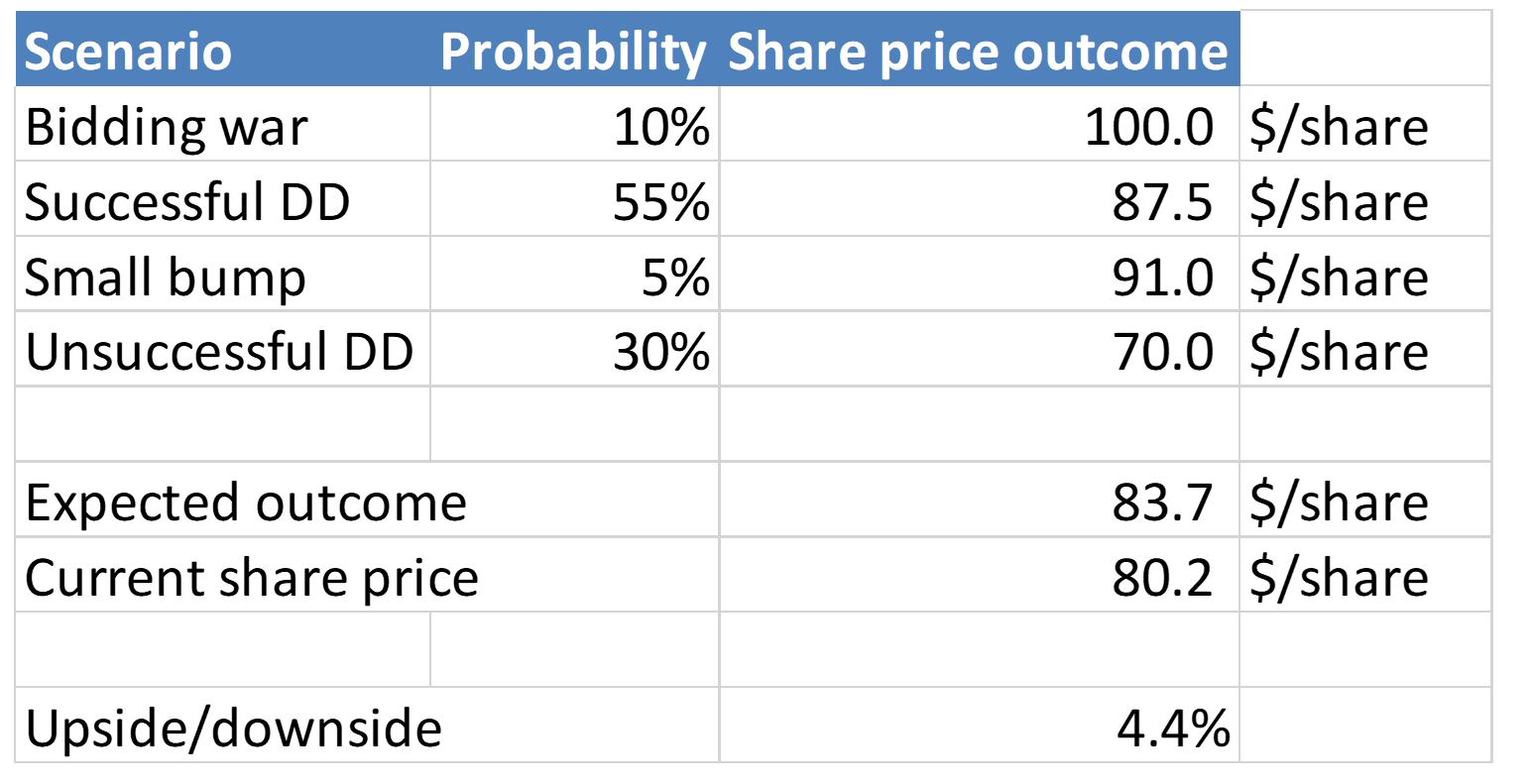 The Montgomery Funds own shares in Ramsay Healthcare. This article was prepared 21 April 2022 with the information we have today, and our view may change. It does not constitute formal advice or professional investment advice. If you wish to trade Ramsay Healthcare you should seek financial advice.