What to make of ANZ’s profit result

What to make of ANZ’s profit result

Investors in Australia’s major banks have had a tough year. Bank profits – and their dividends – have been pummelled by fines emanating from the financial services royal commission and AUSTRAC investigations, as well as the COVID-19 recession. However, the recently announced full-year profit result from ANZ may put some fears to rest for now.

ANZ was the first of the major banks to report its result to 30 September 2020. While the bottom-line result was roughly in line with market forecasts, as usual, the devil was in the detail.

The revenue line was below expectations and lower quality from a forward-looking perspective. Loan book growth was weaker than expected in the second half of the financial year. The source of the weakness was the institutional loan book. In March 2020, corporates drew down on existing credit lines to build liquidity given heightened risk from COVID-19. This unwound in the second half of the year with the period end institutional net loans and advances at the end of September falling A$41.8 billion or 21 per cent relative to 31 March to A$157.6 billion.

Excluding the Institutional loan book, net loans and advances increased just 0.5 per cent over the six months to September 2020 with 2.6 per cent growth in the mortgage book being offset by the impact of the stronger AUD on translated closing book values from New Zealand and other overseas operations, as well as a sharp contraction in outstanding unsecured consumer credit balances.

Net interest margins (NIM) continued to contract. NIM before one-off interest costs from customer remediation fell 10 basis points to 1.59 per cent in the second half of FY20 relative to the first half. As is the case for all of the banks, the low interest rate environment is putting downward pressure on NIM due to limitations on their ability to reduce interest rates paid on transaction and other low rate deposit accounts and the impact of lower returns from the liquids portfolio. The rolling hedge book run by the banks on the portfolio of liquid assets smooths the impact of the dramatic fall in the yield to maturity generated on medium duration fixed interest securities, but this just means the impact of lower returns generated from the securities will flow through gradually over the next 3 years. This will act as an ongoing headwind for NIM over that period. Management estimates that this will reduce NIM by around 3 basis points in 1H21 relative to the underlying 1.59 per cent NIM generated in 2H20 assuming the RBA does not change current monetary policy settings.

Non-interest revenue surprised to the upside, growing 13 per cent in 2H20 relative to 1H20, but only due to stronger than expected trading revenues. This revenue line tends to be volatile based on market conditions and the heightened level of risk and risk aversion among clients caused by COVID-19 delivered a result that is likely to be higher than what is sustainable in future periods.

Non-interest revenue excluding markets and large notable items fell 5 per cent in the second half relative to the first six months of the financial year, mainly due to a 5 per cent reduction in fee and commission income.

Looking forward, the average loan book is likely to decline in 1H21 relative to 2H20 given that gross loans and advances (GLA) at the start of the new period was 3 per cent below the average GLA from 2H20. When this is combined with a NIM that is likely to fall further in 1H21, net interest revenue will probably continue to fall in 1H21. At the same time, markets revenue is more likely to revert back toward more normal levels, resulting in lower non-interest revenue than in 2H20.

Operating costs were roughly in line with expectations as efficiency gains in the business-as-usual cost lines were offset by increased investment. In the presentation, management revised its timetable for achieving an A$8.0 billion operating cost run rate from the end of FY22 to the end of FY23 due to the increasing opportunity for investment. The market had viewed this target as optimistic and as such, was not overly concerned by the revised timetable.

Will the recession be as deep as initially expected?

Credit impairment charges were lower than expected due to an improvement in the economic outlook and modelling for the institutional business. ANZ now expects that the recession resulting from the pandemic will not be as deep as it had assumed at the end of March, but that the economic downturn will last longer than previously expected. This resulted in a smaller than expected increase in collective provision overlays in 2H20, which were limited to the Australian Retail and New Zealand operations. 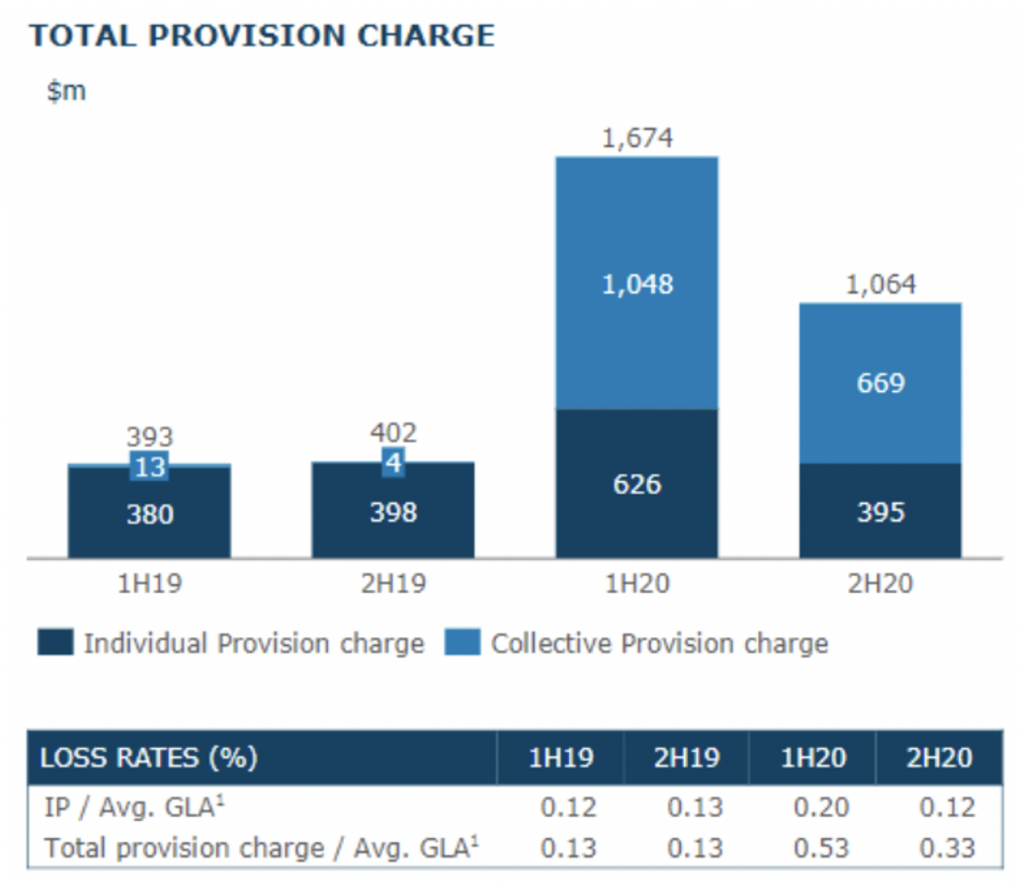 However, at this point in time, the level of uncertainty regarding future credit losses resulting from the pandemic remains high given the impact of unprecedented levels of government stimulus and repayment deferrals offered by the banks.

Looking at the later support mechanism, of the 95,000 Australian home loan accounts that were granted repayment deferrals over the last 7 months, 55,000 have had the deferral period expire or voluntarily cancelled the hardship allowance. Of these 55,000, 79 per cent have returned to full repayments, 20 per cent have had the deferral period extended, and 1 per cent have had their loan restructured or moved to hardship status. There remain 51,000 home loan accounts in Australia on deferred repayments, with an outstanding cumulative loan book balance of A$19 billion, or 6.9 per cent of the total Australian mortgage book. This is down from a peak of 86,000 accounts with A$32 billion of borrowings at the end of August.

Deferrals of business loans have also more than halved since June, with 10,000 accounts totalling A$4 billion of loans remaining on deferred payments as at 15 October. This has fallen from a peak of 22,000 accounts with cumulative loans of A$10 billion at the end of June.

ANZ’s capital levels generally surprised to the upside with the key common equity tier 1 ratio (CET1 ratio) increasing to 11.34 per cent as at 30 September. Additionally, the bank’s perception of reduced credit risk in the institutional book means that it now expects average risk weights to increase 65 basis points as a result of the pandemic rather than the 110 basis points it had forecast in May. This reduces the dilution to the CET1 capital ratio from expected increases in delinquencies and bad debts in future periods and increases the likelihood that ANZ can maintain its capital ratio above ARPA’s ‘unquestionably strong’ threshold. This is positive for the outlook for future dividends.