The Commonwealth Bank (ASX:CBA) released its results for the six months to December 2020. The numbers were generally better than expected across most lines resulting in a better earnings result than consensus sell side forecasts.

The three main positives from the result were the:

Revenue growth in the second quarter of FY21 accelerated to around 1.9 per cent. This is an improvement on the declines recorded in the previous two quarters and fairly anaemic year on year growth over the last two years. 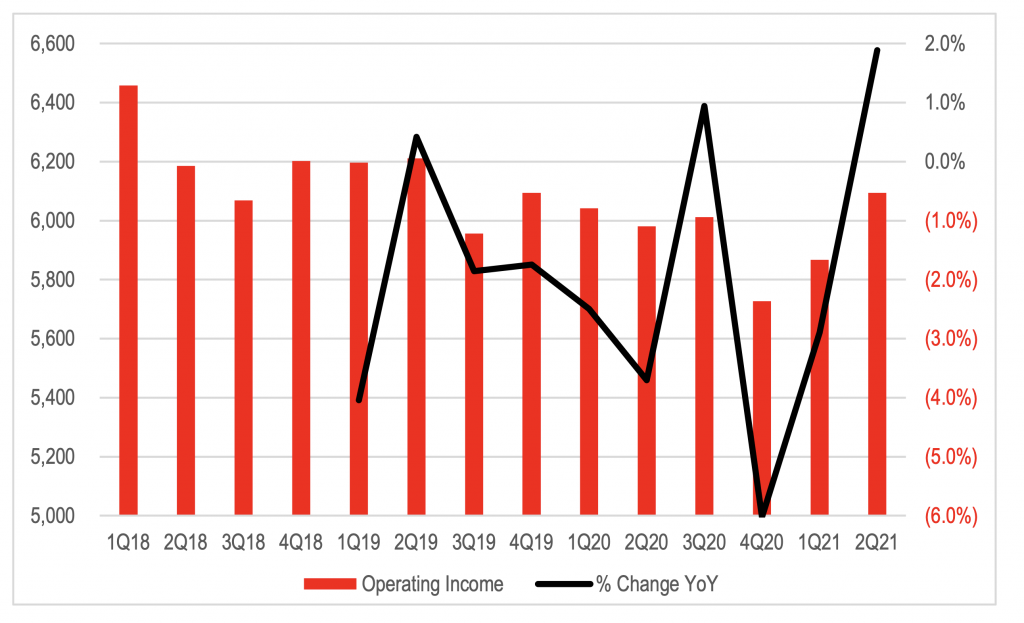 While the acceleration in non-interest income growth was partly due to increased trading volumes, which is unlikely to be sustainable, fee growth also improved, as did loan book growth and the demand for credit, which is encouraging. This is consistent with the recent data that has indicated a material increase in demand for credit. This step up in demand was initially focused on mortgage credit, but is becoming more broad based across the economy. CBA’s market leading share has seen it benefit directly from the increase in activity and demand.

The reduction in the number of loans on repayment deferrals has reduced significantly over the last six months. However, this has not resulted in a meaningful increase in the rate of loan impairments to date. While loan book quality has been bolstered by the enormous fiscal and monetary stimulus from the Federal Government and RBA, this has been a better than expected outcome.

This saw bad and doubtful debt charges remain low and the collective provision coverage increase from 1.41 per cent of credit risk weighted assets at the end of June 2020, to 1.54 per cent at the end of December 2020. This places the balance sheet in an even stronger position to cover any potential COVID driven spike in loan impairments in future periods. 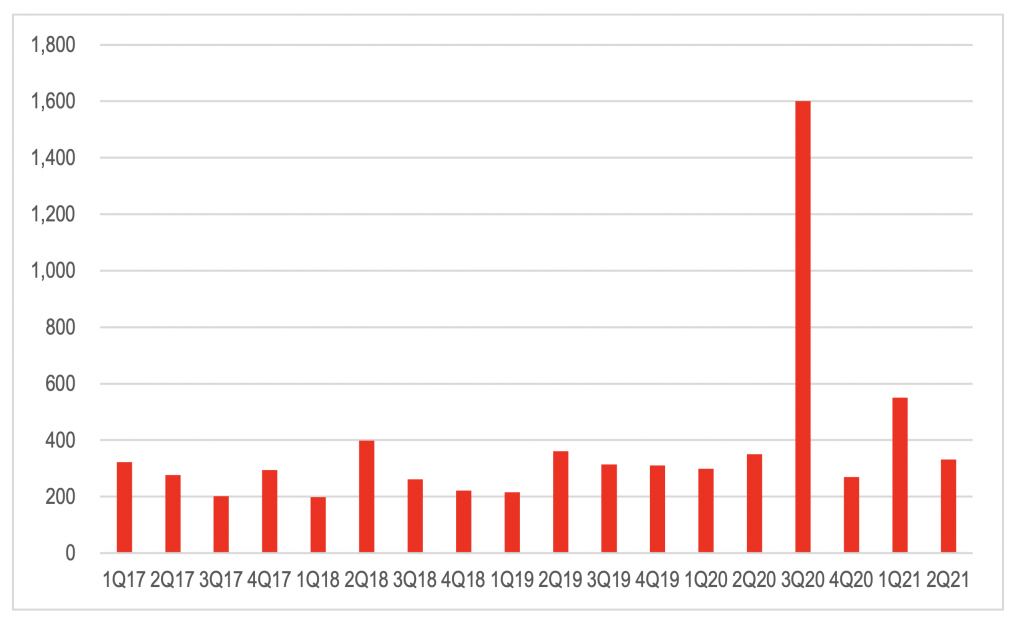 If there is no material increase in impairments, then the collective provision overlay raised in 2020 could be written back with the capital available to be released to shareholders.

This would add to the CBA’s existing excess common tier 1 equity on its balance sheet, with its CET1 ratio increasing to 12.59 per cent at the end of CY20. Additionally, CBA expects this to increase by another 32-42 basis points to as much as 13.0 per cent once the proceeds of announced divestments of CommInsure Life and Colonial First State are received.

This highlights the driver of the improved performance of the banks over the last few months as the market has shifted from expecting the banks to continue increasing their level of provisioning on the back of growing bad debts resulting from the recession. This initially changed to incorporate the view that the collective provision overlays raised in mid CY20 would be enough to cover bad debts resulting from the recession. This resulted in increased confidence that the banks would be able to resume or increase dividend payments in the near term.

With credit and economic performance in Australia and New Zealand continuing to surprise to upside, the market is now starting to believe that the banks could write back the collective provision overlays and return excess equity capital to shareholders.

If we look at consensus sell side expectations for the amount of equity CBA will return to shareholders between FY21 and FY23, we can see that there has been a material increase between the release of the FY20 result on 12 August 2020 and the release of the 1H21 result on 10 February 2021 as shown in the chart below.

Figure 3: CBA Forecast Capital Per Share to Returned to Shareholders – FY21 to FY23

The chart shows that not only have sell side analyst forecasts for dividends increased from A$9.12 to A$10.91 on average, forecasts now incorporate around A$4.63 per share of capital returned through buy backs. This implies a 70 per cent increase in the amount of capital expected to be returned to shareholders over the next 3 years.

This comes on the back of a step up in earnings per share forecasts. 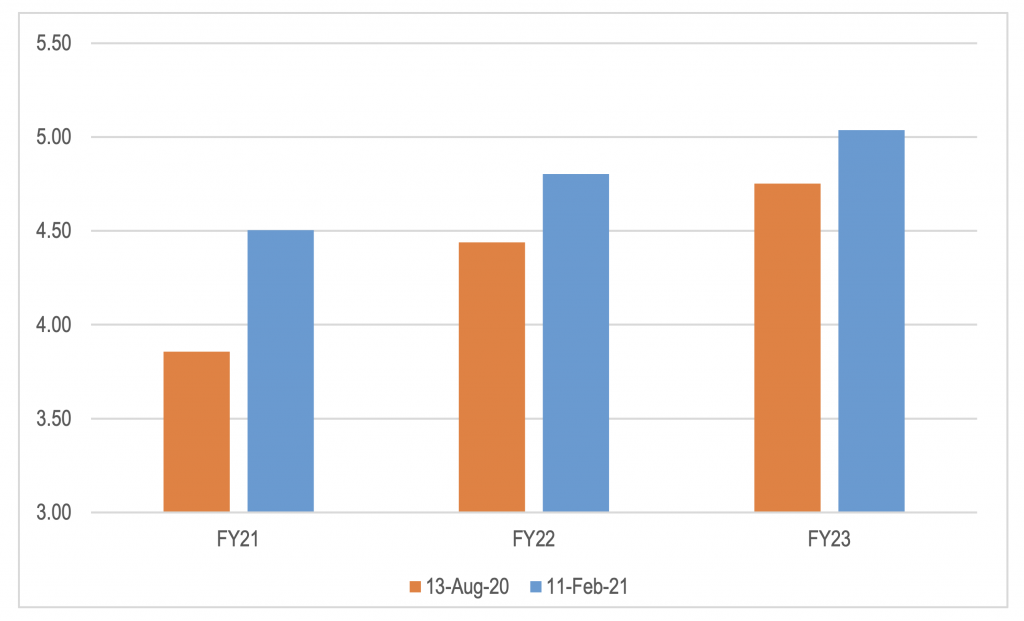 The increase in EPS forecasts is largely due to a reduction in bad and doubtful debt charge assumptions. 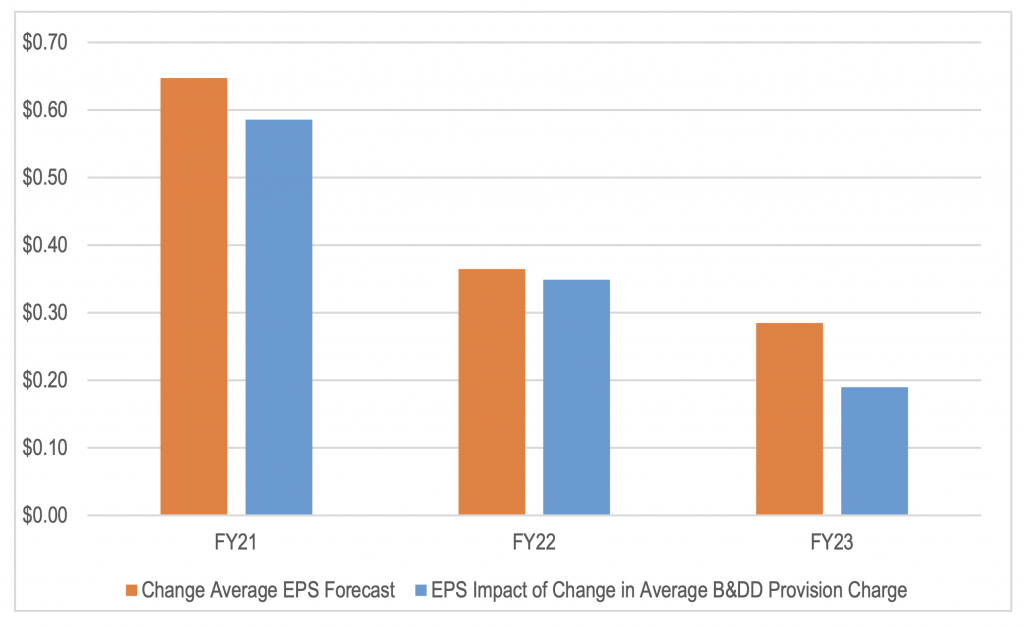 This implies that sell side analysts are generally sceptical that the positive surprise from the result on the revenue line can be sustained as stronger revenue growth in future periods and that the stronger performance of the bank stocks is more a function of the increased probability of greater capital flows to shareholders.