The future of transportation

The future of transportation

One theme that we’re paying particular attention to at Montgomery is the prospect of autonomous cars – once thought as an unlikely futuristic scenario, it now appears that at least in the next 30 years this technology will become widely available.

What is an autonomous car? Simply a car with the ability for a vehicle to drive itself, hence a consumer could summon an autonomous car via an app on their smartphone from a particular company to move from point A to point B (this is known as Transport as a Service or “TaaS” for short).

It’s quite apparent that autonomous cars will have a significant impact on many listed companies since the need to own a car outright is reduced. Hence when valuing these companies, due consideration must be made for this theme.

The end goal of autonomy is where cars can drive themselves automatically to many different destinations. However there are steps between where technology is now to where it’s expected to go which also have implications for valuation.

The below infographic is helpful when trying to understand the various stages. 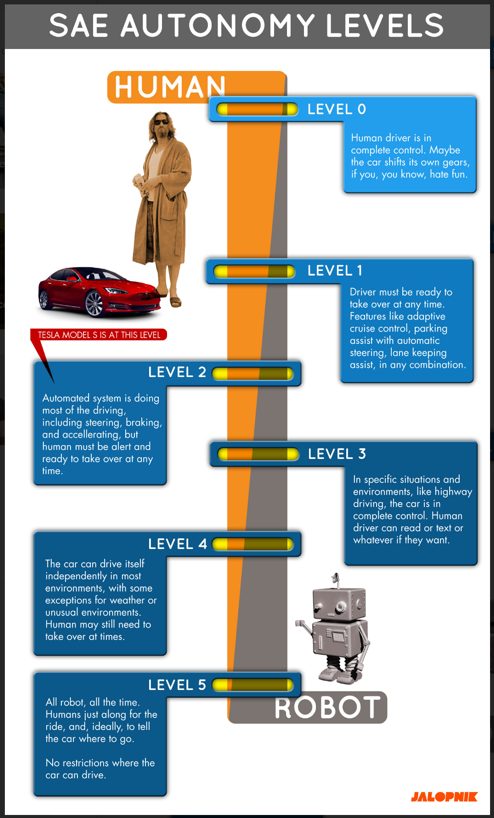 Notably, full level 5 autonomy is not necessarily required for TaaS to have a large impact on the market.  Level 4 would be sufficient for metro areas where the infrastructure is good and streets are well ‘data-ised’ (i.e. the features of the streets have been recorded in a data base). Google has developed Waymo which appears to have this level of functionality (although is still being subject to testing which will be ongoing for many years to come).

Obviously for companies which do profit from the sale of cars or car parts/service there will be downside risk. However there are silver linings too. According to moneysmart.gov.au, Australians spend $78.4 billion annually on cars and average $193 per week on transport costs. The removal of a significant part of these costs will naturally create a boost in spending in other parts of the economy – most likely the consumer discretionary sector.

The Montgomery funds are currently looking for opportunities around this theme and we’ll have more to discuss on the blog in future – stay tuned!

Autonomous cars will have a significant impact on many listed companies since the need to own a car outright is reduced. Hence when valuing these companies, due consideration must be made for this theme. Click To Tweet

You are reading an article about: Manufacturing, Technology & Telecommunications