Some encouraging updates from Avita Medical

Some encouraging updates from Avita Medical

If you are a longer-term shareholder of Avita Medical (ASX:AVH), it is likely you would have experienced a rather disappointing journey over the past 12 months. COVID-19 and lockdowns in the US have stymied the RECELL roll-out just as it was gaining steam, as well as preventing recruitment for its various label extension plays in vitiligo, paediatric scalds and wound care.

Price-agnostic index selling in October, a cash-burning business combined with a surprise capital raising in February that helped killed short-term price momentum, topped off by an uninspiring share price chart and it was relatively easy to paint a negative picture.

(Somewhat ironically, during its meteoric rise in the December 2019 half, Avita was a cash-burning business with a larger-than-expected capital raising but with significantly less sales. The difference between 2019 and 2021 – price-agnostic index buying and an inspiring share price chart!)

It has also been by far the biggest detractor for The Montgomery Fund over FY21, after being the biggest positive contributor in the first approximately 12 months of our investment.

Throughout this entire period, we have continuously retested our thesis to justify our investment. One of the key pillars has been RECELL eventually becoming the “standard of care” in treatment of large burns in the US. While this remains some time away, there have been a couple of encouraging developments in June which we view as positive signposts along the journey.

In June, the company received FDA approval for expanded use of RECELL for pediatric patients. Included in the approval was expanded indication for treatment of full-thickness burns exceeding 50 per cent total body surface area (TBSA).

While we viewed FDA approval as a matter of when – not if – the earlier approval allows Avita to commence sales activities immediately to existing accounts for pediatric burns patients, as well as the handful of pediatric-only accounts. 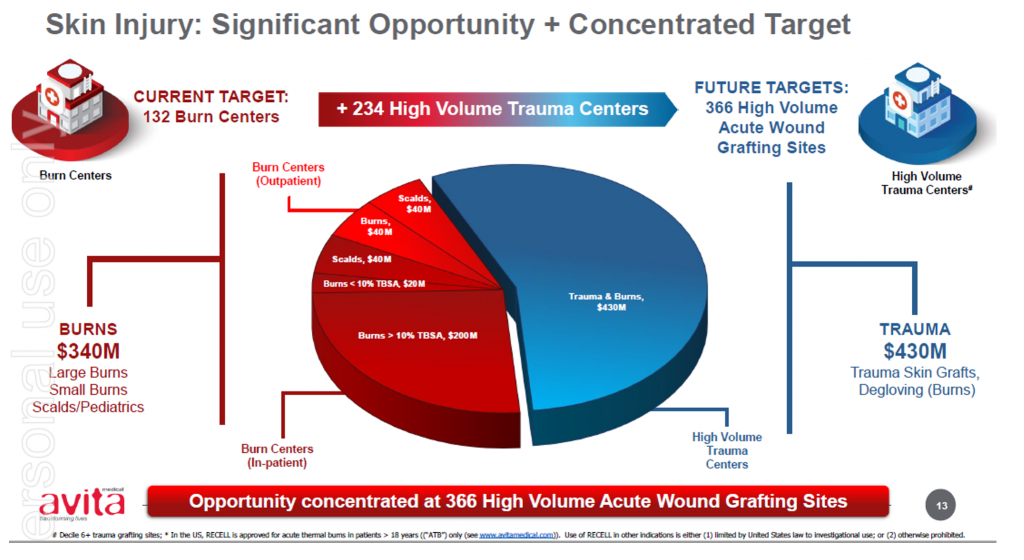 The expanded label expands Avita’s addressable and serviceable market opportunities, which Avita has previously estimated at approximately 25 per cent of US$240 million its initial target market. We understand some accounts had already been using the product off-label on pediatrics given the benefits of the RECELL system underpinned by the large body of evidence and real-world cases.

The expanded label highlights the regulatory barriers to entry enjoyed by RECELL. RECELL has Pre-market approval (PMA), which means the device manufacturer needs to prove both efficacy and safety by providing data showing the device’s performance in humans. A recent Harvard study showed total expected out of pocket costs of > US$500m to develop a Complex Medical Device for the U.S Market – once adjusted for probability of success and failure – given failure rates and cost of non-clinical and clinical studies.

This is different to a 510(k) designation, where the manufactures must “demonstrate only that these devices have the same intended use and are substantially equivalent to similar legally marketed devices”.

Given the large and growing body of evidence underpinning the benefits of the RECELL device in donor skin sparing, scarring and time to healing (and hence costs), we believe this is another key step in RECELL’s journey in becoming the standard of care vs traditional grafting over time.

In Mid-June, Avita also updated it sales guidance for the quarter, lifting its sales guidance from US$8.2 – 8.6 million to US$9.5- $9.7 million. The upgraded guidance consists of an increase in commercial revenue of around US$1 million or 20 per cent (from US$5 to 5.3 million to US$6 to 6.2 million).

We understand the upgrade in guidance reflects both an increase in movement in the US – which unfortunately has led to greater burns incidents – as well normalisation of activity as the US “exits” the pandemic given its advanced vaccination programs relative to other regions.

While the take-up is significantly slower than we had originally anticipated in 2019 given the positive early feedback we received from Key Opinion Leaders (KOL) and those involved with the original trials, there are two factors that we had not accounted for:

As higher TBSA burns patients can be relatively uncommon, this has obvious implications for the pace of adoption beyond the general reticence in adopting innovation given skin-grafting remains a viable option.

For RECELL, we understand the natural progression of adoption starts with deeper burns where RECELL used is in conjunction with meshed autograph, and progresses toward smaller wounds where RECELL is promoted stand-alone. As the incident rate for large burns can be quite rare, we expect a greater focus from the company’s reps on targeting training for smaller burns given the higher volumes (note a 10 per cent TBSA burn is still relatively large and is considered the size of a limb).

With the burns business now cash-flow positive on a direct costing basis, we anticipate improved sales should help the company fund its various label-extension opportunities in vitiligo and soft tissue and alleviate some concern around the company’s level of cash burn (which we note is an investment for future revenue growth).

We remain optimistic the company will expand its addressable markets through both label extension and geographic expansion given the extensive evidence of real-world cases in its targeted indications, while also growing its current burns business for years to come.

The Montgomery Funds own shares in Avita Medical. This article was prepared 29 June with the information we have today, and our view may change. It does not constitute formal advice or professional investment advice. If you wish to trade Avita Medical you should seek financial advice.

You are reading an article about: Companies, Health Care, Stocks We Like