Many high-profile US tech companies – like Uber, Pinterest and Lyft – are about to see the expiry of their share lockups, which are akin to our escrows. If the past is anything to go by, this should lead to some precipitous share price falls.

In Australia we refer to ‘escrows,’ and in the US they talk of ‘lockups’.  That period of time that company founders and key execs are prohibited from selling their shares.

Escrows or lockups are designed to reduce the incidence of founders and insiders winning at the expense of less informed outside investors.

In the US, lockups also restrict the amount of ‘free float’ stock available helping to deliver larger IPO ‘pops’.  A recent example is Zoom Video Communications, which almost tripled from its IPO price of US$36 to over US$102 by June this year, with only 7.5 per cent of Zoom stock available for purchase. Another example is the meat substitute fad’s profitless pinup child Beyond Meat.  Its share price jumped more than six-fold from an IPO price of $US25 to a high of US$169 in June after offering 9.6 million shares of a possible 58 million.

Conversely, investors with a long-term mindset may conclude that giving a founder partial liquidity is a good way to help relieve the pressure of making panicked decisions if all their wealth is tied up in one entity.

So far this year, 25 tech companies have IPO’d raising US$19 billion in the US.  The average gain on listing has been 34 per cent according to Dealogic and they remain 30 per cent higher on average.  Of those 25 companies, less than half can be classed as ‘major tech companies’ and they include Pinterest, Lyft, Uber and Crowdstrike.  But less than 15 per cent of total shares on issue have been released.  In other words, six times as many shares will be available for trading and their owners, many of whom have been locked in for more than five years, will be free to ‘diversify’ (sell).

Personally, I have always been suspicious of founders selling large portions of their holdings – they aren’t likely to be buying them back – especially when their sell-down coincides with a capital raise, an acquisition, merger or some other ‘update.’ A recent example was point-of-sale consumer finance company Afterpay’s founders selling $100 million worth of stock at the same time as announcing a $300 million capital raise.  Mark that one in your calendars!

We have, for some time now been alerting you to our concerns about the stock market prosperity being enjoyed by profitless companies.

Putting aside some of the absurd valuations being traded for some of these companies, and aware that what happens in the US market will have implications locally, it may be worth noting that many technology companies will see their lockups expire from September onwards.  Employees and pre-IPO investors will be permitted to sell their stock and in most, if not all, cases almost all of the stock in the company will be available for sale. 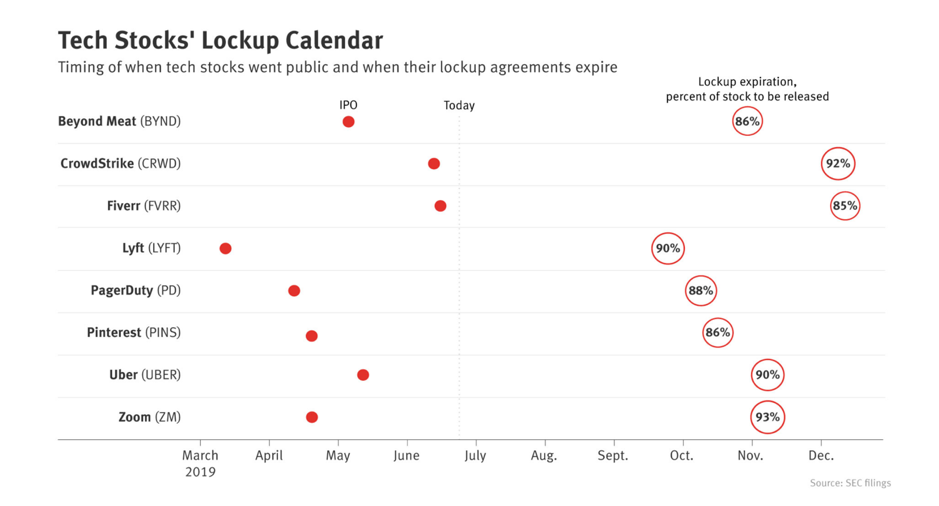 Given the overhang now looming, a lid could be placed on tech company share prices and more volatility could emerge.

When the single product camera company GoPro went public in 2014, its shares almost quadrupled from an IPO price of US$24 to almost US$90 but when the escrows expired the shares began falling and by the end of 2014, they had nearly halved. Today they trade at less than US$6.00.

When snap IPO’d in 2017 its shares surged 60 per cent from US$17 to almost US$30.  When the lockup expired it permitted investors holding 85 per cent of the shares on issue to sell.  Today the shares trade at US$14 having been as low as US$4.99.

With Aussie WAAAX stock earnings multiples even higher than their US counterparts, the coming expiry of US profitless tech company lockups is something to note in the diary.