There are a bunch of reasons to expect this recovery to be longer and more painful than the market’s V-shaped expectations. Of course, within such an environment there will be businesses that do well, and we reckon we own a whole bunch of them in The Montgomery Fund and the Montgomery Small Companies Fund.

Thankfully we also have a lenient mandate when it comes to holding cash, ensuring we also have the ability to preserve capital when prudent.

A slow and halting recovery is something we have been contemplating as we weigh up the arguments put forward by those who believe the recovery will be easy and quick, and those who reside in the slow and halting camp. First let’s look at employment, keeping in mind the retail sector is the second largest employer and the construction industry is the third largest.

As Figure 1 shows there has been a material disruption to the jobs landscape. 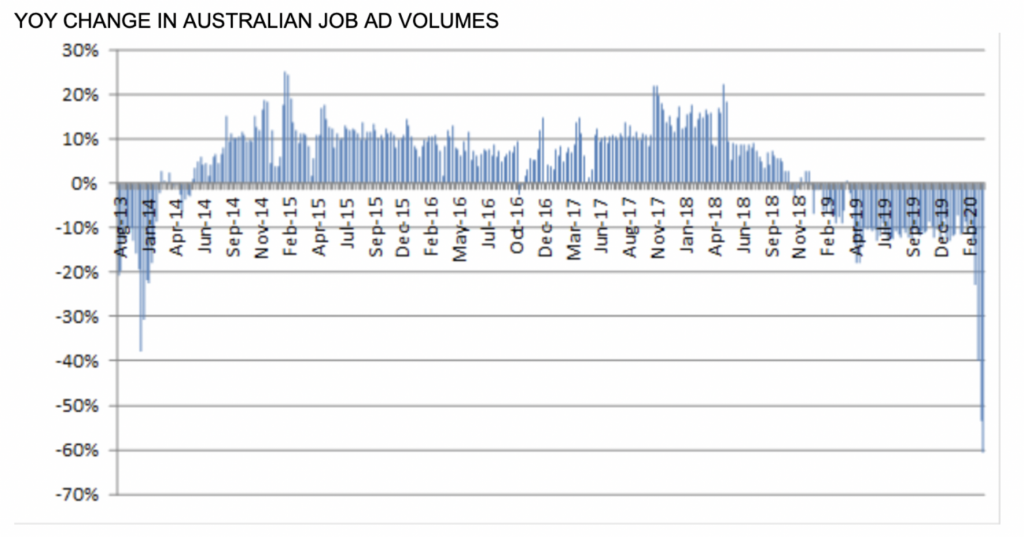 Fewer ads means there are fewer business looking to hire. While April unemployment numbers revealed a jump in unemployment from 5.2 per cent to 6.2 per cent, the fact is that all employees who received the government’s JobKeeper wage subsidy were counted as employed even if they didn’t work any hours! The participation rate fell to its lowest level in sixteen years, from 66 per cent to 63.5 per cent. If the participation rate had remained unchanged, the unemployment rate would be over 10 per cent.

And take a look at what is happening to restaurant businesses in some US states where lockdowns have been unwound completely. 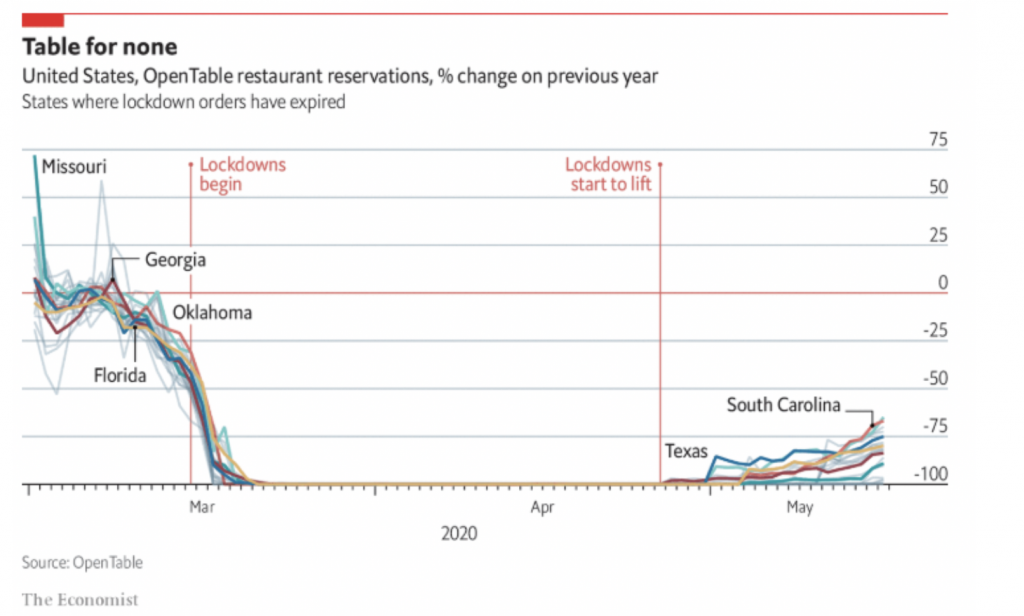 A close look at the chart in Figure 2. reveals restaurant bookings are taking much longer to rebuild than the speed at which they stopped.  Even in states where COVID-19 did relatively little harm (thus far), bookings remain depressed. In Georgia, for example, where restaurants have been open for three weeks, bookings remain 84 per cent lower than their peak. Florida bookings are 80 per cent low, Texas down 75 per cent, and South Carolina, where two weeks have elapsed since stay-at-home orders were lifted, is still 67 per cent weaker.

According to Steve Hafner, the chief executive of OpenTable, as many as a quarter of restaurants in the US will never open their doors again. Profit margins on these businesses are wafer thin thanks to labour and rent so many of those who have lost jobs may find their old job no longer exists.

The read-through for Australian jobs should not be underestimated, and the impact on those job ads (Figure 1.) could mean they remain depressed for some time.

On top of the challenges for hospitality, retail is also doing it tough, and remember retail is the second largest employer in Australia. A conga-line of consumer facing businesses have collapsed this year or are closing a significant number of stores including McWilliam’s Wines, Flight Centre, G-Star, EB Games, Bardot, Curious Planet, Jeanswest, Bose, Kaufland, Colette, Ishka and Kikki K.  And this is on top of those that have collapsed in 2019 and 2018 including Harris Scarfe, Napoleon Perdis, Dimmeys, Ed Harry, TopShop, Gap, Esprit, ToysRUs, Roger David and Shoes of Prey.

Data from city mapper (Figure 3.) and Google (Figure 4.) shows that the number of people in transit, at work, in shops and at parks has jumped spectacularly from the low point in Australia on April 10 when those movements were down 80 per cent from a normal, pre-COVID-19 day. Today the level of those activities is down between 30 and 50 per cent.  Importantly, they have not reverted to normal, and given a higher level of unemployment, may not do so for some time.

Figure 3.  Percentage of people moving in Sydney compared to a pre COVID-19 ‘Normal’ 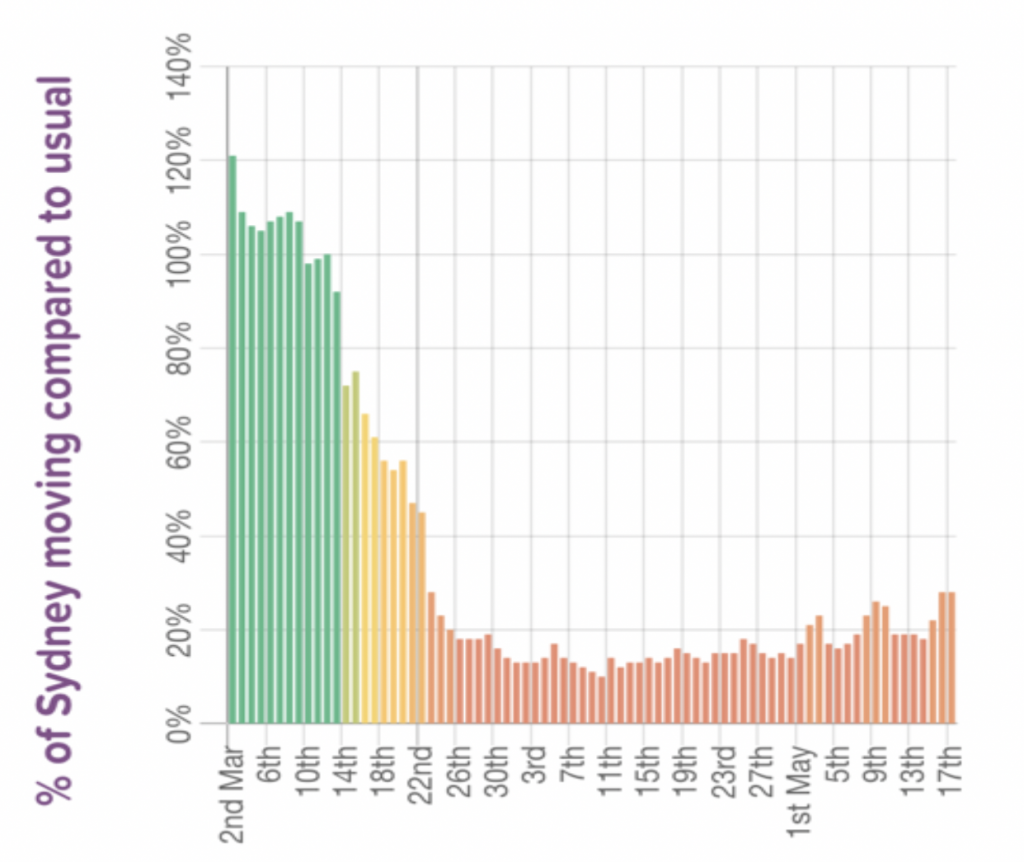 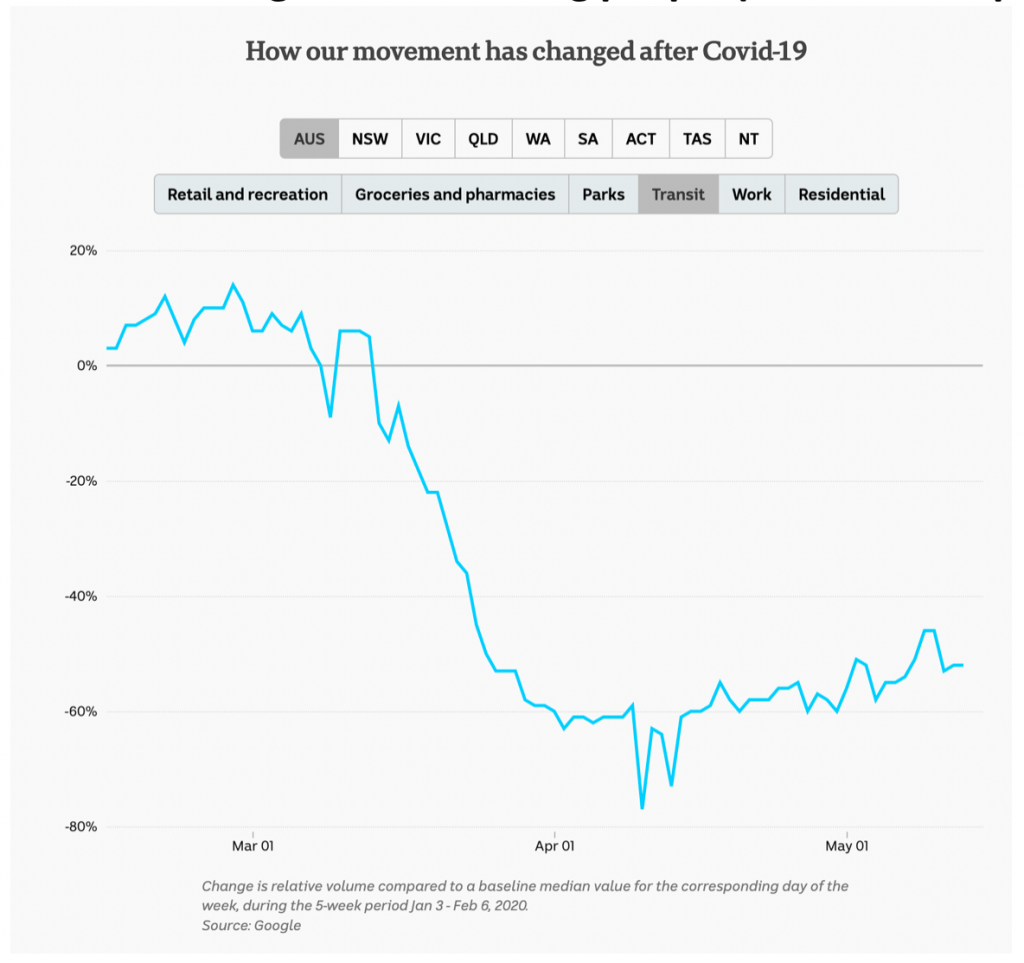 The construction industry is the third largest employment sector in Australia, and a third of its employees are in residential construction. Our channel checks suggest residential builders are experiencing cancellations of up to a third of new home building contracts.

Adding up the situation in retail, hospitality and construction, it looks likely there will be fewer jobs for people to come back to when the JobKeeper payments cease. Jobkeeper payments have been helping support household incomes but the stresses on those incomes from this recession are already being felt. According to bank data, ten per cent of the banks’ mortgage books are already in hardship and that’s on top of the two per cent officially in arrears.

This is occurring while half of the nation’s workforce are on income support through an increased JobSeeker payment or the JobKeeper wage subsidy. But both of these programs terminate after six months, unless the government extends them. Additionally, the eviction bans protecting tenants and the big four’s offer to suspend mortgage repayments for landlords expire at the end of the third quarter of calendar 2020.

Any short-term jump in retail sales as pent up demand is sated amid the plethora of expected seasonal sales will probably as households are forced to manage significant declines in household cash income and still record levels of household debt.

Finally, let’s think about recessions, and particularly their length. If a recovery is defined as a return to pre-crisis incomes, famed economists Carmen Reinhart and Kenneth Rogoff note that it took four year on average to ‘recover’ across the post war crises. Following the Great Depression, it took ten years.  Meanwhile the average length of all global recessions has been 18 months and my read of the 39 US recessions since the 1836 recession, and the beginning of the free banking era, is that they averaged one year and eight months.

It’s a far cry from the six months that the market’s v-shaped recovery is clearly anticipating.

It’s even a far cry from the length of time current business owners are saying they will take to recover (Figure 5.). 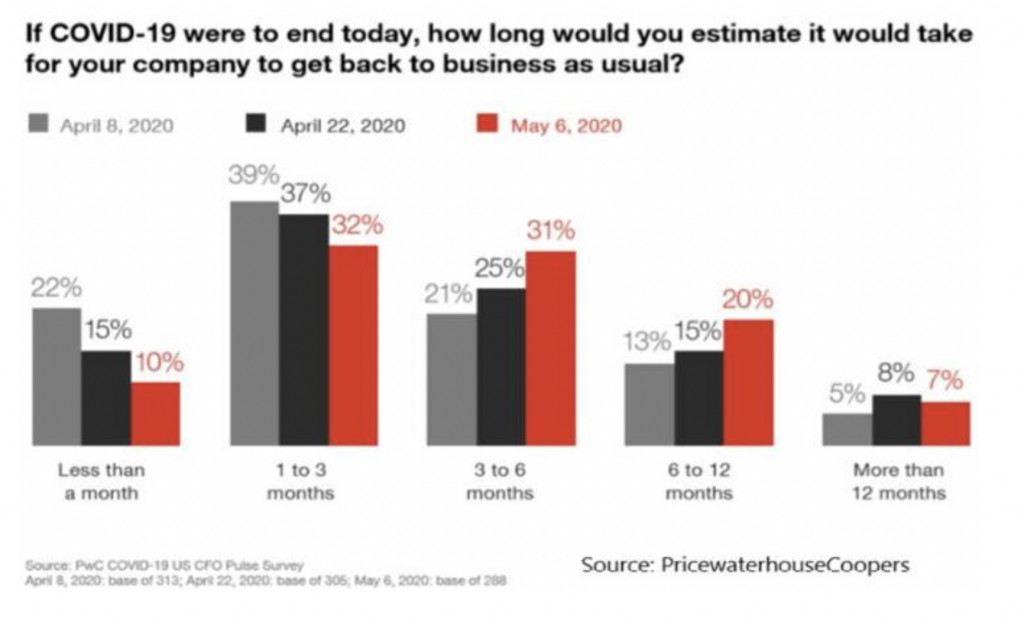 There are some businesses that will do well through this crisis and recession, taking share and attracting a new legion of loyal customers, but there are many more that will suffer. In aggregate it seems the market might be unduly optimistic about the prospects for many businesses and a V-Shaped recovery might be relegated to the same fantasy as rainbow-coloured unicorns.