Investors in Australian slot machine and mobile games developer, Aristocrat Leisure (ASX:ALL), have enjoyed stellar returns over the past 10 years, with the share price up over 500 per cent in that time.  However, its results for the 6 months to the end of March were patchy, and it remains to be seen how strongly the business can emerge from the coronavirus lockdown.

Aristocrat’s bottom line results came in well below market expectations due to lower revenue in the core land-based gaming operations, the impact of fixed cost leverage and a jump in bad debt and legal costs.

Revenue in the land-based business showed a significant impact from venue operators curtailing purchases earlier in the period and as venues closed their doors in North America, revenues from gaming operations falling materially.

Until the shutdowns, the North American business was tracking in line with management’s expectations with gaming operations fee per day increasing 0.9 per cent on the prior corresponding period to US$50.50 per machine per day. But fee per day fell dramatically once casinos started closing. This has continued to deteriorate in April, with fee per day likely to have been negligible. 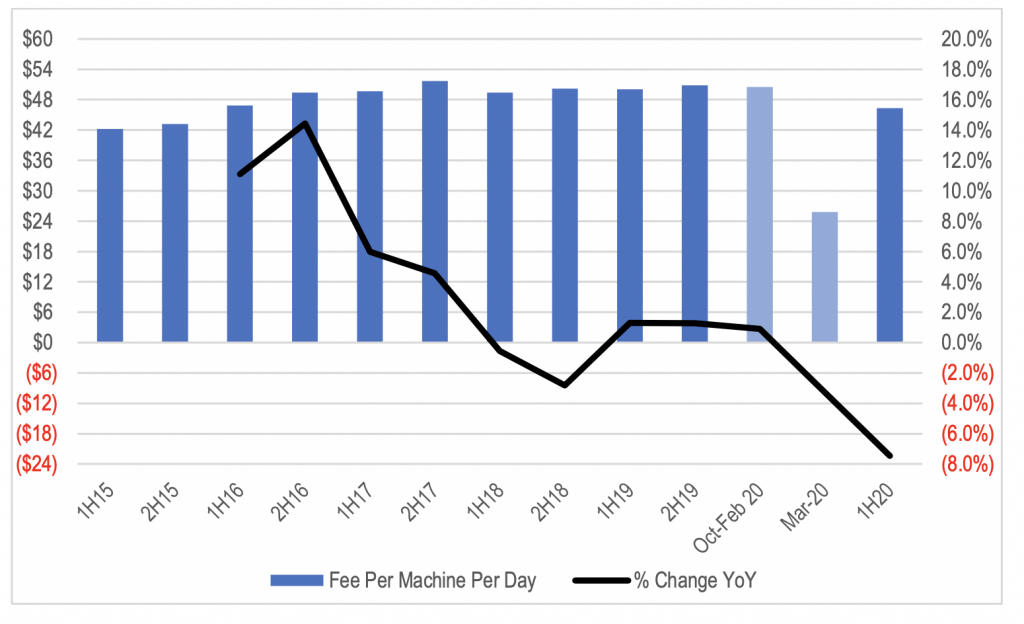 Underlying for-sale unit shipments were also tracking in line with management expectations until COVID-19 began to impact venue orders. With March quarter unit sales tending to be heavily skewed toward the end of the period, the timing of the impact of COVID-19 had a disproportional impact on shipments for the period.

As we move into the second half of the financial year, venues are beginning to reopen. Approximately 20 per cent of venues in Oklahoma, and 2 of 77 venues in California are open, while Nevada is expected to reopen its venues progressively through June. The company provided some positives and negatives regarding the near-term outlook.

On the positive side, management said:

On the negative side:

As a result, we expect casino industry revenue to recover gradually over the medium term. This will constrain the rate of revenue recovery for Aristocrat’s gaming operations business.

The for-sale segment will probably take even longer to recover as venues conserve capital as a result of the stress on their balance sheets from high fixed costs in their businesses.

These issues are now reflected in analyst forecasts with large downgrades to earnings forecasts in FY20 and FY21 being pushed through following the release of the interim results.

The market focused on the performance of the Digital business, which was generally viewed as having a good result.

However, we view the result as highlighting some of the risks and vulnerabilities in this division. The growth in Raid revenue and rate of decline in revenue from legacy games in Social Casual Gaming highlights the exposure of the business to one title. Additionally, the company admitted that Raid is not profitable yet given the User Acquisition (UA) spend being made by the company as the game continues to scale. UA spend increased a whopping 32 per cent in 1H20 over the prior corresponding period to US$202.5 million.

Despite user acquisition spend exceeding the company’s target range of 25-28 per cent of revenue, daily active users declined 8.8 per cent year over year and was down 4 per cent relative to 30 September 2019 to 7.3 million. This implies the legacy base of users is decaying very rapidly. The risk is that this decline forces Aristocrat to cut UA investment in Raid early to support divisional profitability, or it could limit the division’s ability to launch and invest behind new titles.

The offsetting strong growth in average revenue per user was good, but there is a limit to how long this can be expected to be the driver of earnings growth. We view a growing user base with more stable revenue per user as a healthier growth dynamic with a more sustainable growth profile for the business on a long-term basis.

The company noted that it currently has 10 games in varying stages of release. The early signs on the recently released Evermerge title are positive, but we will want to see more progress from the business in terms of growing the overall user base and improved title revenue diversity before this business justifies a higher growth valuation rating from the market.

The Montgomery Fund and Montgomery [Private] Fund owns shares in Aristocrat Leisure. This article was prepared 27 May with the information we have today, and our view may change. It does not constitute formal advice or professional investment advice. If you wish to trade Aristocrat Leisure you should seek financial advice.