During the depths of the market’s reaction to the Coronavirus outbreak I listened in on company and journalist conference calls and held multiple webinars and Microsoft Teams sessions with clients, planners and brokers.  Quite often I heard comments along the lines of, “this will change the way we live, work and travel forever”.  I am adamant in my belief that humans will revert right back to the way they have always done things, as soon as it safe (or permitted, whichever comes first) to do so.

Take travel for example; many believed travelers will abstain from cruising given the infectious hotbed vessels have apparently become. But I imagine one of the first items to be ticked off the list after being cooped up at home for months will be a holiday.  According to one anecdote we’ve heard, Carnival Cruises offered refunds or a future trip with a $200 credit to spend on board, and almost without exception jilted passengers opted for the future cruise with an extra $200 spending money.

And according to a Credit Suisse survey where consumers were asked about their travel plans and specifically, how quickly they would you jump on a plane for international travel, 25 per cent said immediately, while 75 per cent said within next 6 months. Presumably the numbers will improve when the perceived threat of infection declines. For example, if a vaccine was announced today, you’d expect those numbers to switch with 75 per cent willing to travel immediately.

One friend I spoke with this week, had assumed a protracted lockdown would result in the world’s citizens contemplating the importance of individual relationships and consequently eschew meaningless consumerism. Unfortunately for that dream, recent Australian data published by a division of Accenture reveals not only has consumerism returned with a vengeance, but it never left.

Take a look at the graph in Figure 1., which demonstrates that while spending initially plunged ahead of the crisis, spending bounced back as soon as helicopter money hit consumers’ wallets. The bounced has gained momentum as lockdown begins to ease and further supplements are paid. 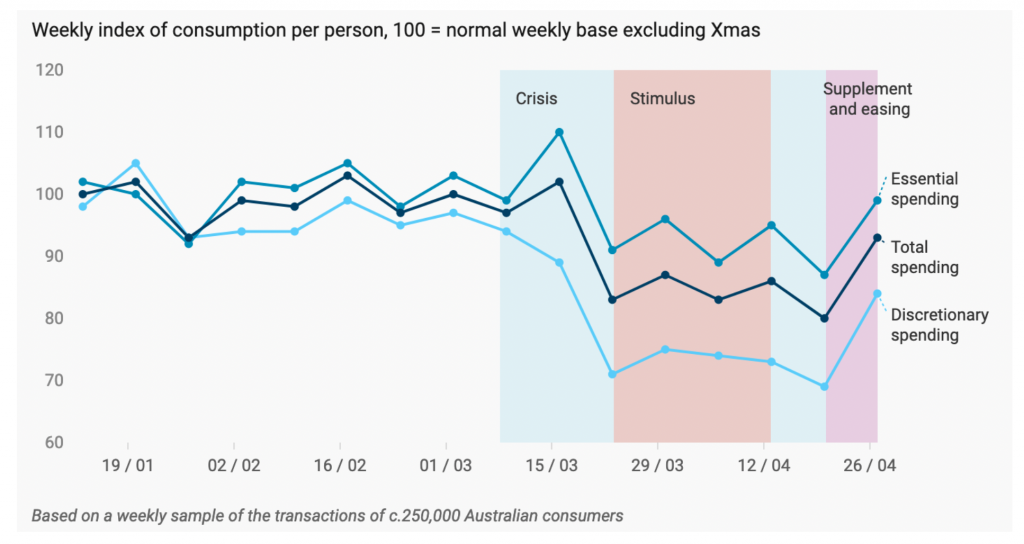 In the week ending last Saturday 9 May 2020 – passers-by were still down 80 per cent year on year (yoy) but up 61 per cent on the previous week.

As of last week, only 48 per cent of stores tracked had reopened, but despite this, POS sales were up 47 per cent week on week, and still down 51 per cent yoy.

So it appears that foot traffic remains depressed but shopping conversion is much better, indicating those out and about aren’t wandering around aimlessly, they’re shopping with purpose.

Some of the recovery is due to lockdown restrictions being eased. This is evidenced by the fact that Victoria data, where the tightest restrictions remain in force, is the weakest.  However it is important to recognize that some of the recovery is due to financial handouts.  What happens when these end only time will tell, but for stores franchises owned by the likes of Adairs (ASX:ADH), Premier (ASX:PMV) and Accent (ASX:AX1) the news is promising.

The analysts at Credit Suisse are assuming wages are 16 per cent below base in May with weakness continuing through June then beginning to recover through the year. They are also assuming a 20 per cent reduction in hours worked through May and June then moderation. But this is partly offset by withdrawals from Superannuation which amounted to $4 billion in April and $4 billion in May according to APRA. When all combined it equates to about a nine per cent reduction in household income over May to June, and Credit Suisse are assuming the declines will then moderate to five per cent before normalizing.

Overall, they expect a satisfying bounce back in consumption as stores open over May and June. They are expecting a lot of promotional activity with June being a big month for sales. Beyond that the sustainability of the recovery will depend on income levels which are likely to remain subdued over rest of year.

For a more detailed insight into how various sectors have been affected, Accenture have provided the data-picture shown in Figure 2. Note the data is to 27 April 2020. 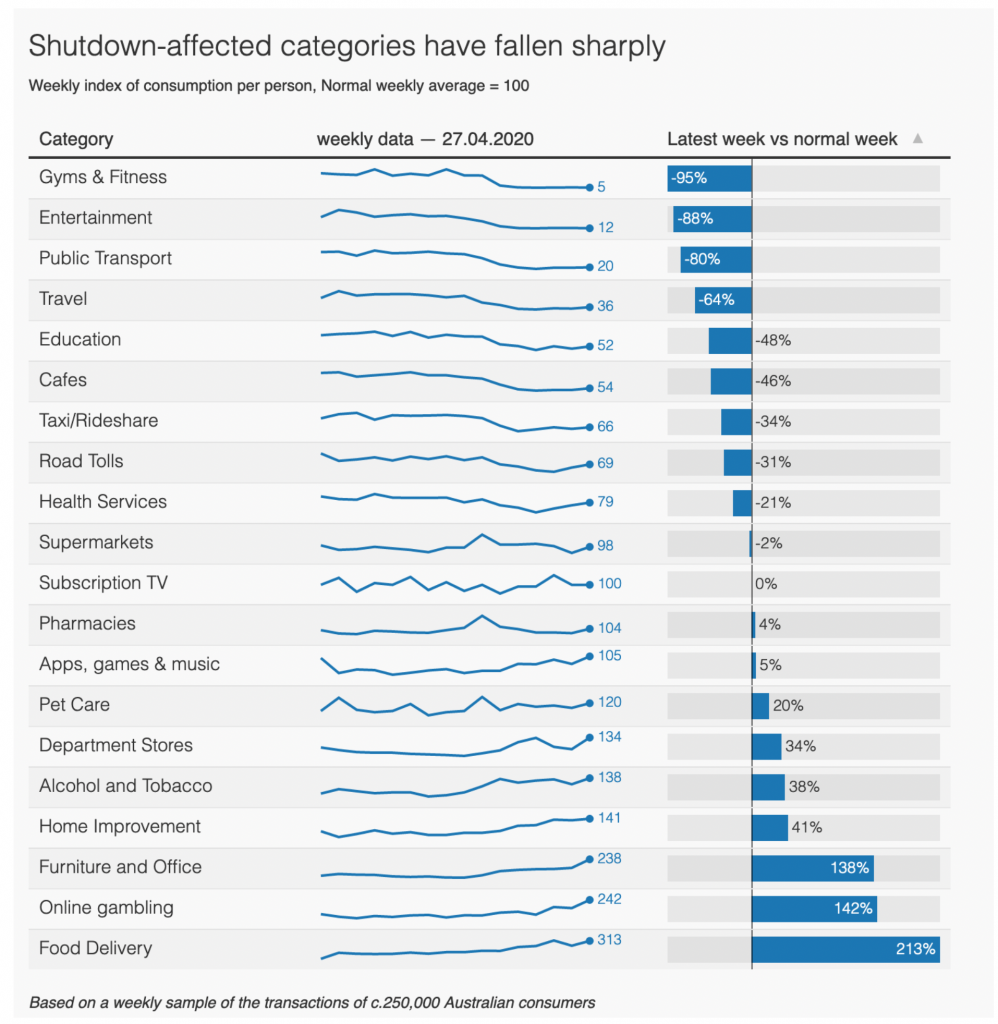