Two recent news items on the problems besetting China’s Evergrande Group tell me that things are going from bad to worse for China’s second largest property developer. And Evergrande’s woes are not an isolated case – signs of distress are starting to emerge at other Chinese developers too. And that’s bad news for our iron ore miners, as property construction accounts for about 42 per cent of Chinese steel demand.

Two weeks ago I published an article looking at the weakness in Chinese property sales showing sales in China are down close to 50 per cent YoY in January and February. This does not bode well for demand for iron ore.

News that Evergrande Group (3333.HK) requested a trading halt and subsequently said they will not be able to produce an annual report before the deadline of 31 March as their auditors have imposed a lot of “additional audit procedures” due to the deteriorating trading situation. “Additional audit procedures” this close to the deadline means to me that the auditors are not at all comfortable signing off the accounts as a going concern and this looks to be a further deterioration in the company’s prospects.

The second piece of news out was an unspecified lender had seized US$2 billion in cash deposits belonging to its property services subsidiary. This seems to have come as a complete surprise to the company and they have formed a committee to “investigate” the “serious incident.” The property services subsidiary has been considered one of the stronger parts of the group but it seems like they had given a pledge guarantee on behalf of another part of the group and it seems now the banks have decided to take whatever they could get hold of which does not bode well for the prospect of a planned debt restructuring solution which the company is aiming to finalise by July.

The financial health of the property developers

The reason the financial health of a property developer is so important is that Chinese property developers depend on pre-sales of developments to a significant degree to get the working capital to finance construction. With the financial health of developers under question, property buyers are reluctant to take on the counterparty risk as they do not want to find out they will eventually own a part of a half-finished high rise when the developer has run out of money. This reluctance is what we are seeing now and it is of course leading to a negative circle where the lack of new pre-sale inflows means that Evergrande is running out of money to finish the developments under construction. And now the “run” for the company is exemplified by the unnamed banks seizure of the pledged collateral.

Even more worrying is the seizure seems to have come without any communication to the company from the banks. Having worked at a major lender earlier in my career, this indicates to me two things:

These are definitely not good signs for Evergrande and we are seeing more signs of distress in the Chinese property development sector. For example last week Sunac (1918.HK) proposed a delay in their upcoming Rmb 4.0 billion maturing bond repayment indicating they are also suffering cashflow issues.

As a result, in the last few weeks we have seen further weakness in the Chinese property high yield bond index which is now yielding close to 54 per cent as we can see in this chart: 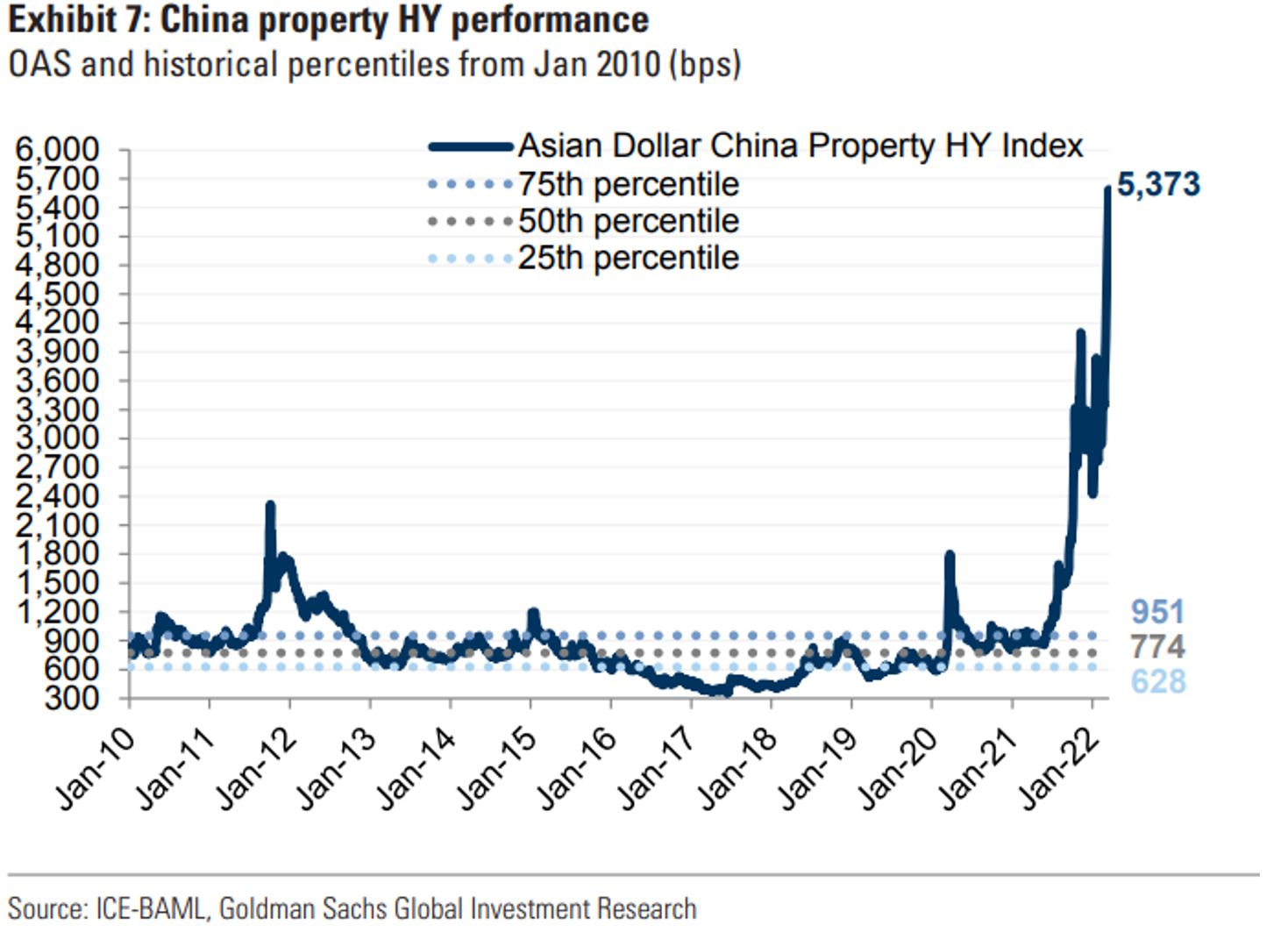 All in all, there is bad news for the Chinese property sector and by extension the seaborn iron ore market.

You are reading an article about: Global markets, Property