It’s Official: Residential Construction is Crashing before our Eyes

It’s Official: Residential Construction is Crashing before our Eyes

Our thesis appears to be playing out. A conversation with one of the owners of the largest residential builders just this week has revealed that the slowdown in construction activity has indeed commenced.

While the story is only anecdotal, it is likely to be repeated more broadly. The particular builder we spoke with was previously constructing between 100 and 120 houses per month. The decline they are seeing in their pipeline is now about 50 per cent.

Unless there is a substantial change to conditions, the decline in their forward book will soon translate to much softer activity for this builder. By Christmas “it falls off a cliff”. This builder is still busy building and completing houses that were ordered 12 and 24 months ago, but by the end of the year the firm will need to start laying off staff.

The slowdown must already be affecting other builders and in turn, contractors and tradies. According to my contact, bricklayers just 12 months ago were impossible to find, and they could name their terms. Today the tables have turned, and my source has been flooded with requests for work by tradies. Just 12 months ago bricklayers were being paid $1.80 per brick but today the price has fallen to $1.40 dollar per brick. This is evidence that the crash goes beyond this one builder’s experience.

The Builder further told me that whether interest rates are at 3.9 per cent or 2.9 per cent won’t make any difference to the level of demand for his product. What matters more is the capacity and ability of the banks to lend and to get borrowers ‘over the line’. That means changing lending criteria and loosening conditions.

To that extent, what APRA, the Reserve Bank of Australia and the Council of Financial Regulators do next will make all the difference. If they do nothing, a full collapse in the housing construction industry is almost assured, with obvious flow-on effects to retail spending and retail property vacancy rates. And remember the retail industry is the second largest employer in Australia.

I suspect it’s one reason the RBA elected not to cut interest rates on Tuesday, 7 May, preferring to keep its powder dry for a much bigger cut later in the year when necessary and when it can have a much bigger impact. Presumably house prices will also be slightly lower then and a cut that spurs housing speculation will push prices of the lower base rather than higher one.

A financially ‘stressed’ household cannot cover ongoing costs from net income, but there’s some flexibility in cash flows. Restricting spending, selling assets and refinancing or restructuring debt are all methods by which households might alleviate the stress, however all efforts have second and third order consequences for either property prices or the broader economy.

A household in ‘severe’ stress is unable to meet repayments from current income and are likely to be forced to liquidate assets.

If the aforementioned collapse of the residential construction industry is not mitigated by easing monetary policy and macro-prudential measures, a reasonable assumption would be that financial stress increases further. 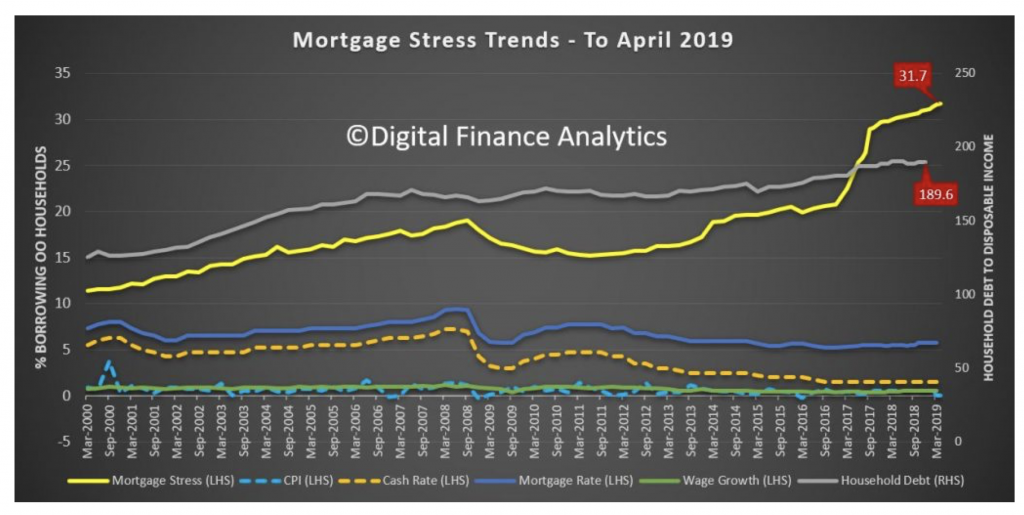 According to DFA, a record 1,050,450 Australian households are now estimated to be in mortgage stress, up from 1,044,666 last month. The figure represents almost a third (31.7 per cent) of owner-occupied borrowing households.

And finally, it seems the Royal Commission’s spotlight may be unintendedly contributing to the level of household stress.

To help alleviate stress, many households are looking to refinance but our sources confirm that dodgy income and/or expense data, first provided to lenders to secure mortgages in 2014-2017, may prevent many from successfully refinancing now.

While more relaxed lending standards could help new borrowers to put a floor under property prices, the only way out for many existing borrowers may be much lower interest rates or a forced asset sale.

A builder we spoke with was previously constructing between 100 and 120 houses per month. The decline they are seeing in their pipeline is now about 50 per cent. Click To Tweet
MORE BY RogerINVEST WITH MONTGOMERY