Is margin pressure an ongoing issue for the health insurance industry?

Is margin pressure an ongoing issue for the health insurance industry?

The market has viewed the private health insurers as one of the biggest winners from this month’s Federal Election. This is due to the market having factored in the likely impact of Labor’s stated policy of limiting average policy premium increases to 2 per cent on 1 April 2020 and 2021. With this risk having been removed from the outlook, the share prices of Medibank Private (ASX:MPL) and NIB (ASX:NHF) have increased around 14 per cent since the election.

But the removal of Labor’s premium growth cap from the agenda does not mean the private health insurers no longer face margin pressure. In reality, the combined pressures of the ageing population, wealth effects on healthcare demand, the community rating system, and affordability will keep industry margins under pressure going forward, even without the artificial cap on pricing growth. 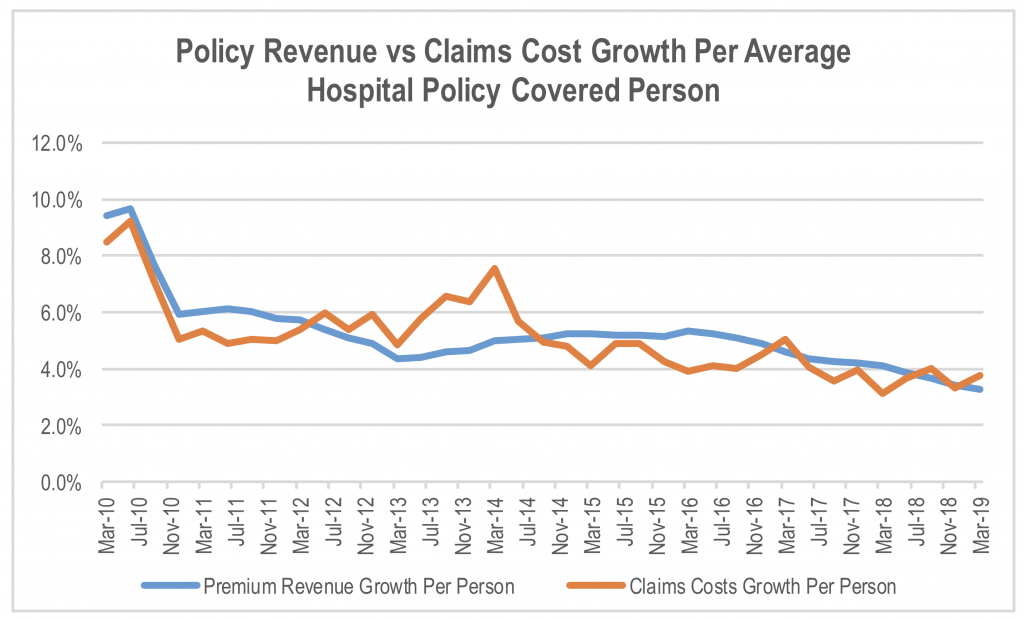 Looking at the drivers of the claims cost growth per covered person, we can break it into a few factors. First there is the average claims cost per policy by age demographic and the way that the ageing population, combined with the pricing of policies under the community rating system is driving a shift in the mix of covered people away from lower claiming younger demographics toward significantly higher claims cost older people. 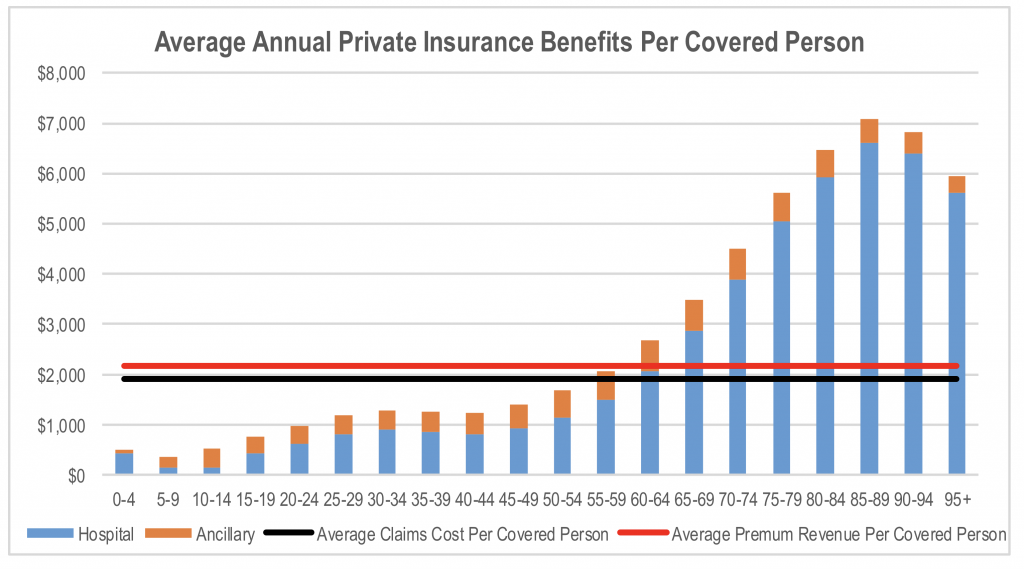 The chart above shows that the average claims cost paid by the private health insurance industry per covered person in the year to March 2019 was just under A$2,000. Because the insurers cannot vary premiums for a given set of hospital and general ancillary policy coverage due to risk factors like the age of the covered person (community rating), policies are effectively priced on the basis of the expected claims cost for all covered persons under that policy.

This means that on average people aged over 60 will incur more claims costs than the average premium paid per covered person. The gap becomes particularly significant for people aged above 74. The higher cost of older people is shared across the insurers through the risk equalisation mechanism, but as an industry, the private health insurance industry loses money on older policyholders. These losses from older policyholders need to be cross subsidised by larger profits on younger lower claiming policies.

The problem is that this makes private health insurance relatively unattractive to younger people. As a result, they are increasingly dropping or downgrading cover, adding to the impact on demographic mix from the natural ageing of the Australian population.

The chart below shows the year-on-year change in the number of people covered by hospital insurance policies by age demographic.

The growth in the number of covered persons has slowed for all of the age based demographic ranges, but all of the demographics under 65 are now shrinking, with the largest decline in the 20 to 29 age group. As shown above, this is a low claims cost demographic. The number of policyholders aged over 64 continues to grow, which makes sense given the economic benefit of paying an average of A$2,150 per person in premiums for an average claims cost benefit of between A$3,500 and A$7,000 a year.

This rotation of policyholders toward older people is adding 1-1.5 per cent to annual claims cost inflation for the overall industry.

The weighted average claims cost increase adjusted for the shift in age demographic mix of policies was around 2.5 per cent, but this is still above the current rate of consumer price inflation across the broader economy. This is because the average number of hospital treatments per policyholder at each age demographic is also increasing. This is the result of increasing population wealth, and improved medical treatments. This was a particularly material driver of claims cost growth up until June 2017. In the last two years, the number of episodes per policyholder has remained reasonably flat, reducing claims cost inflation and allowing the insurers to reduce their annual premium increases to some degree.

Federal Government reforms in areas such as prosthetics pricing have also helped to reduce claims cost inflation. However, in the longer term the impact of the ageing population and the increasingly unattractive economic proposition offered by private health insurance to younger people on claims cost growth is unlikely to change in the foreseeable future.

As a result, claims cost pressure is likely to remain in the absence of further material reforms in the system. This has been the focus of the Minister for Health, which is a positive, but Mr Hunt has reiterated a view that premium growth needs to remain at or below this year’s 3 per cent industry average premium increase. Therefore, margin pressure is likely to be an ongoing factor for the health insurance industry.

From a competitive perspective, it will be imperative for companies to be able to improve their own internal productivity and the efficiency of their healthcare provision systems. This will require investment in systems infrastructure and capabilities. Having gone through a massive overhaul of its IT infrastructure over the last few years, Medibank is in a strong position to improve its productivity and product capabilities relative to the broader industry. The company has already announced a A$60 million cost reduction programme, with A$40 million to be delivered by the end of June 2019 and the residual A$20 million in FY20. Management has also indicated that it will announce further cost reduction initiatives at the FY19 result release in August. This will further strengthen its competitive advantages, putting it in a strong position to leverage its scale and create a gap to its competitors in its product offering.

The Montgomery Funds own shares in Medibank Private. This article was prepared 29 May with the information we have today, and our view may change. It does not constitute formal advice or professional investment advice. If you wish to trade Medibank Private you should seek financial advice.

You are reading an article about: Companies, Health Care, Insurance