Is China’s Economy Going to Hell in a Handbasket?

Is China’s Economy Going to Hell in a Handbasket?

In February of 2019, China’s exports declined by an enormous 20.7 per cent year-on-year – a terrifying drop. What conclusion would you draw from this data point?

While it’s tempting to conclude that China’s exports falling by a fifth is a harbinger of the Chinese economy falling by the wayside, there’s more to this data point than meets the eye. It is worth noting that key holidays in China are determined by the lunar calendar, as opposed to the solar calendar used in the West. The key difference between these two calendar types is the celestial body used to measure the passage of time – in the case of the lunar calendar, it’s the phases of the moon; the solar calendar uses the time taken for the earth to rotate around the sun as one year.

Why is this relevant? Well, it happens that the first day of Chinese New Year falls on the new moon that appears between 21 January and 20 February. Chinese New Year is a major holiday in China, with many people taking time off to celebrate with family. In the context of broader economic activity levels within the Chinese economy, the timing of Chinese New Year can introduce significant distortions to year-on-year growth figures.

For example, in 2019 the Chinese New Year fell on February 5, meaning that the bulk of the impact from the holiday slowdown was registered in January and February. However, in 2018, the Year of the Dog, the lunar new year celebration fell on February 16, amongst the latest dates over the last decade for Chinese New Year to begin. What this means is that the 2018 holiday timing saw a lot of the impact pushed into March; a corollary of this is that the February economic growth figures were relatively less affected in 2018.

Following this logic, we need to view the sharp 2019 exports fall in the context of the tough 2018 comparison period. Put simply, 2019 activity was less strong due to the timing of Chinese New Year, and we are comparing the 2019 export number to the 2018 figure, which was relatively less affected by the holiday slowdown. When investing, it’s critical to understand and be cognisant of factors that may either boost or depress year-on-year growth percentages, and to make any necessary adjustments.

In the case of the February 2019 China export growth decline, it might make more sense to look at a two-year compound annual growth rate (CAGR) to incorporate the stronger prior period growth. Or it could also make sense to use January and February combined for 2019, and compare this to the comparable 2018 period. The graph below maps this, and shows a much smaller decline in Chinese exports. 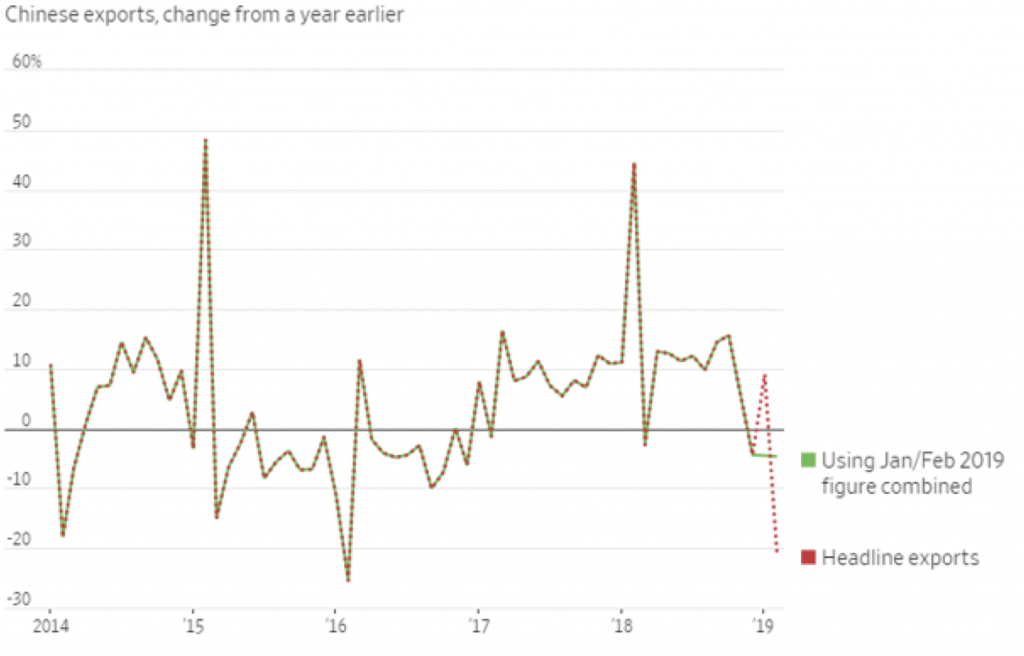 While the data still suggests a slowdown, the decline is likely nowhere near as severe as the headline figure suggests. It is always worth paying attention to any factors that may distort year-on-year growth figures to avoid drawing incorrect conclusions from data points.