Eastern Europe – the epicenter of our next crisis? 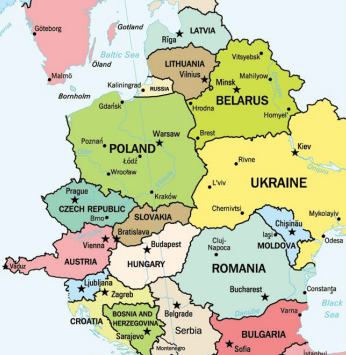 Eastern Europe – the epicenter of our next crisis?

It’s official. European consumer prices fell an annual 0.2 per cent in December 2014. German five-year bonds and Swiss ten-year bonds are now paying a “negative rate of interest.” European Central Bank (ECB) president Mario Draghi continues to “do whatever it takes” with last week’s announcement of the 1,100 billion euro (US$1,250 billion) bond purchase program over 2015 and 2016. Mario thinks this will steer the Euro area away from deflation by convincing investors his latest strategy is audacious enough to stimulate their relatively fragile economy.

With the plunging oil price and the hard left Syriza Party taking government in Greece this week, Greece’s repayment schedule and austerity program is being questioned. Mario seems a little bit trapped, given the average ten-year sovereign bond yield for France, Germany, Italy, Portugal, Spain and The Netherlands is currently 1.15 per cent, well below the US ten-year bond yield of 1.7 per cent. While Mario thinks the lower the bond yield for these major economies, the better the outlook, all that seems to be happening is the decline of the Euro/ US dollar exchange rate to an eleven year low. This is after six years of Quantitative Easing, may as well make it eight years!

Academics Carmen Reinhart and Kenneth Rogoff claim that if a country’s external debt to GDP ratio exceeds 30 per cent, there is a material risk of a credit default. Based on information from Joint External Debt Hub (www.jedh.org), there are 25 countries believed to exceed this ratio. Interestingly, 19 of them are based in Eastern or Southern Europe, with Greece easily winning the gold medal with a gross external debt to GDP ratio of 210 per cent.

Any crisis in Eastern Europe will have negative ramifications for the European Union. Countries like Romania, Ukraine, Poland, Belarus and Turkey have a combination of high current account deficits and high external indebtedness. Also, any exchange rate devaluation would increase pressure to service more foreign currency debt, not unlike the Swiss Loans, which was pumped into Aussie farmers in the mid-1980s. At least the external debt of Greece, Latvia, Slovenia, Estonia and Slovakia is predominantly denominated in Euro.

Meanwhile, the Russian Federation is suffering from the oil price crash and international sanctions. Moody’s Investors Services just lowered Russia to Baa3, the lowest investment grade and Standard & Poor’s has just cut their sovereign credit rating to junk. Currently one in every five distressed corporate bonds worldwide originates from Russia, and with the central bank hiking the cash rate from 10.5 per cent to 17.0 per cent in late-2014, the sixth increase in a year, it appears a serious recession in 2015 is likely.

Furthermore, the tension between the Ukraine and Russia and the threat to bypass the Ukraine for Russia’s gas exports, which supplies around one-third of Europe’s needs, is escalating.

Finally, back to the European Central Bank president Mario and the audacious 1,100 billion Euro package to be implemented over 2015 and 2016. This package of Quantitative Easing has added some recent enthusiasm to markets. But as we have seen with both Greece and Cyprus in the recent past, this may not prevent default in parts of Eastern Europe, the likely epicenter of our next crisis. Meanwhile, the Athens Stock Exchange General Index declined 9.2 per cent overnight to be down nearly 50 per cent since early 2014.

To learn more about our funds, please click here, or contact me, David Buckland, on 02 8046 5000 or at dbuckland@montinvest.com

You are reading an article about: Foreign Currency, Insightful Insights