Earnings announcements provide some fuel for the optimists

Earnings announcements provide some fuel for the optimists

Right now, we’re seeing a tug-o-war between investors who think the worst is behind us and those who feel there is more coronavirus induced pain to come. A look at recent corporate earnings announcements gives a slightly clearer picture of the road ahead.

As investors, it is important to form your own view of the future prospects of a company and not to rely on statements from the management of said company as they are in general very optimistic. This optimism is not bad or surprising, as it would be challenging to run a business that you do not fully believe has a bright future, but it means that statements from company management should be taken with a grain of salt!

Saying this, in the shorter term, company management and boards have much better insight into what is going on inside a business than people outside so it is worth taking notice when companies give guidance updates.

At the moment, we are in an unprecedented situation where visibility on what will happen to various sectors of the world economy (and overall society) is probably less than at any point since the outbreak of World War II. It is even more interesting to look at guidance updates, not necessarily for what they say, but to look at the number of companies that do have some kind of visibility into the future and compare to how many have not.

To this extent, I found it interesting to look at the corporate announcements from 20 February when the Australian market reached its peak.

Since then until 30 April, there have been 185 announcements from companies containing statements about their outlook for the rest of the year. From the chart below, we can see that the frequency of statements reached a peak in late March when the government announced a number of tighter lockdown restrictions as well as stimulus packages.

What is even more interesting to me is to look at the nature of the statements and, to that extent, I have in the chart below classified them in the following categories:

In total, 182 of the 185 announcements can be categorised into the above categories with the majority being withdrawals of guidance but with 25 companies reaffirming guidance and one company (Fisher & Paykel, which manufactures ventilators) upgrading guidance. 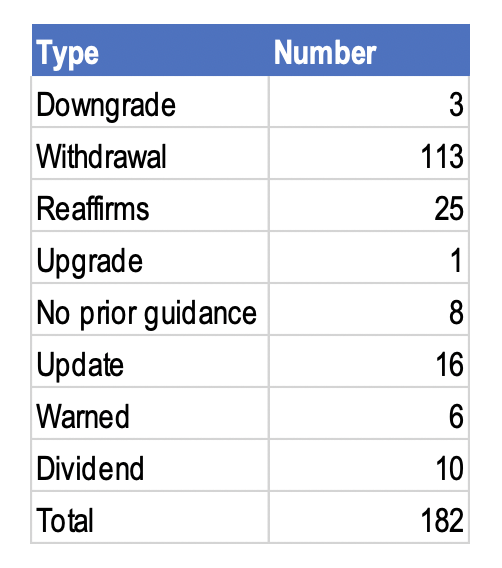 If we look at the distribution of the type of statements over time, we can see that we are recently seeing a shift from companies withdrawing guidance and cutting dividends to either giving updates or to reaffirming previous guidance.

What conclusions do we draw from this?

Given the uncertain situation, it is of course very hard to draw any definite conclusions but it is somewhat positive to see that we are not seeing companies giving incremental negative updates as the recent statements are generally of the type “we still do not know” or “not getting incrementally worse.” We are still early in the evolution of the crisis and although the health risks are now becoming better understood, I am not so sure that the market has fully understood the earnings impact from the lockdowns and the reduced economic activity that has resulted. One thing is certain, most of the companies themselves seem to not know!

No matter what the future directions of corporate earnings will take from here, it is clear that the market is now prepared to pay about the same P/E multiple as before the fall based on the current consensus earnings forecasts as the chart below shows. 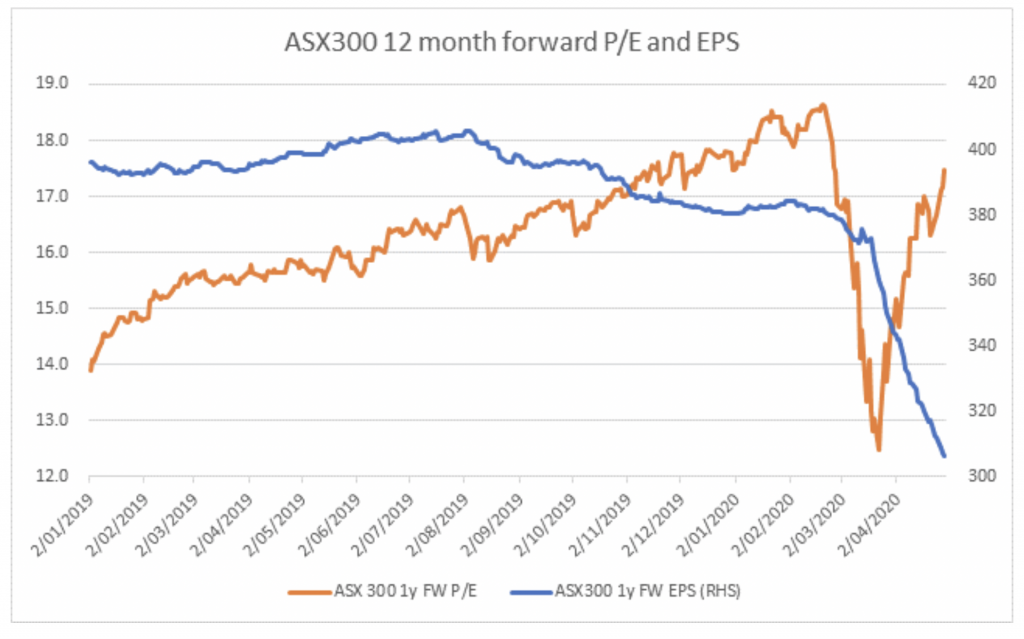