Consumption data signal trouble ahead for many businesses

Consumption data signal trouble ahead for many businesses

JobKeeper has been incredibly important in supporting consumer spending in Australia. But recent data show that spending could be plateauing – even before JobKeeper is wound back. This could signal even worse times ahead for many businesses.

There are some signs of a plateauing of the recovery in Australia. Weekly spending data reported by the Commonwealth Bank of Australia (CBA) and Tyro shows the collapse in spending in March, with the rate of decline year-on-year bottoming in early April as the lockdowns took effect.

The CBA data, which maps spending on cards (either online or in person), has recovered from being down 20% per cent in early April to up 9.8% per cent in the most recent week to 24 July. Note that there has been a material shift away from cash transactions and toward cards as a result of the COVID-19 crisis due to hygiene concerns. Therefore, the current year-over-year growth in spending on cards overstates the rate of growth in spending overall. 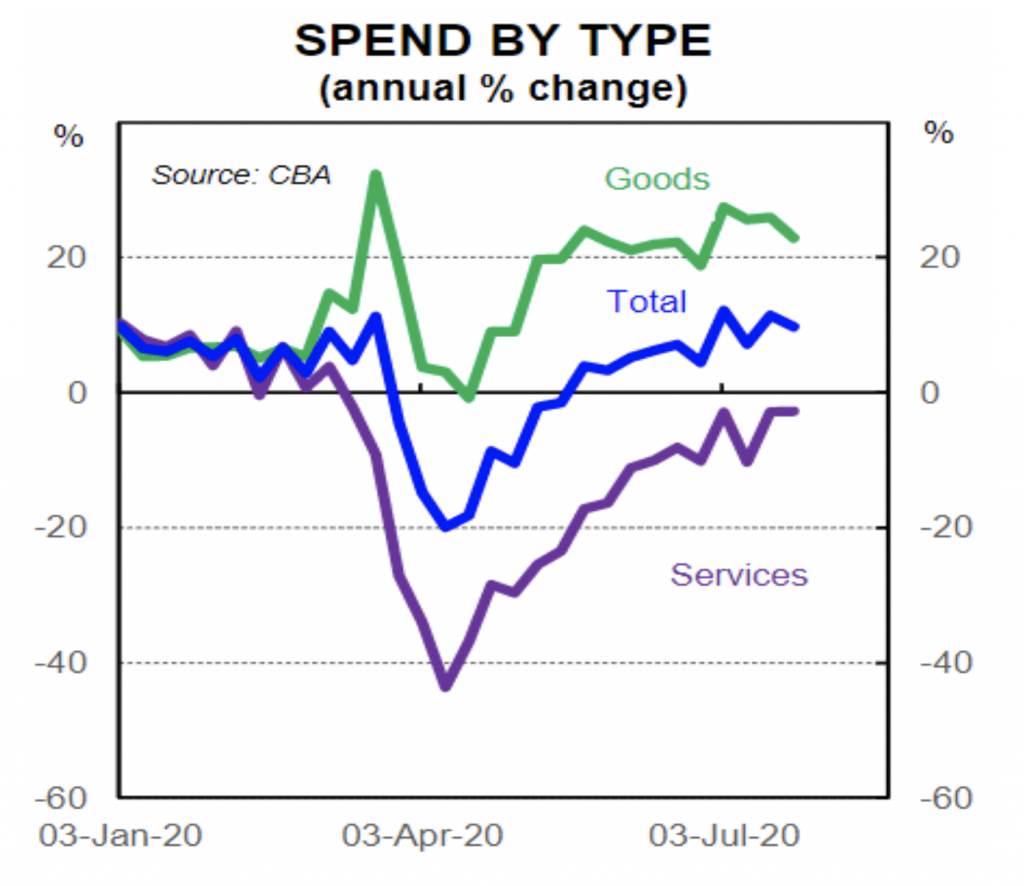 It is also noticeable that the slope of the recovery has flattened considerably in recent weeks. This is also supported by the weekly spending data provided by merchant payments provider Tyro. 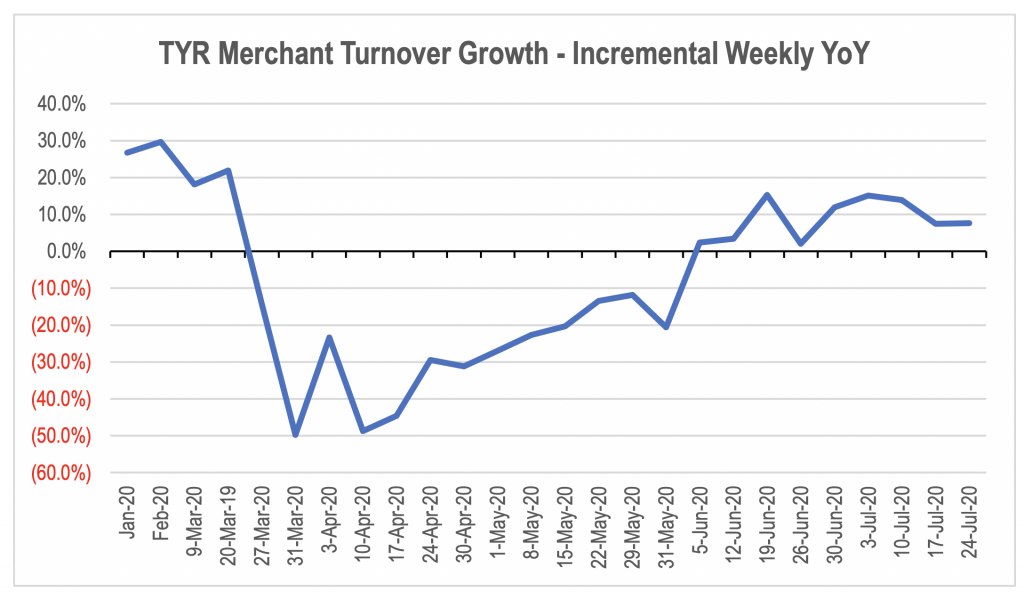 Interestingly, if we compare the shape of the recovery to the SME Sales Index released by SME lender and equipment finance provider GetCapital, the recovery maps the release of JobKeeper payments and their effect in boosting SME sales. The chart shows how significant JobKeeper has been in supporting SME revenue, but it also shows how conditions have already started to deteriorate even before the JobKeeper scheme is to be wound back at the end of September. 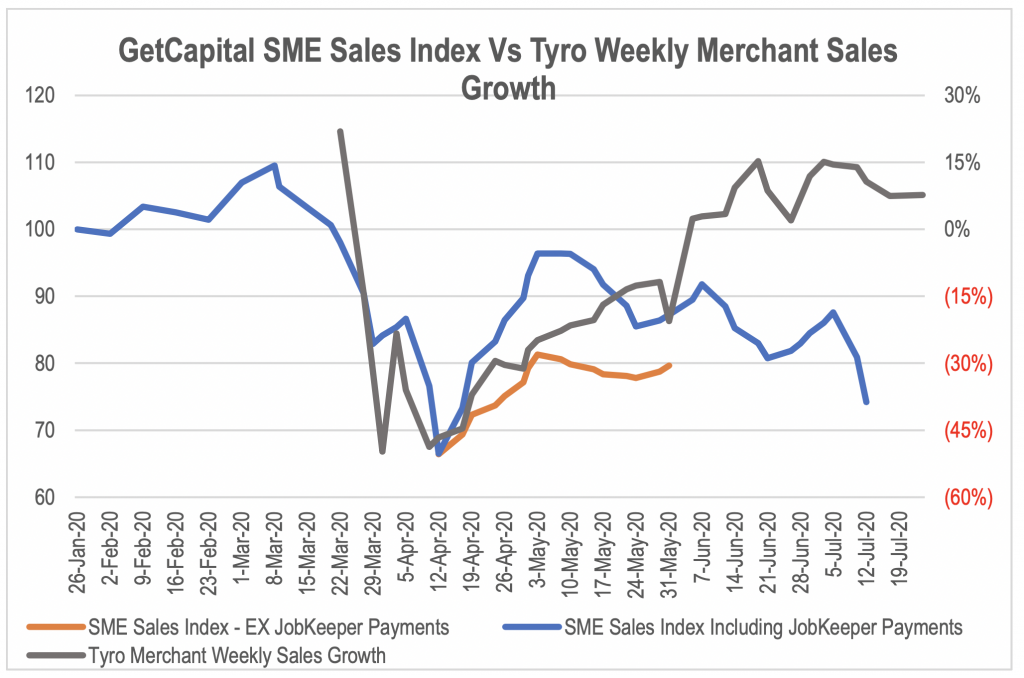 If we break down CBA’s overall card spending data geographically, the impact of the reintroduction of lockdowns in Melbourne can be seen quite clearly on in-store spending, while online spending has increased. However, even NSW, QLD and WA are showing a stabilisation of spending growth rates.

Transport spending growth has also been visibly affected by the lockdown in Melbourne due to the reduction in movement. 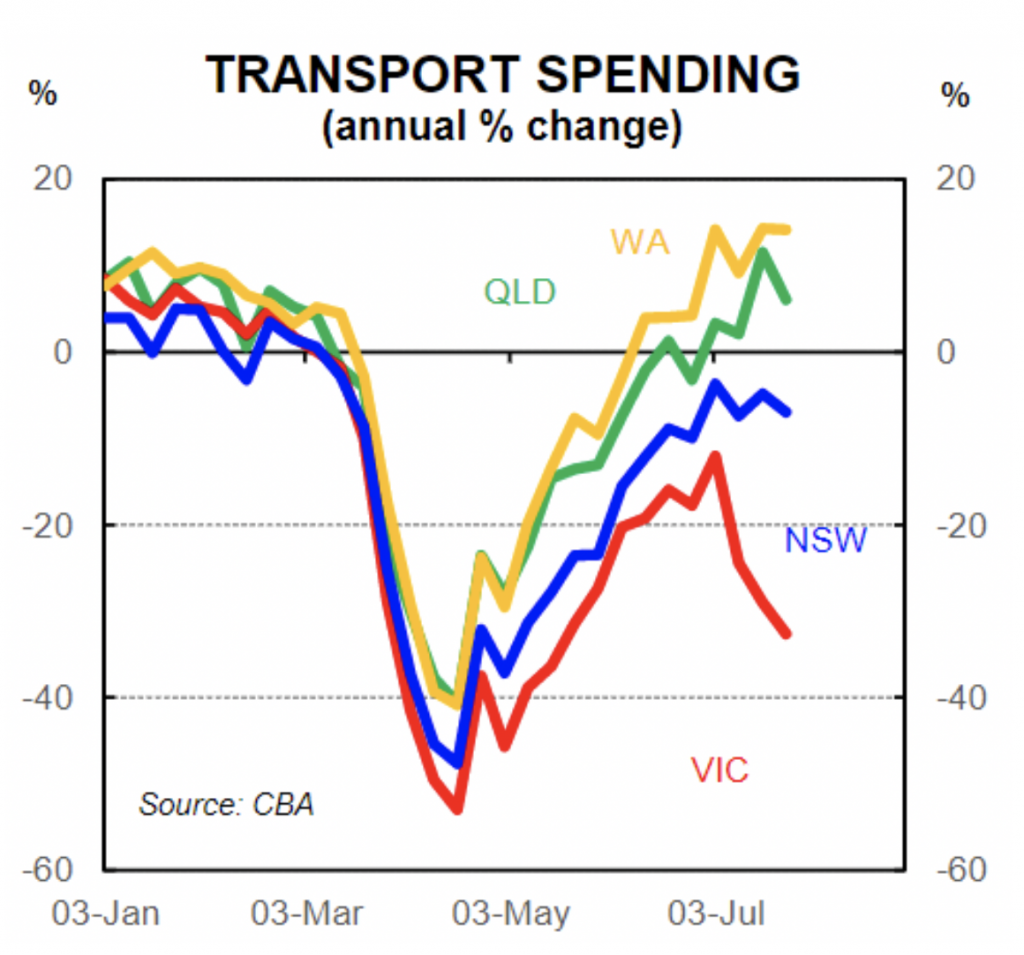 Putting it all together, what we are looking at is plateauing spending, which will likely drop once JobKeeper payments are pared back. If that pans out, business conditions may be really tough until a vaccine arrives.

You are reading an article about: Consumer discretionary, Market commentary