Yet another gloomy set of figures has just been released highlighting the woes that beset bricks-and-mortar retailers. It confirms our view that investors need to be cautious about retail stocks and, by extension, their landlords.

One early indication of retail spending and something that is much easier to measure than actual spending as you do not need to gather data from all retailers is foot traffic. ShopperTrak is one of the companies that tracks how shoppers visit and move in shopping centres, and their data can give a good view of the overall trends before we see the actual sales reported by retailers.

The Christmas period is very important for retailers as it represents a big portion of their annual sales. The saying is that retailers are often loss making apart from the first three weeks of December as those weeks account for more than the annual profit.

A couple of weeks ago, Citigroup published a note showing what happened up until the end of December and the picture is not very pretty! 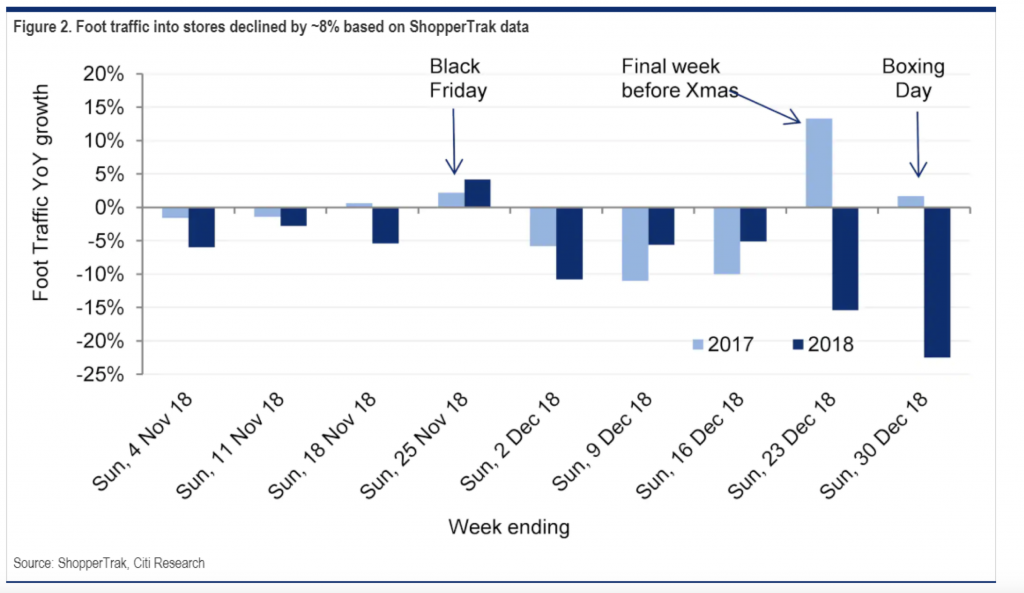 Overall, it shows that foot traffic decreased by about 8 per cent during December 2018 compared to December 2017. This is despite a population increase of 1.6 per cent according to the Australian Bureau of Statistics. There are only a few possible possibilities that this should not point to deteriorating trading for retail companies:

All other explanations point to deteriorating trading for traditional retailers and, by extension, for their landlords.

At Montgomery, we are not exposed to Australian retail companies or their landlords and nothing we see in the economic data so far indicates that we will change our minds.