CBA pays a dividend, but is there trouble down the pike?

CBA pays a dividend, but is there trouble down the pike?

Shareholders in Australia’s largest bank, the Commonwealth Bank of Australia, would have been relieved to read that the bank has delivered a decent full-year result – with a 98 cent dividend to boot.  But the near term may not be so bright, with the bank pointing to earnings headwinds in the months ahead.  Below is my summary of the key points from the full-year result.

Revenue declined relative to the six months to the end of December.

Net interest margin is set to decline further in FY21, with management guiding to a reduction to around 2.00 per cent as a result of further lending rate compression relative to funding costs, as well as falling returns on CBA’s liquid asset holdings as a result of the material decline in bond yields feeding through the bank’s hedge book.

While the fall in the bank bill swap rate to yields below the RBA’s official rate provides some funding cost benefits, the impact for the major and regional banks is less than for non-banks given most of their funding is sourced from deposits. Non-banks tend to source funding almost exclusively from wholesale markets. As a result, all of their funding cost base will be benefiting from the unusually low BBSW-OIS spread at present, making them increasingly competitive relative to the banks.

Operating costs were stubbornly higher than market expectations due to ongoing customer remediation costs resulting from the Royal Commission, as well as the need to increase costs to support customers through the COVID-19 crisis. Excluding the remediation costs in each period, average daily operating costs increased 3.0 per cent on an annualised basis relative to 1H20. Last year management announced a goal of achieving a decline in operating costs in absolute terms in the medium term. While COVID-19 made this difficult to achieve in 2H20, the bank will need to accelerate its realisation of cost savings to meet this goal going forward.

One of the main focuses for the market was identifying any information that would help assess the risk to asset quality from the COVID-19 pandemic and resulting recession. Having raised a A$1.5 billion collective provision overlay in the March quarter, CBA’s bad debt provision charge fell to under A$300 million in the 3 months to June 2020. This is a similar quarterly charge taken in 1H20. This is not surprising given short-term benefits from loan deferral provisions, government stimulus payments and temporary reporting provisions provided to the banks by APRA.

However, these benefits are temporary and the true impact of the COVID-19 pandemic on asset quality will become visible once these support measures are removed. In the meantime, the market is looking for clues among the details of loan deferrals and assessments of risk being provided by the banks.

CBA noted that the number of customers and value of loans that are receiving repayment deferrals (total or partial) has been reducing since May. 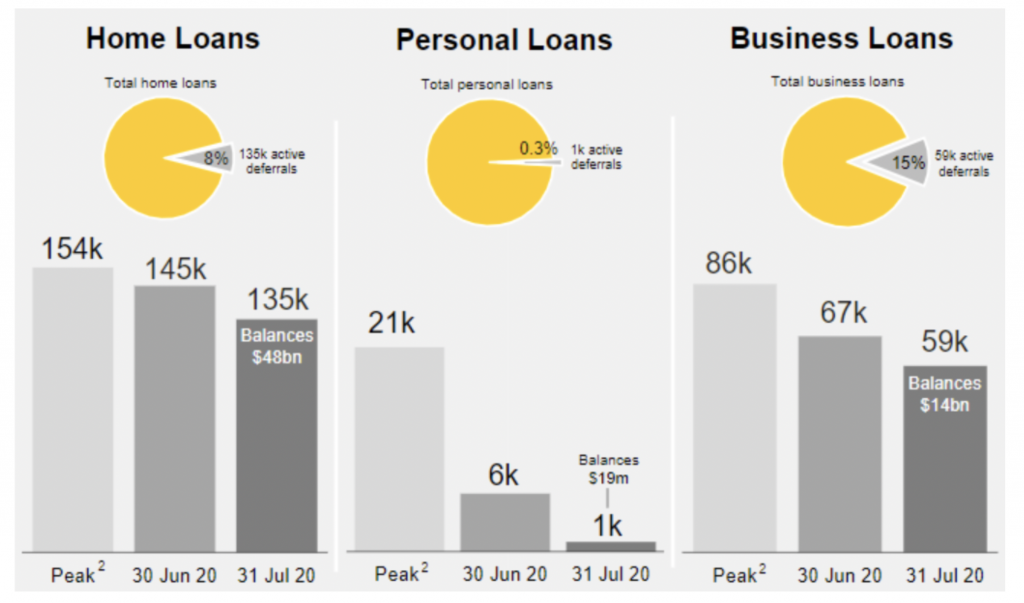 The number of deferrals on personal loans has fallen to negligible levels over the last 2 months. This is likely due to the shorter hardship period offered on personal loans relative to mortgages, and the relatively high rate of interest charged on these loans.

Interestingly, the rate of arrears on personal loans has not increased relative to the same time last year, despite the low proportion of accounts remaining on repayment deferrals. However, credit card arrears have increased materially. CBA commented that this was mainly due to falling balances as consumers paid off their credit cards, rather than an increase in the dollar value of arrears. 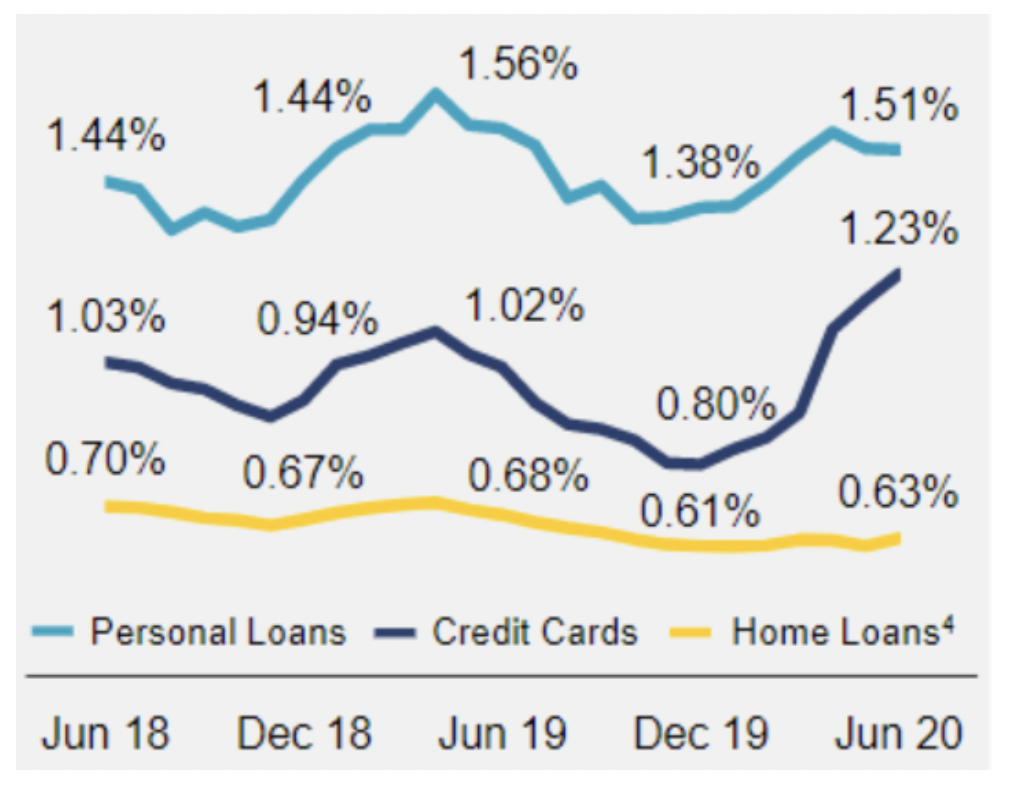 One concerning comment from CBA was that around 14 per cent  of its current loan deferrals are for customers that are on JobSeeker. While a little over half of these are joint accounts, the ability to service these loans is likely to become more difficult as these Government payments begin to be wound back from the end of September. Additionally, CBA was unable to quantify the proportion of the mortgage accounts on repayment deferrals that belonged to people benefiting from JobKeeper payments.

For the business loan book, CBA estimated that 30 per cent of the businesses that were deferring repayments were receiving JobKeeper payments.

This highlights the risks faced by the banks, and the economy more broadly, when these Government payments are reduced and then removed.

The main positive from the result was CBA’s capital position. CBA is clearly the best capitalised of the major banks at present, reporting a CET1 capital ratio of 10.56 per cent at the end of June. It also expects to receive the proceeds from the sale of CFS, BoCommLife and CommInsure during FY21 which is expected to add another 0.58-0.69 per cent to the bank’s CET1 ratio.

The strong capital position and profits from the sale of CFS allowed the bank to pay a final dividend of 98 cents per share, which surprised on the upside.

The Montgomery Funds own shares in Commonwealth Bank. This article was prepared 14 August with the information we have today, and our view may change. It does not constitute formal advice or professional investment advice. If you wish to trade Commonwealth Bank you should seek financial advice.

Shareholders in Commonwealth Bank would have been relieved to read that the bank has delivered a decent full-year result. Stuart Jackson summarises the key points from the full-year result. Click To Tweet
MORE BY StuartINVEST WITH MONTGOMERY