Why we’re strengthening our tilt to e-retailers

Why we’re strengthening our tilt to e-retailers

Our small cap fund’s investments in selected e-commerce enabled retailers has served us well during the COVID-19 period. With total consumption likely to decline over the next year or so, we think these businesses should continue to outperform Brick & Mortar retailers.

Recent internal correspondence here at Montgomery reveals some useful insights regarding the retail sector and how we are navigating the next chapter in Australia’s economic history book.

What we think the market knows

The market knows that current trading conditions are good. However, ahead of reporting season it is important to realise that the market can still be positively surprised by a retailer that can grow its like-for-likes metrics high single digits or better. Currently a potential barrier to sustainably higher valuation multiples exists in the form of expectations that FY21 and FY22 demand conditions look weaker post the stimulus-driven consumption surge. What happens to demand in FY21 and FY22 – the recent announcement on Jobkeeper and Jobseeker support packages shine some light on the next six months demand profile.

The Jobkeeper 2.0 announcement appears, on balance to be a modest net positive (see below). Being extended to March is better than prior expectations for an extension due to Victoria’s COVID-19 outbreak from the existing September end date to a November or December deadline. In terms of extent of support the market expected the government’s generosity to be wound back and become targeted based on means and needs so there is no surprise there.

Employers have to prove the relevant decline in turnover in all previous quarters to receive JobKeeper. For example, an application for assistance for the March 2021 quarter must prove a relevant decline in each of the June, September and December quarters. Tests of at least a 30 or 50 per cent reduction in turnover remain, but the tests are reapplied at the end of September and then again at the end of December.

According to the Treasury estimates the number of people who’ll be eligible for JobKeeper by the start of next year will fall from 3.5 million to 1 million.

The extension will cost the Government an additional $16 billion, taking the scheme’s total cost to $86 billion.

JobKeeper is being split between full-time and part-time workers. Anyone working less than 20 hours per week in February 2020 “pre-COVID-19″ will receive $750 per fortnight after September, down from $1,500. From January 3, 2021 the payment will decline again to $650 per fortnight.

JobSeeker 2.0 Reduced and extended until December

The JobSeeker extra fortnightly supplement of $550 will be cut after September to $250 a fortnight. The total payment will fall to $815 from $1,115. To encourage a return to work, from the end of September, recipients can now earn $300 a fortnight (previously $106), before JobSeeker is affected. JobSeeker recipients will be required to start actively looking for work again and undertake four job searches a month from 4 August. Penalties for failing to look for work will be reinstated and for those who refuse a job offer.

The government has advised further changes will be announced in December.

While our PM slapped down a reporter today who enquired as to the timing of the next election (“people are dying you idiot!”), he cannot escape the election cycle and so wage subsidies cannot be wound down too aggressively, and given $70 billion has already been spent to sustain economic conditions, a hard reduction is irrational in that context alongside wasteful.

The latest iteration of JobKeeper is a test of the government’s economic management credentials. Quite sensibly, JobKeeper 2.0 is designed to keep alive the jobs with the highest prospect of returning rather than continuing a more general pledge that delivers support to jobs that no longer exist and may never sustainably return.

Notwithstanding the government’s preference to be everyone’s friend, the impact of COVID-19 lockdowns on businesses and corporates mean that job losses are coming to some extent, and the unemployment rate will be higher than pre-COVID-19. In our view these changes are going to impact the levels of consumption ahead, and while the market appears to be aware of this, it has of course the potential to be surprised when we get there.

So, we begin the next chapter with the stimulus driven artificially elevated level of consumption as confirmed by recent data (see Figure 1.). The market now expects that consumption declines from that above normal level to a lower level. 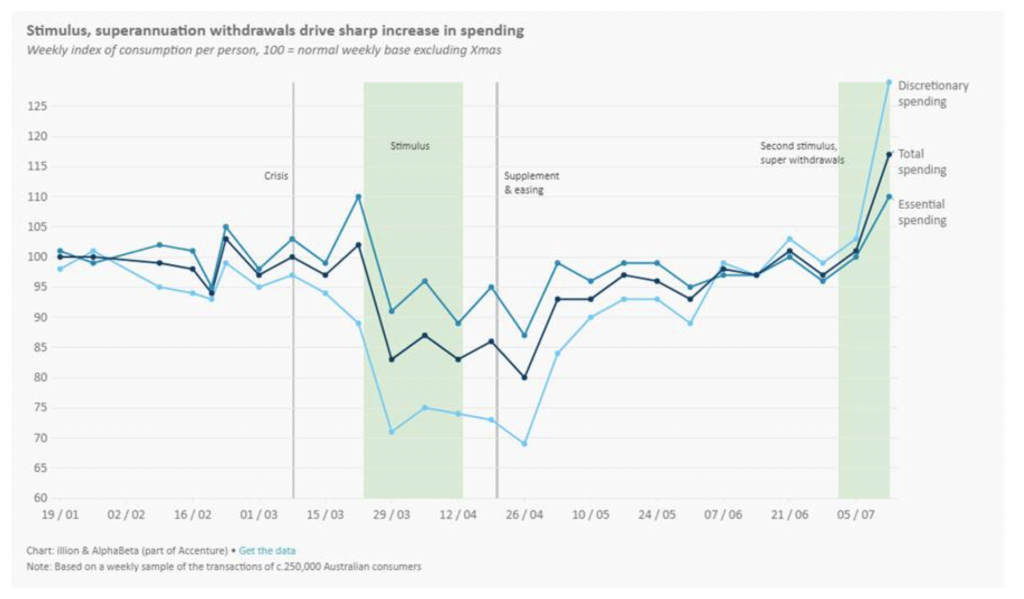 What we think the market doesn’t know

What the market doesn’t know is what the new level of consumption demand will be. The announced changes to JobKeeper and JobSeeker, whilst lower than existing arrangements, do extend and taper government support. That means demand won’t be falling off a cliff in September when the initial support package comes to an end, but a gradual supported adjustment to a lower but more sustainable level of demand.

Also unknown is what shape any recovery will take. The impact of a potential vaccine arrival or the possibility of further lockdowns and changes in government support to reflect either of those two situations are all unknowns. There are factors that are clear headwinds to consumption including unemployment, weaker wages (under-employed) and less job certainty– all the usual stuff.  The market knows it’s coming but not how good/bad will it be? There are plenty of unknowns.

How are our Small Cap team navigating this period?

Retail will likely be a stock market battleground – a volatile sector with widely divergent expectations. We acknowledge that balance sheets of retailers generally look good. The period of excess demand, inventory sell through at good gross margins – thanks to JobKeeper support and rent/landlord adjustments plus capital raisings mean that balance sheets for the sector are now much stronger than feared.

The rally in retail stocks however has paid investors who anticipated that outcome handsomely. Our view is that most of the value accretion, if not all has probably occurred; we have made the “easy money.”

So, our small cap team is now changing tactics.

Brick & Mortar (B&M) retailers aren’t expensive, balance sheets are good, and the scope for cost save from rent resets are also ahead.  But leaner demand is likely on the way. So, with the sector recovery valuation reset largely done they have reduced their exposure to B&M retailers. The Fund already held and has done well out of e-commerce retailers through the COVID-19 period, but has added to these positions preferring the structural growth angle this presents.

On balance we believe the cycle is going to weaken from the elevated spend levels, not dramatically, but weaker nonetheless and those e-commerce enabled businesses should grow more independently of the economic cycle. The CBA spending chart below shows this movement of in-store spend bouncing back hard to normal, but on-line powering on. That’s the structural tailwinds the Fund is looking to position for. 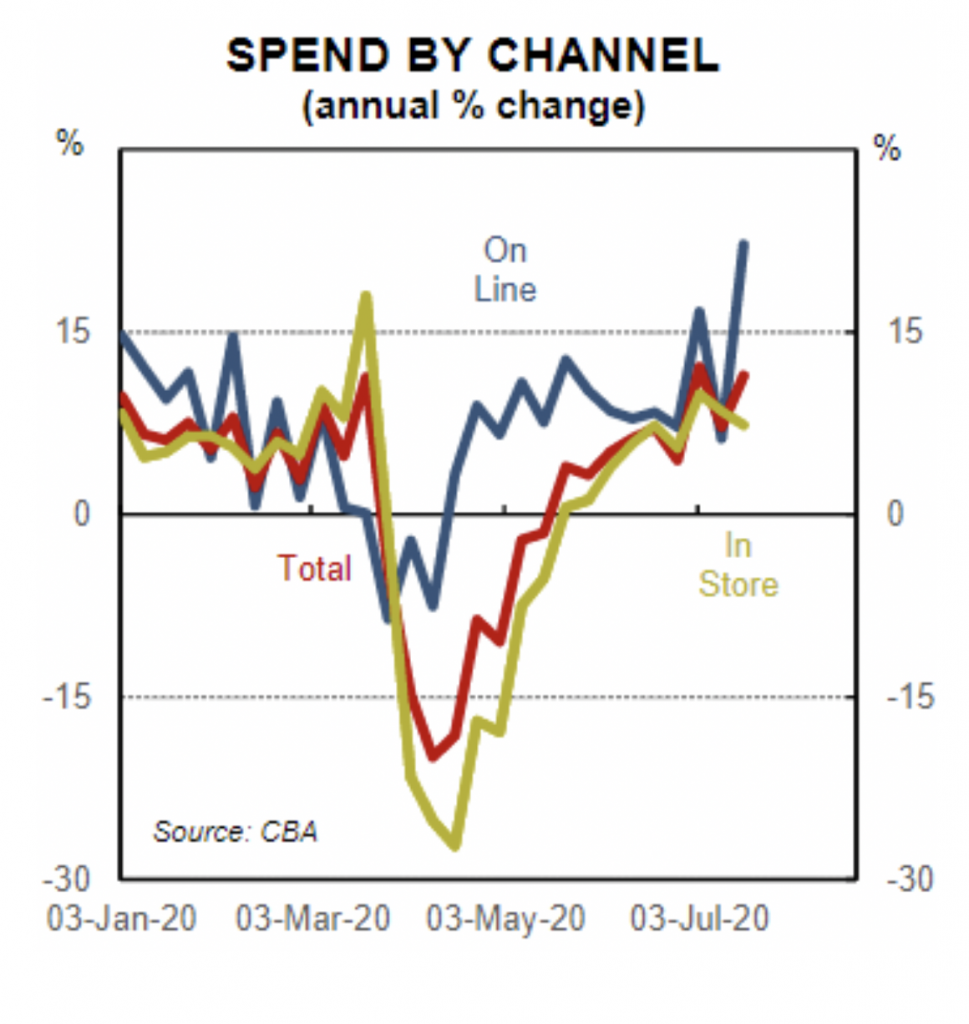