Why we win when iRobot loses

Why we win when iRobot loses

Some time back, our Montaka global fund took a short position in iRobot (Nasdaq: IRBT), which makes Roomba robotic vacuum cleaners (RVCs).  So far, our strategy is paying off, with the IRBT share price collapsing over the past six months.

While these devices automate vacuuming, and provide reprieve from an otherwise monotonous task, there is mounting evidence that IRBT is following the path many pioneering companies of a new technology follow: one of commoditization, competition, and significant price deflation.

We are seeing clear evidence of competition biting, and increasing challenges being faced by the business. IRBT has had to increase promotional spending to combat intensifying competition from Chinese manufacturers of RVCs. Let’s look at an example. IRBT’s Roomba i7+ retails for around $1,000. This is IRBT’s flagship model, with all the bells and whistles, including automatic dirt disposal and home mapping. Now let’s consider the equivalent Shark IQ RVC, a Chinese competitor product. The Shark IQ RVC also includes self-emptying features and home mapping. The key difference is that the Chinese competitor RVC doesn’t cost $1,000 – it costs just $450.

It’s perhaps unsurprising that earlier this month IRBT sued SharkNinja Operating LLC, the company that manufactures the Shark IQ RVC, for patent infringement. IRBT’s complaint makes the following remark: “Shark is not even shy about being a copycat—claiming that the Shark IQ Robot offers the same iRobot technology at ’half the price of iRobot i7+’”.

This litigation case is symptomatic of a situation of rising competition, and competitor products that are quickly able to catch up to the features of IRBT’s Roomba RVCs. At a minimum this litigation case will require incremental costs from IRBT to pursue its patent infringement claims. In a worst-case scenario for IRBT, the company could receive an unfavorable ruling which would provide a clear path for competitors to compete away IRBT’s market share. We are already seeing evidence of this, with IRBT losing an estimated 10 percentage points in market share year-over-year in 2018. 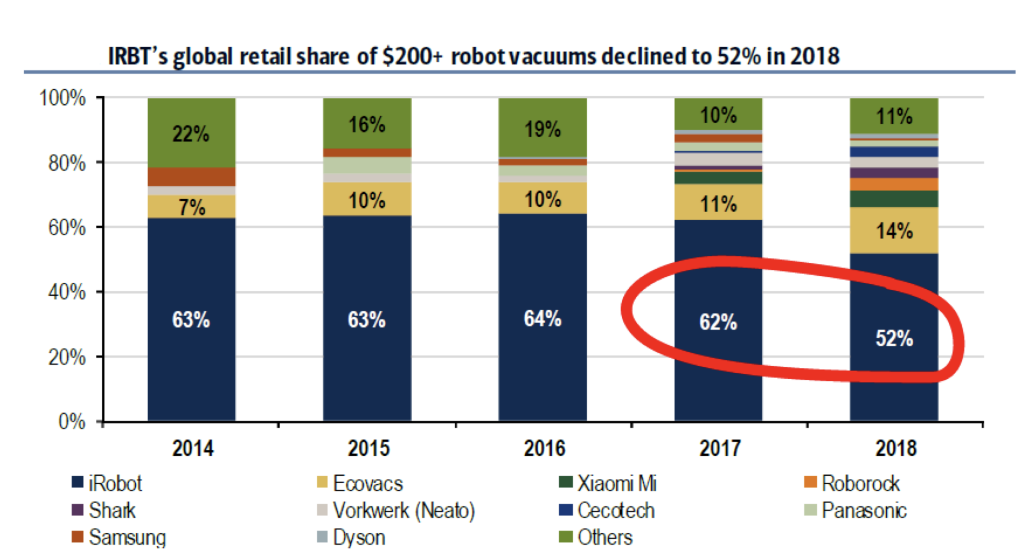 IRBT until recently has had a clear first mover advantage, given that they pioneered the RVC category. However, as competition continues to increase and these RVCs become increasingly commoditized, the category is likely to experience price deflation. We have seen this dynamic with countless other new technologies such as radios, televisions and computers. We see no reason why the RVC category will be able to escape this fate. IRBT’s woes are being compounded by its exposure to tariffs that have been imposed on China, given that all of its RVCs are manufactured in China.

During the second quarter of 2019, in response to higher tariffs, IRBT raised prices on its products. Unlike the first round of price increases, IRBT’s Chinese competitors did not follow IRBT’s second round of price increases. The result was a capitulation by IRBT, following the poor customer response: “Sell-through following our late July price increases was suboptimal…we elected to roll back our pricing to pre-tariff levels on most of our products”. What follows over the next few quarters could be particularly interesting.

IRBT’s gross margin declined by 450 bps in Q2, and this was with the price increases in place to mitigate tariffs. We are likely to see further gross margin compression in future quarters, in addition to the top-line pressures being faced by the business. Despite the IRBT short having performed well for our investors, we continue to see further downside as pressures build in the coming quarters. 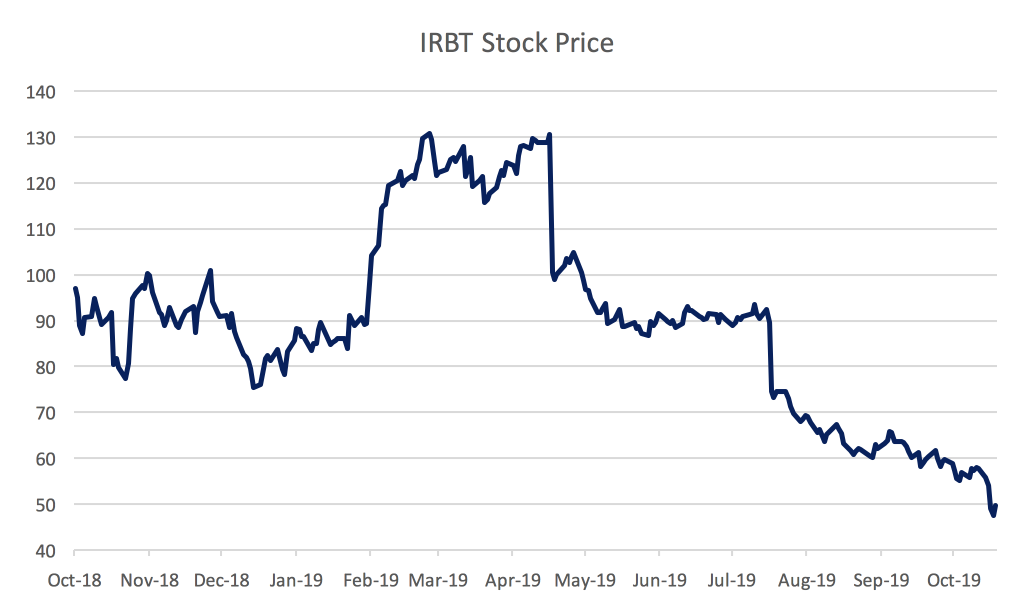 Montaka own is short shares in iRobot. This article was prepared 04 November with the information we have today, and our view may change. It does not constitute formal advice or professional investment advice. If you wish to trade iRobot you should seek financial advice.