Why we continue to put Vocus on hold

Why we continue to put Vocus on hold

Just 12 months ago, Vocus Group (ASX: VOC) soared above $9. Unfortunately, for investors who held on (happily not us – we sold out near the top) that was as good as it got.  The telco’s share price has since plunged to around $3, which prompted us to re-evaluate the business. What we found failed to give us a buzz.

Vocus issued several downgrades in FY17, most recently at the Macquarie conference in early May 2017.

Vocus expects its FY17 NPAT to be in the order of $160-$165m meaning that the firm is trading on a price to earnings ratio of about 11.0x. However, we’re also going to deduct the capitalisation of operating expenditures related to customer acquisitions (circa $40m, or $28m post tax). It’s fair to say that this capitalisation is standard in the industry… however, it’s not standard in terms of the earnings we receive as investors, so let’s deduct it.

Hence we’d assess the earnings run rate post all acquisitions and other events looks to be about $130m (i.e. the company is trading on about 14x earnings). Using a 10% cost of equity, we can see that Vocus will need to grow its earnings base in order for 14x to be a fair valuation (and we haven’t started to consider whether the firm has upside yet).

But then we’d question: would the $130m of earnings now be sustainable? A significant portion of the Vocus earnings base derived from ADSL broadband and telephony services (included in the ‘Mass Market segment’ in the table below). This table was taken from the firm’s 1H17 financial statement. The figures would need to be analysed for comparative purposes but we’re only trying to demonstrate roughly where Vocus is making its money from. 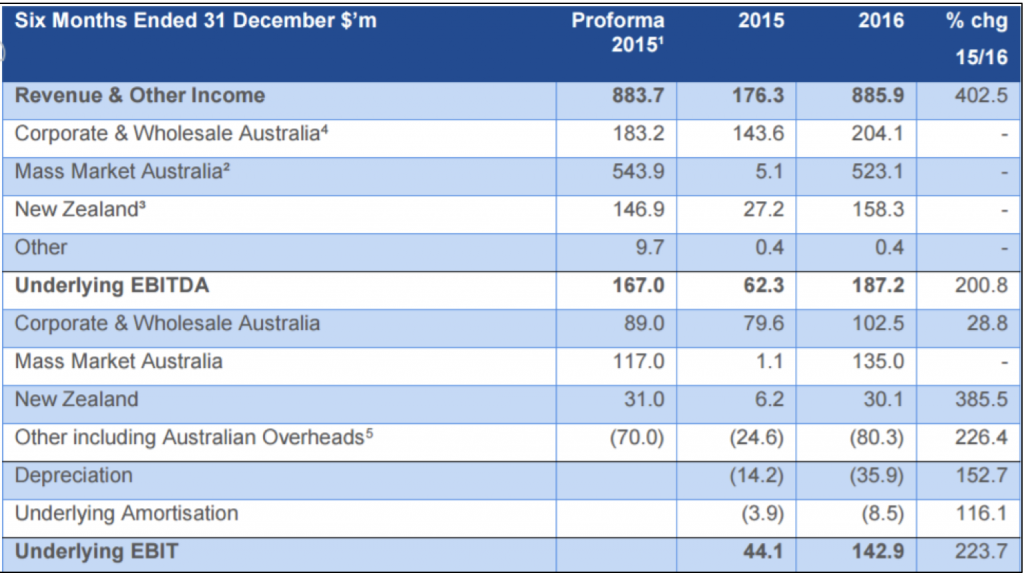 Many sell side analysts are correct to say that the transition to the NBN impacts Vocus earnings less than that of peers such as TPG Telecom Limited. However, would this matter? The below charts show just how much revenue consumer broadband earns for Vocus. 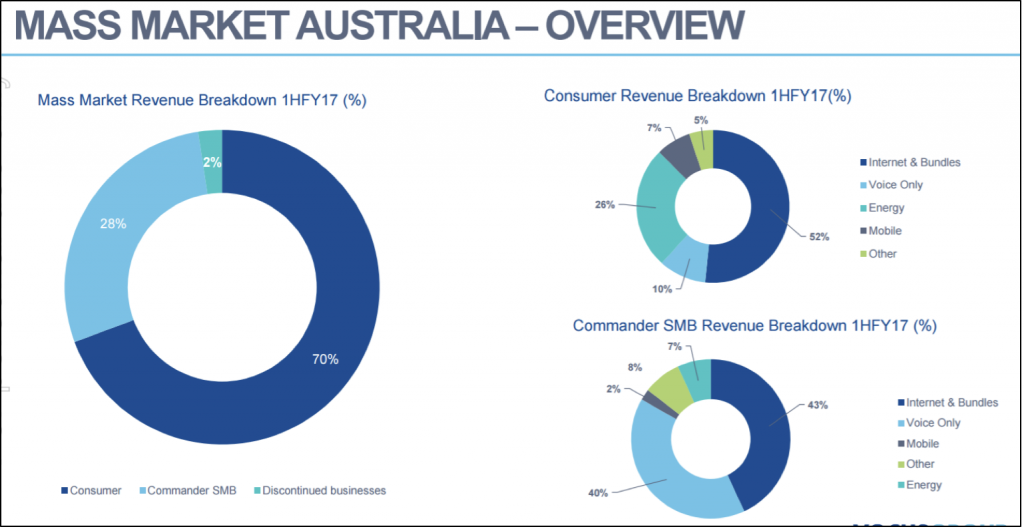 Margins on these revenues are obviously a function of legacy ADSL margins and new NBN margins. Current average NBN operating margins are derived something like this.  We’d say that this is likely not a bad guess for the economics of a Vocus broadband customer.

If we read through NBN’s corporate plan, it anticipates NBN wholesale costs rising to $52 by 2020. The industry is under the belief that this can occur via the average consumer buying more expensive $100 per month plans which have a much higher wholesale cost. However, who says that the average consumer can afford this? The option is already available and only 15% of consumers have taken up the option. Almost all other consumers have taken up much cheaper $60/$70 per month plans.

Others contend that the NBN Co will discount its pricing. NBN Co management has agreed that it is happy to give out discounts but has also clearly stated that it expects any changes in offerings to have a revenue-neutral outcome.

It’s certainly possible that the books of NBN Co may be written down and for there to be actual revises its pricing downward which would boost reseller margins. However, we’d say that such a boost would likely be temporary. Why? Because improved profitability is bait for competitors which would put pressure on industry ARPUs and eventually restore margins to where they were before NBN revised its pricing. And is there really any barrier to setting up an NBN reseller? Maybe some capital and a few years of time, but not really. Vodafone seem to not think so.

Let’s run the prior exercise again assuming that wholesale costs rise by merely 10%. Note that NBN expects wholesale costs to rise to $52 and there’s two ways that this can occur – either through the telcos provisioning more expensive broadband plans ($100 per month for up to 100mbps speed) or consumers can simply keep increasing the amount of Netflix/streaming that they watch which will force the telcos to provision more bandwidth, which costs more.

But let’s stick with 10% for now. What happens to margins then? 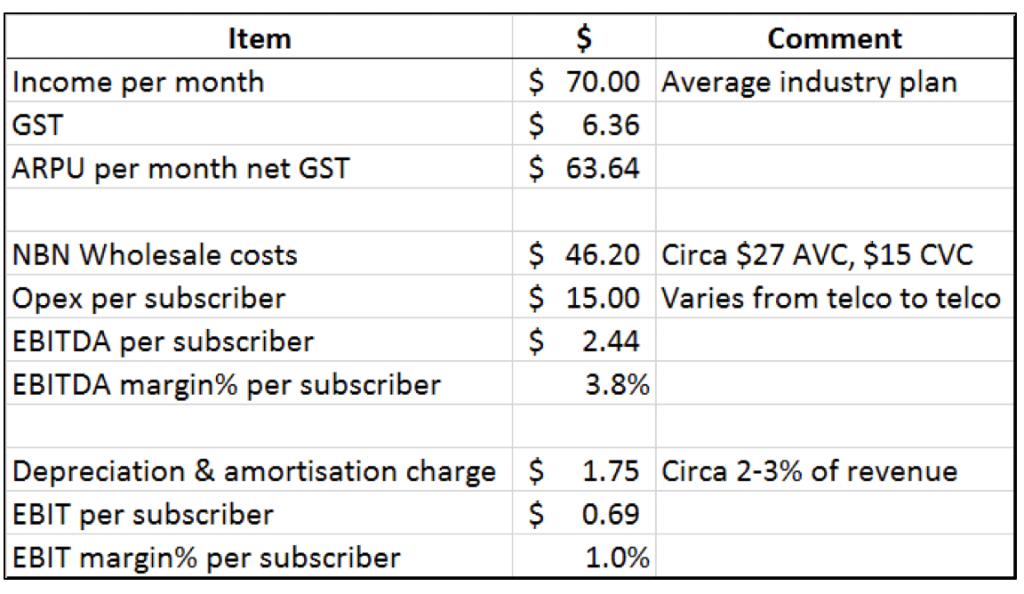 Via the above example, we’re not attempting to suggest that this is exactly what will happen to VOC’s consumer broadband margins – we’re just illustrating that it seems difficult to envision a scenario where industry costs keep rising without any pressure on margins.

But wait – why wouldn’t the incumbent telcos just raise prices to offset the costs? We asked this question last year having been told by many executives in the industry that just that would occur – until it didn’t. The reason was that the telcos believed that prices should remain low and data allowances high to reduce churn and potentially take market share from other players. i.e. The incumbent telcos see the rollout of the NBN as a once in a lifetime event to grab market share from their rivals.

But such a landgrab is costly and will take years. Meanwhile shareholders in these companies are subject to the weak margins that such competitive pressures usually deliver.

Because of this, when we look at consensus earnings estimates we can’t help but feel puzzled. We’re uncertain as to why earnings in FY20 are dropping off (perhaps a more bullish set of numbers has been dropped from the dataset in that year). However, why should earnings be so stable over FY18 & FY19? And let’s think further – why should we price such earnings stability into our terminal value? The market seems to be implying this.

Vocus notably also has a strong wholesale and enterprise business which has historically enjoyed several years of growth under the stewardship of James Spencely and Richard Correll (note the chart below). Much of the growth was via acquisition (which notably added a lot of value) but underlying organic growth was still present. 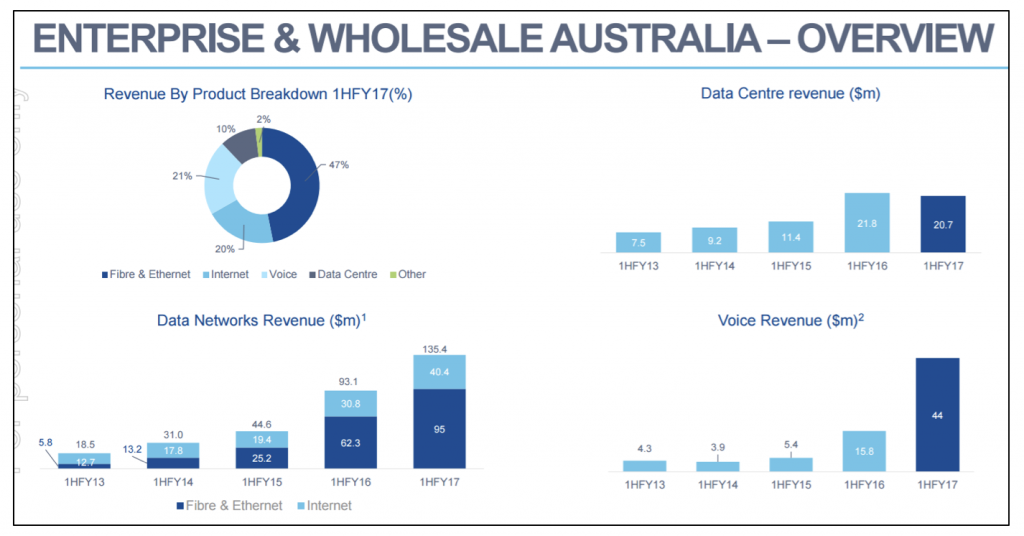 James and Richard are no longer running Vocus and stewardship has been picked up by others. However, it was disclosed by Vocus management at the Macquarie conference that growth in this division had recently slowed, although steps were being taken to remedy the issues.

We were curious as to the extent of this slowdown and began enquiries with resellers of Vocus wholesale & enterprise services. The feedback that we got was that provisioning issues were indeed occurring and that the remedial solutions had not yet been effective. As we understand it, the issues are largely administrative and could take a while to resolve.

To sum it up: with a corporate division that appears to be stagnating and consumer division margins under pressure, how can this company be worth 14x earnings?

We’re not sure either.