Why the east coast gas crisis is such a big deal

Why the east coast gas crisis is such a big deal

My recent blog post on the national energy debate created some heated (sorry!) responses from a few of our readers. Now I’d like to discuss another hot energy topic, the east coast gas crisis, which has seen a constrained domestic supply send gas prices soaring by a whopping 300 per cent since 2015.

East Coast gas prices are important for a numbers of reasons:

We are indeed glad to see that the political debate has shifted slightly in the last couple of weeks from the focus on keeping old coal fired power stations open past their design life to instead addressing the real problem with the energy market which is the price of gas.

Prime minister Turnbull last week made a deal with the LNG exporters to divert more gas to the domestic market rather than selling it on the Asian spot market. The deal was agreed under the threat of triggering gas export control regulation.

So, let’s take a look at what has happened to the price of gas. The chart below shows the comparison between the Sydney spot prices for natural gas (source: AEMO) and the Singapore spot liquefied natural gas (LNG) prices (source: Bloomberg) in AUD/GJ.

We will divide the chart into 3 parts and discuss each separately. 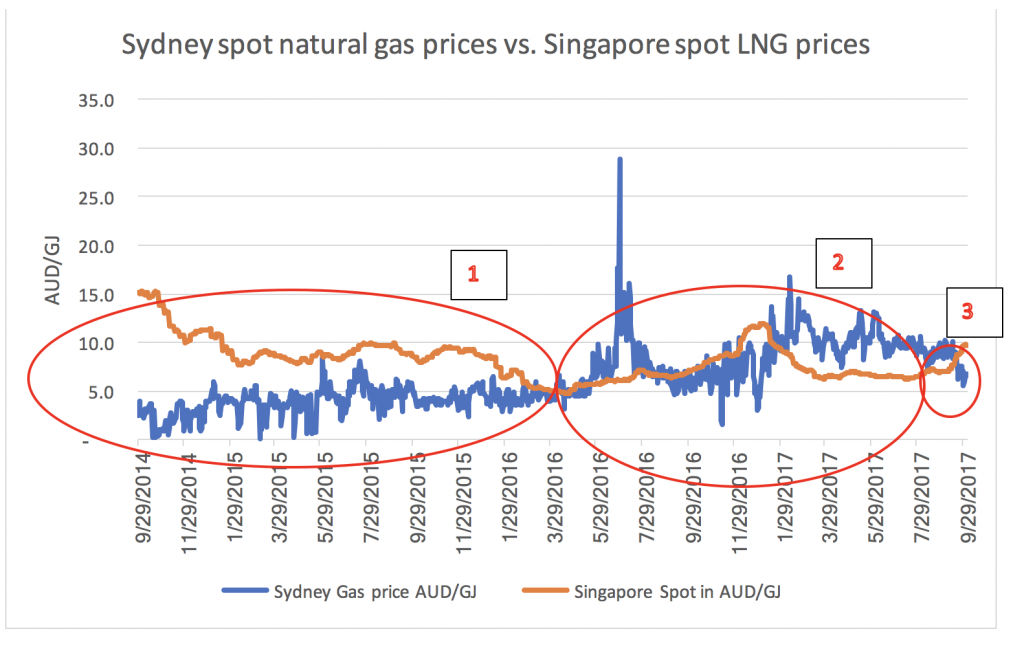 This is the situation before about mid-2016 which is before the LNG projects in Queensland really started to ramp up production and consume a lot of gas. The domestic market was very well supplied as the gas producers were developing gas production to make sure that they had available gas to feed the LNG trains when they came on-line and they marketed this excess gas domestically.

During this time we also saw a significant decline in the Singapore spot price from about $15/GJ to ~$5/GJ. The reason for this is both the growth of LNG production in the world and the fall in the oil price from above US$100/bl to about $55/bl (the price of LNG is closely linked to the oil price and most contracts are written with reference to the oil price).

We then entered a period, starting around mid-2016, when the LNG projects in Queensland fully ramped up and started consuming a lot of gas. As a consequence, the domestic market experienced a supply shortfall and we saw gas prices rise significantly above the long term average and even the bizarre situation with domestic prices exceeding the price in the spot market in Singapore.

Now, normally, in such a situation with prices in export markets being significantly lower than the domestic prices and there being additional costs involved in the export of the gas (liquefaction and shipping), we would expect the gas producers to divert gas from export to the domestic market as the returns should be higher but this has not happened until very recently. There are a couple of reasons for this:

In the last 2 weeks, we have seen a sharp reversal of this trend with Singapore prices rising sharply and domestic prices coming down significantly so that normality has returned – with lower domestic prices than export prices. This raises a number of interesting questions: