It’s hard not to shake your head in disbelief at the misinformation and spin being peddled by our politicians around an issue that is dominating domestic political debate: energy policy and prices. In this blog, I’m going to tackle three big myths that some of our leading advocates would have you believe.

(I won’t be talking about the other big national debate going on right now – gay marriage – which, according to this writer, should not be an issue/debate at all as it should just be settled by a court deciding that it is not ok to discriminate against a certain portion of the population.)

Coal is the cheapest form of energy

This is not true if we include the cost of construction. Goldman Sachs shows it well in the chart below through showing the Levelized Cost of Energy (LCOE which is a measure of the lifetime cost of energy including construction and maintenance cost) for different types of energy. Solar and wind are indeed the cheapest cost of energy to construct for new energy and hence the people calling for Australia to build new coal fired power stations have, even if we disregard the long-term climate change costs, no leg to stand on. Even at current gas prices, it does not make sense to build coal fired power stations! 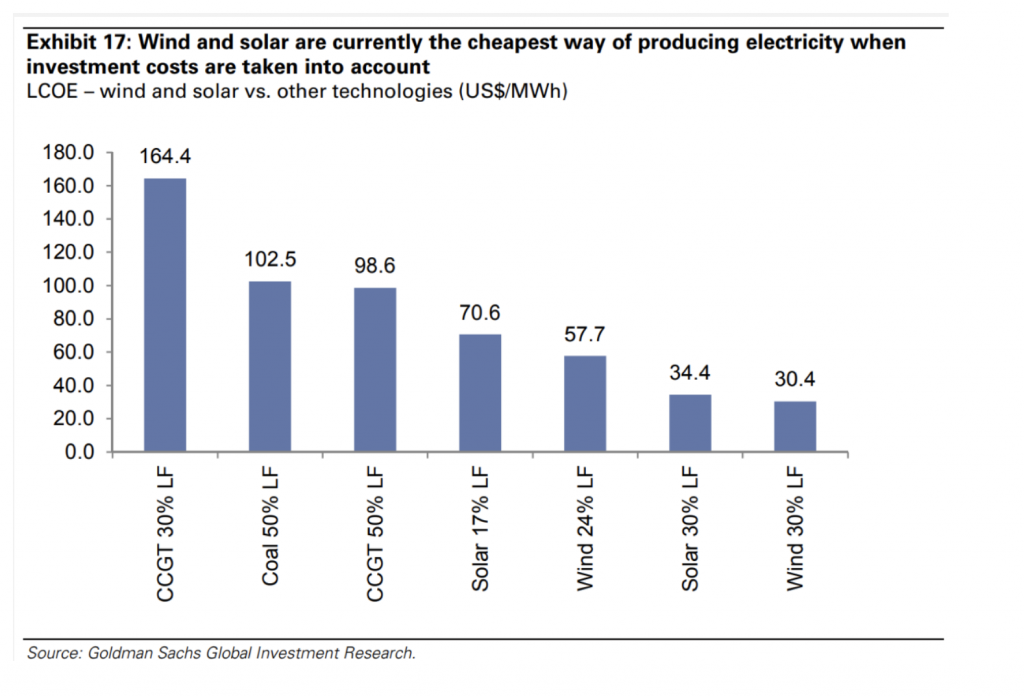 One should also be aware that even just keeping a power station operating past its scheduled life can cost significant amounts of money. Prime Minister Malcom Turnbull has during the last few days had a public spat with the CEO of AGL, which owns Liddell power station, about operating the station past its scheduled closure in 2022. Liddell opened in 1972 and is currently 46 years old and will be 50 by the scheduled closing time. Maintenance scheduling for a power station is a very complex science and to decide to extend the life relatively close to scheduled closure date can involve a significant investment, meaning that the cost of that power can very well be higher than burning gas in a gas power station. Now, I do not propose to have any detailed insight into the cost of extending the life if Liddell by another 5 years, but based on the figures I am familiar with from the Northern Power station in South Australia, it will most likely be in the 100s of millions of dollars.

Without going into too much detail on how the National Energy Market (NEM) works, it is neither coal nor renewable generation that sets the electricity price. Coal runs as a base load with low marginal cost and renewable generation has zero marginal costs and both types of generation is, in the short term, not really dispatchable (being able to be ramped up or down to respond to demand). Due to its easily dispatchable nature, it is gas generation that sets the electricity price, especially when demand and prices are high.

It has been obvious for a long time that the cost of renewable energy would come down significantly over time and eventually become by far the cheapest source of energy as well as by its very nature not having any greenhouse emissions. The policy for a long time has therefore been to transition the electricity generation to renewable energy and away from coal for both economic and climate change reasons. Given the unpredictable nature of the generation from solar and wind and the high cost of energy storage at the time (battery storage costs are coming down rapidly but are still not at a level where it makes commercial sense to deploy at large scale – I believe we will get there within 3-5 years depending on the technological progress driven by electric cars). Pumped storage costs are not coming down at all so the decision to invest untold billions in Snowy Hydro 2 looks very strange to me as by the time this is finished, the cost of battery storage and solar generation will likely be significantly reduced so this has the potential to become a big white elephant, the decision was taken to use natural gas (methane) as the transition fuel before a full transition could be completed.

The main problems were:

The lack of coal power caused the South Australian blackouts

Quite a few politicians keep blaming the lack of coal power in SA for the power blackouts last summer despite the clear conclusions in AEMO’s report that it was basically a combination of 2 factors:

This lead to an overload of the interconnector to Victoria which shut down to protect itself and this caused the black-out of the SA power system.

Granted, having the coal power station on-line might have helped a little bit but the main cause of the black-out was the tornados that destroyed power lines south of Port Augusta. We should also note that Pelican Point, the gas fired power station in Adelaide, was operating at much less than half capacity due to the high price of gas making it uneconomic to run.

I will stop there but these are at least three misconceptions being spread that you should have in mind when listening to the debate.

PS, I will finish off with a TIP! If you have not shopped around for a better deal on electricity or gas within the last year or two, you are to a very high likelihood paying too much and if you have never shopped around, you can with almost 100 per cent certainty save 10-15 per cent on your bill with just a few phone calls.

If you think you are, go to https://www.energymadeeasy.gov.au and check which are the cheapest three suppliers in your area and for your usage.

Do not sign up directly but call each of them up and negotiate and play them off against each other.

Once you have established the best offer in the market, call your existing provider and tell them you have been offered a better deal and ask them to beat it. Losing a customer is very expensive for an energy company as it costs them a lot in marketing cost to replace that customer and they will be able to negotiate significantly to make sure that that does not happen.