Why did Nufarm’s share price rally following its result?

Why did Nufarm’s share price rally following its result?

The share price of agricultural chemical company Nufarm (ASX:NUF) increased 26 per cent on Monday following the release of its earnings results for the 12 months to July 2019. The company also announced the sale of its Latin American businesses to its major shareholder, Sumitomo.

The earnings results were largely in line with sell side analyst forecasts. However, market expectations had already been lowered significantly on the back of a string of trading updates throughout the year. Results for the year were well below what the company regards as ‘normal’ due to a combination of adverse weather conditions that took their toll on demand for the company’s products, and supply chain issues. Excluding the impact of acquisitions, EBITDA fell 2.4 per cent during the year, while the acquired portfolio of products in Europe delivered well below management’s expectations from the time of the acquisition a little over a year ago.

So why did the share price rally so significantly when the company at best met lowered market expectations?

The reason lies in the positioning of market participants leading into the result release. Despite the A$300 million equity raising undertaken by the company 12 months ago, the weak trading had resulted in increased balance sheet gearing. Due to high working capital requirements, the core agricultural chemicals businesses are capital intensive in nature.

When demand disappoints, it has multiple consequences including a negative impact on sales and inventory build from forward orders of inputs ahead of the selling season. The inventory build tends to lead to margin erosion as competitors look to sell excess stock. It also leads to higher than normal financial gearing as debt remains higher than normal post the purchase of seasonal stock requirements.

The increased risk of ongoing pressure on both earnings and gearing created a perception that more equity funding could be required in the near term. Those looking to benefit from such an outcome built short positions in the market that grew as the near-term outlook deteriorated with each successive trading update. By the time the result was released, over 20 per cent of the free float in the company’s stock had been shorted. 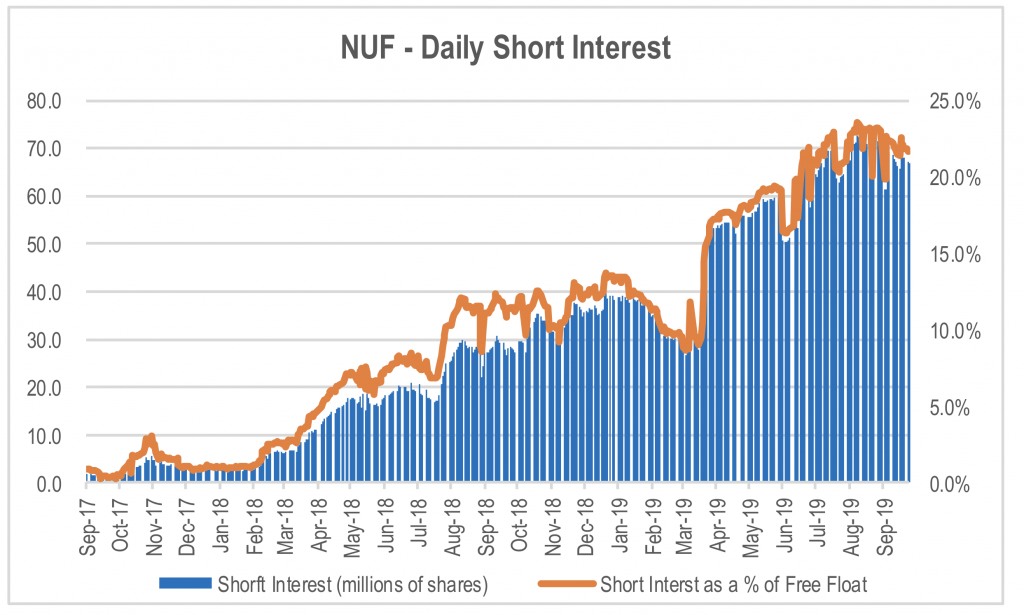 The announcement of the sale of the Latin American operations to Sumitomo materially impacted the bear case for the stock. The price received for the business was above the value attributed to it by most sell side analysts.

Additionally, the proceeds received reduced the company’s net debt from 3.0x EBITDA to just 0.7x, shifting the risk from potentially having to raise equity, to a position of relative balance sheet flexibility with the possibility of capital management in the medium term. Lastly, it removed the most capital intensive, highest risk, and most exposed business to volatile currencies from the company’s portfolio.

The unwinding of the bear case has resulted in a short squeeze, driving the share price up as those with short positions rush to unwind their positions. Given average daily turnover in Nufarm of 3.3 million shares, and a short interest of 66.8 million shares as of 24 September, the aggregate short interest would take 4 weeks of trading to unwind even if every buy was from a short seller closing out their position. This is likely to see Nufarm’s share price remain well supported for some time.

My colleague Joseph wrote an article about short squeeze previously, click here to read it.