Why consumer-oriented stocks could soon struggle

Why consumer-oriented stocks could soon struggle

While the Federal government continues to crow about the strength of the Australian economy, a worrying trend is occurring that is getting less attention: Australian households are saving less. Sooner or later, this trend will reverse. And when it does, consumer-oriented businesses will feel the heat.

The highlight as you might have seen in the news as that GDP showed an unexpected strong growth of 3.4 per cent compared to the same quarter last year.

One of the strongest contributors to the stronger than expected growth figure was the very strong consumption numbers which grew even stronger at 3.5 per cent compared to the year before.

On the face of it, this looks like good news for the economy but if we dig a little bit deeper into the statistics, some worrying trends show up that throw up some question marks about how sustainable this is.

First, we can start by establishing that household consumption growth contributed 54 per cent of the total GDP growth in the June quarter and constituted ~59 per cent of Australia’s total GDP.

Secondly, we can see that household consumption has grown relatively steadily at a pace of between 2-3 per cent since 2013. 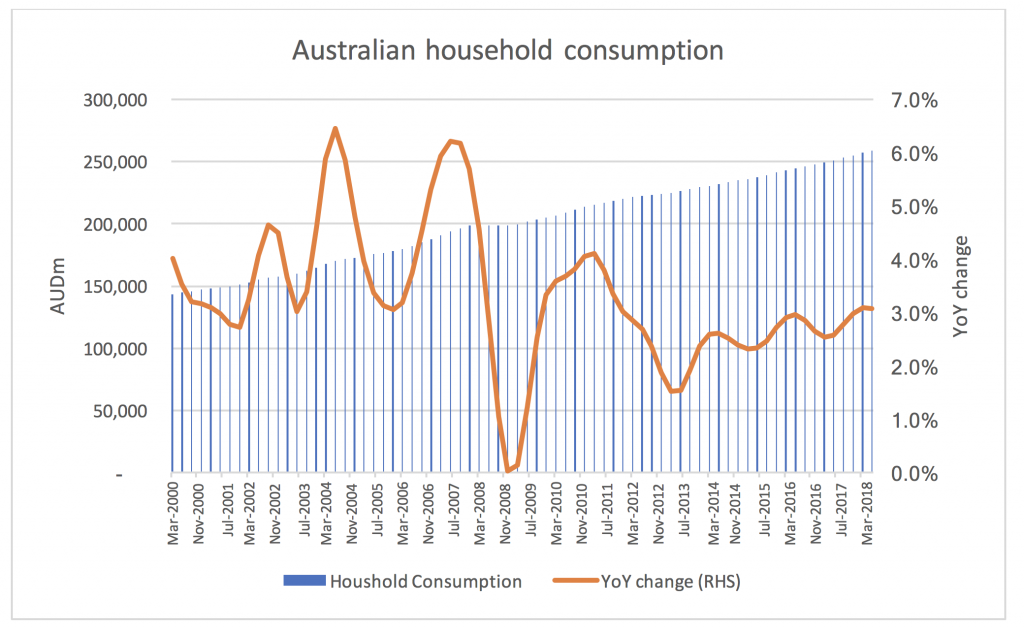 So far so good!

What is really worrying is that the household savings ratio is rapidly collapsing and is now only at 1 per cent: 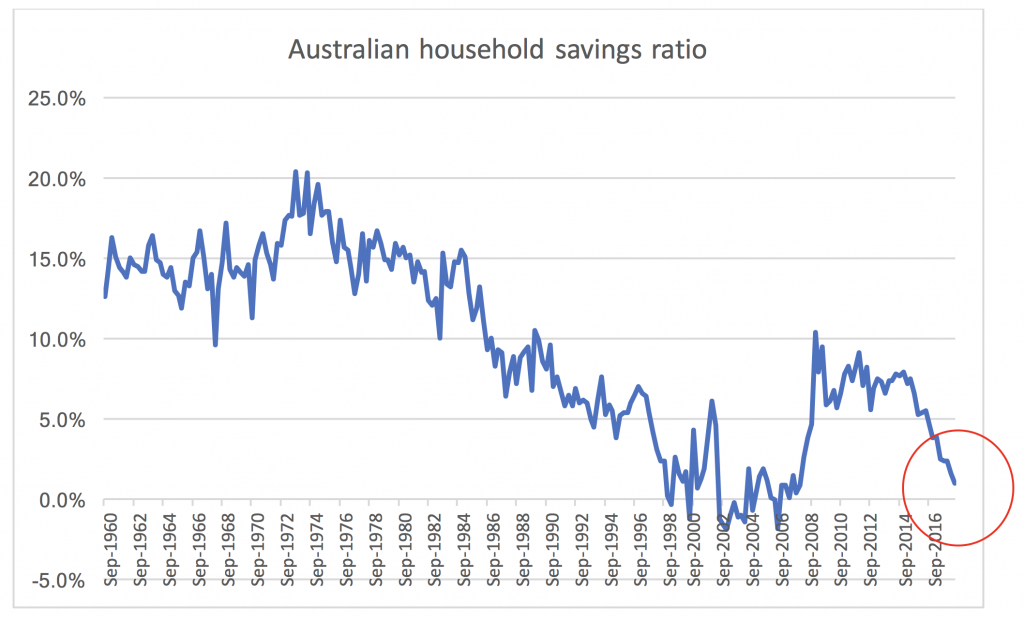 So what is happening?

As I have written previously, Australian consumption has benefited from the “wealth effect” from increasing property prices (i.e. people have felt comfortable spending more the more “equity” they have in the property and have been refinancing to release equity to spend periodically). Now when property prices are no longer increasing and have indeed turned negative on a national scale, consumers have not yet adjusted their spending behaviour and are instead sacrificing saving to continue to consume.

This is clearly not a sustainable source of growth as unless people will be prepared to (on average!) borrow to maintain or increase their consumptions level, they will eventually run out of funds once the savings ratio reaches zero…

The wealth effect worked well for companies benefiting from consumers spending when house prices were rising. Let’s see if it will hurt them to a similar extent when the wealth effect reverses and the savings ratio eventually cannot fall any more…

At Montgomery, we believe it will, and thus we have very minimal exposure to any consumer-oriented stocks in our portfolios.

You are reading an article about: Consumer discretionary, Market commentary