Which music streaming service is growing the fastest?

Which music streaming service is growing the fastest?

Did you guess Spotify? Apple Music? Those would be logical given they are the industry leading digital music streaming platforms. But those would also be incorrect. In fact, the correct answer is: Amazon Music.

As the Financial Times highlighted in recent days:

“The number of people subscribing to Amazon Music Unlimited has grown by about 70 per cent in the past year, according to people briefed on its performance. In April Amazon had more than 32 million subscribers to all its music services including Unlimited and Prime Music. By contrast, Spotify, the world’s largest streaming service with 100 million subscribers, is growing at about 25 per cent a year…”

What the Financial Times did not say is that Amazon is heavily subsidising the acquisition cost of customers to drive its rapid growth. In the UK, for example, you can now get four months of Amazon Music Unlimited for 99 pence (in Australia too). But hey, whatever it takes to build up a large subscriber base. After all, according to our industry sources, if a paid subscriber is still on your platform after 6-9 months and has formed a behavioural habit (not to mention their own curated playlists), then they become very unlikely to leave. So through this lens, the land-grab is on.

Interestingly, Amazon Music are trying to exploit a gap in the market of older consumers. According to the FT, around 14 per cent of subscribers to Amazon Music are aged 55 or older, compared with just 5 percent of Spotify’s customers, as shown below. 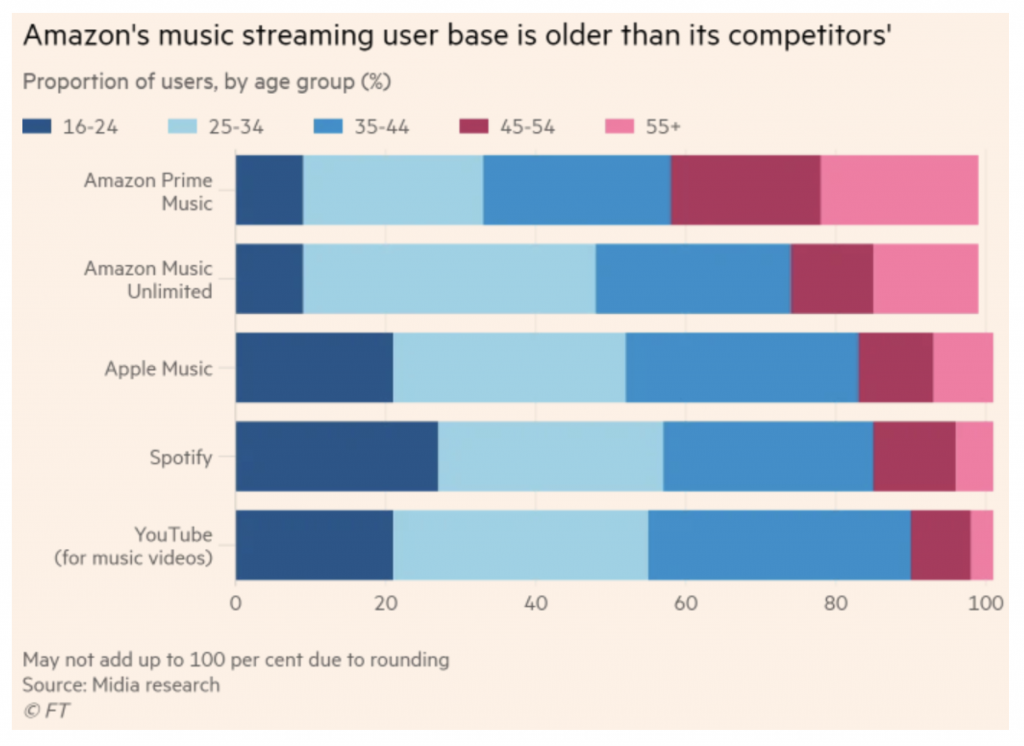 All of this should be music to the ears (yes, pun intended) of investors in the Montaka funds and the Montgomery Global funds. These funds own Vivendi (Euronext: VIV) which, in turn, owns Universal Music Group (UMG) – the world’s largest record label.

And UMG benefits from all paid subscribers – whether they subscribe to Amazon Music, Spotify, Apple Music, YouTube or even Tencent Music. This is because UMG owns the one asset in the value chain that cannot be recreated: the music.

The Montgomery Global Fund and Montaka own shares in Vivendi and Tencent. This article was prepared 12 July with the information we have today, and our view may change. It does not constitute formal advice or professional investment advice. If you wish to trade these stocks you should seek financial advice.