Where does Montgomery invest its cash?

Where does Montgomery invest its cash?

For those unaware, Montgomery has a dual objective in its flagship equity strategies being The Montgomery Fund and Montgomery Global Fund, and that is to outperform their respective, full invested equity benchmarks over the medium to longer term, whilst also aiming to preserve invested capital as much as we can in equity markets.

The later part of the objective is achieved in two ways; firstly, by only investing in quality businesses when they trade at a discount to what we think they are worth. We believe in an equity market sell-off quality businesses tend to recover quicker, and more importantly buying them at a discount gives us a value buffer or an additional layer of safety. Secondly, we also reserve the flexibility in investment mandate to hold higher levels of cash in the absence of ideal investment opportunities, being from 0 to 30 per cent of the portfolio’s value and a hard limit of 50 per cent in extreme circumstances. The below explores the movements of cash in each of the Fund’s, and where Montgomery invests the proceeds.

As depicted below, The Montgomery Fund and Montgomery Global Fund have respectively held 23 per cent and 18 per cent on average in cash since inception. As both graphs show, this isn’t a static 23 per cent or 18 per cent allocation, however is very actively managed according to changes in valuation of the portfolio, and changes in the opportunity set of each Fund. To focus on The Montgomery Fund, the largest amount in cash it has held since inception was 28 per cent on three separate occasions, February and November 2017 (2017 being the year of the “no-volatility” rally), and February 2014. Conversely, the strategy has only held under 14 per cent of cash on two occasions, being November and December 2018 (which some investors may have already put in their review). The Montgomery Global Fund similarly at its peak held above 25 per cent in cash on three occasions throughout 2017, in July, August and December. Conversely, it may surprise investors that the least amount of cash the Fund has held since its inception was at close to 8 per cent only back in July 2019.

Graph 1 – Variable month-end cash weighting in The Montgomery Fund since inception, to 30 September 2019 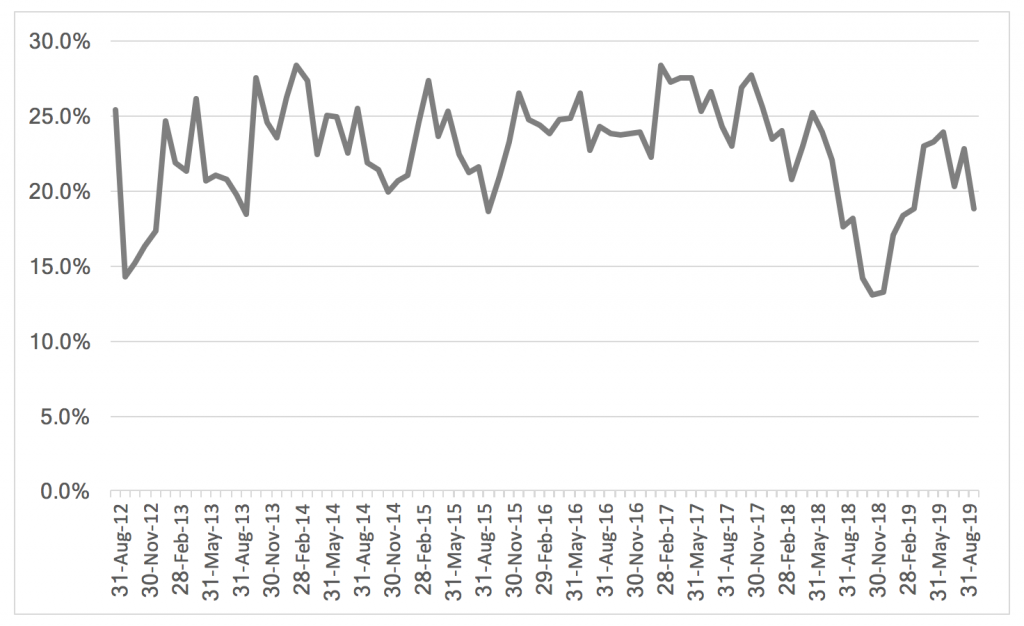 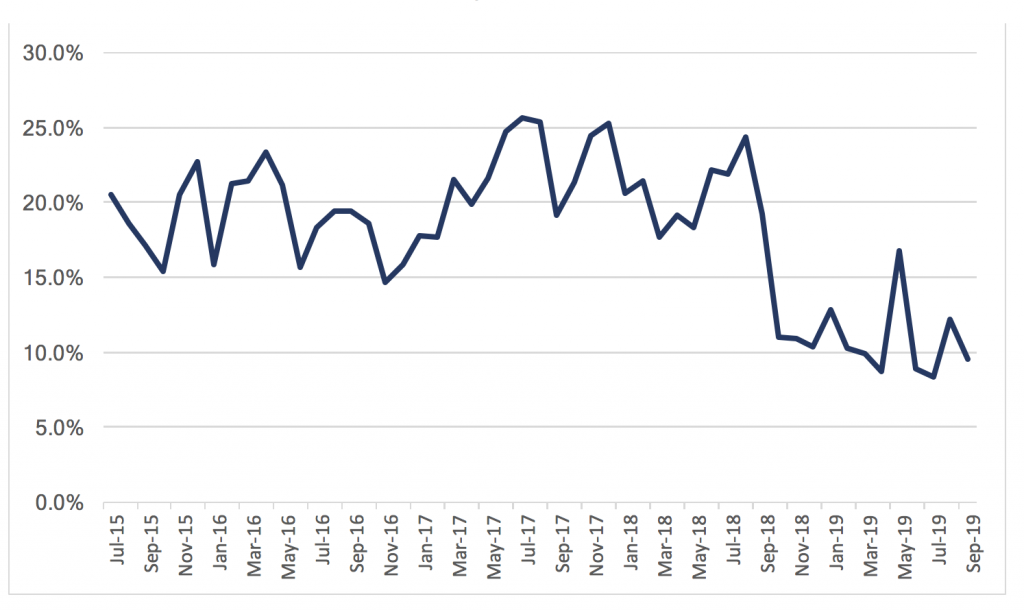 For the cash that we do hold, the investment premise is to not invest in cash because it generates a high rate of return (in fact, the return would be similar to what most investors get at their local bank), it is however because of the optionality cash provides over lower prices. Given this, we tend to keep a proportion of our cash in an “on-call” bank account with our custodian so we can deploy selectively across our portfolio and/or a business we have been tracking when prices fall, often due to volatility related to the market itself, or the market perhaps overacting to information specific to the company in the short-term. The remainder of the cash that we don’t require on-call tends to be invested across a cash equivalent ETF, such as Betashares ASX: AAA or iShares ASX: BILL, and a series of rolling short-dated term deposits (primarily 3 months) to maximise interest where we can. The cash in the portfolio does reduce the Beta of The Montgomery Fund and Montgomery Global Fund, meaning the strategies statistically tend to fall less than the market in a down month, since their respective inceptions.

Many investors would often ask, why would I pay a manager to hold cash when I can do that myself? The Montgomery response to this is that as fundamentally driven equity managers, we are in a strong position at the coal face of markets to decide on when value presents itself. The cash in the short-term can be a drag on performance in a rising market, but when there is a sell-off like in the last quarter of calendar year 2019, both The Montgomery Fund and Montgomery Global Fund had the flexibility to deploy cash in a market where many were selling, as captured below (being 9per cent and 14 per cent respectively). As such, having the flexibility to hold cash in an equity fund is valuable not only from a defensive perspective, but also for a long-term, patient investor who is then able to take advantage of short-term dislocations between price and value. 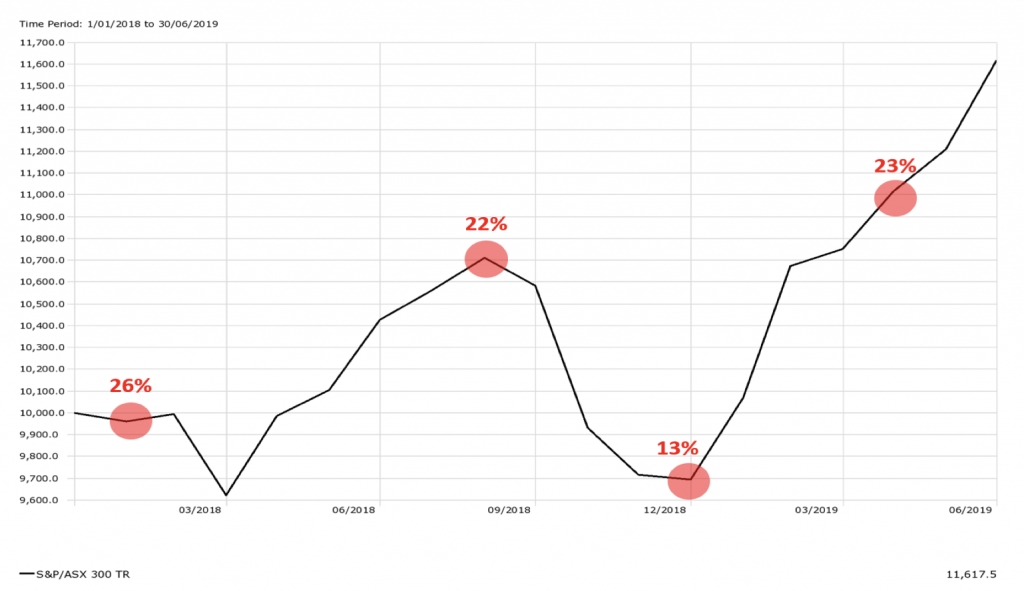 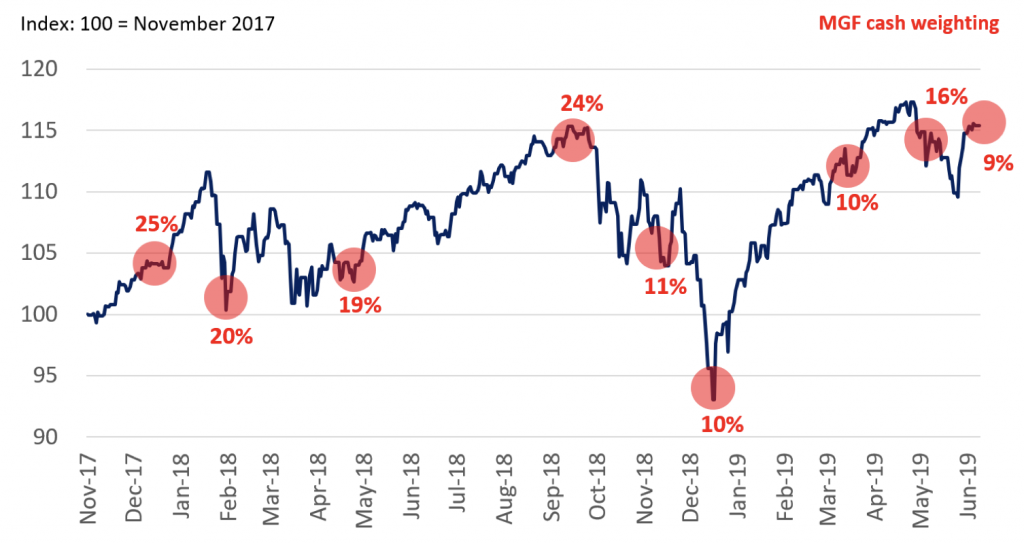 You are reading an article about: Investing Education, Montgomery News and Updates